For the past 50 years, the Africanized honey bee (sometimes referred to as the “killer” bee by sensationalist media stories) has been a public health concern in South and North America. Initially imported to Brazil in the mid-1950s, this invasive species spread northward into the United States by the early 1990s. While Africanized honey bees have not yet become established in North Carolina, their recent detection in Florida and other gulf-coast states makes their arrival in the coming years fairly likely.

To prepare for the introduction and possible establishment of the Africanized honey bees in this state, it is necessary for residents of North Carolina to become familiar with means of prevention and control of nuisance honey bee colonies. The following are some recommendations on how to reduce the chances of encountering Africanized bees, and what to do if they are encountered.

For Homeowners and the General Public

Skip to For Homeowners and the General Public

Africanized honey bees can be a public health concern because they are more likely to sting than “typical” honey bees. Like their European counterparts, however, Africanized honey bees will usually become defensive only when provoked or guarding their nest. Thus to prevent stings from honey bees, it is important to do two things. First, do not swat at bees flying around you, since it will likely provoke them and increase the chances that they will sting you. Second, reduce the likelihood that an Africanized honey bee colony will become established on your property by removing potential nest sites.

Most Africanized bees do not live in boxes managed by beekeepers, but rather in structures or other man-made cavities. With a little know-how, these potential nest sites can be removed or made unsuitable for bee habitation.

Carefully inspect your house and other structures for holes or cracks that could potentially lead to an internal cavity, wall space, attic, or crawl space, as bees can build their nests in any of these places. Prevent access to these areas by sealing the cracks with wire-mesh screen, caulk, or an expanding foam such as “Great Stuff” (Figure 1). Any gap greater than 1⁄8 of an inch could possibly provide access to bees, so be sure to seal any such crevice sufficiently to prevent bees from moving in.

Inspect other potential nesting sites around your house as well. In other regions of the country, Africanized bees have been known to inhabit such man-made cavities as tool sheds and water meters (Figure 2), since they often have small entrance holes and can provide an ideal space for a nest. Be sure to also clean up any junk piles or other debris that may create sheltered nesting sites. In particular, abandoned tires, over-turned flower pots, or inverted metal cans (Figure 3) serve as excellent nesting cavities for Africanized bees.

A few dozen bees visiting your flower beds is very typical and indeed beneficial for your garden. Bees can also collect water from bird baths or swimming pools, particularly during the heat of the summer. However, if hundreds of bees are clustered together or seen entering and exiting a single hidden location, it may be a sign that a colony has become established. If you are unsure, call a local beekeeper to come investigate. Contact your local Cooperative Extension center for a list of potential local beekeepers. Established colonies are different from exposed “swarms” hanging off of a tree limb. Swarm clusters are bees in search of a new nesting site, and are usually much less defensive that those protecting a hive. As such, swarm clusters (either African or European) are not very defensive, and they will likely fly off to their new home within a couple of days. Again, contact a local beekeeper if you locate a bee swarm.

If you have pets, livestock, or other animals living outdoors, you may consider taking precautions for them as well. Mass-stinging incidents of pets has occurred by Africanized bees in other areas of the country where the animals had no opportunity to escape or find shelter from pursuing bees.

Many people mistakenly believe that anything that flies and potentially stings is a “bee.” As a result, many wasp species—such as yellow jackets, European or Japanese hornets, and bald-faced hornets—are often mistaken for honey bees. In fact, many of these wasps can be even more defensive than Africanized honey bees, and many of the preventative measures outlined above can help reduce the chances that they, too, may become established on your property.

If you locate a nest on your property, note its location but don’t approach it. Bees and wasps are much more likely to react in defensive of their hive, so do not pose a threat to them.

Contact a licensed Pest Control Operator in your area. They will assess the problem, determine if they are honey bees or another species, and take appropriate action. If possible and appropriate, they will send in a sample of the bees to the North Carolina Department of Agriculture & Consumer Services so that they can be diagnosed as Africanized honey bees or typical European honey bees. We do not recommend that you exterminate the bees yourself.

Fermenting honey and spoiling wax can harm the structure in which the nest was located, so it is important to remove the combs as well as the bees. This often involves removing walls to excise the nest, as well as repair work after the combs are removed. Because larger nests can do greater harm, it is best to deal with the issue sooner rather than later.

In an emergency, seek immediate medical assistance. The fire department may respond with foam or surfactant spray to calmly and safely kill the stinging bees.

Figure 1. A “bee gap” around a water pipe. Seal the crack with wire mesh to prevent bees from moving in.

Figure 1. A “bee gap” around a water pipe. Seal the crack with wire mesh to prevent bees from moving in. 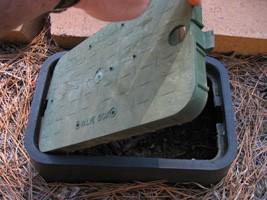 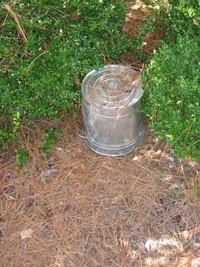 Figure 3. Inverted pails or flower pots should be removed to eliminate potential nesting sites for bees.

Figure 3. Inverted pails or flower pots should be removed to eliminate potential nesting sites for bees.

Skip to For Beekeepers

If you have any questions, or believe you may have some Africanized bees, please contact: