Responding to Water Quality Problems in the Neuse River

Skip to Responding to Water Quality Problems in the Neuse River

During the summer of 1996, hypoxic (low oxygen) conditions triggered excessive algal growth that caused major fish kills in the Albermarle-Pamlico Sound near the discharge area of the Neuse River. Researchers determined that excess nitrogen (nutrient enrichment) had caused the algal blooms. The North Carolina Environmental Management Commission passed rules, which the legislature adopted, to reduce nitrogen losses to the river (NCDENR 1997; NCDEQ 2018a; 2018b). The regulations became law in August 1998 and were known as the Neuse Rules. The Neuse Rules required a 30 percent nitrogen reduction from wastewater treatment plants, urban stormwater, and agricultural lands within five years. These rules served as a model for subsequent rules for other river basins (Tar-Pamlico) and watersheds (Jordan Lake and Falls Lake).

Skip to Implications for Agriculture

All agricultural producers in the Neuse River Basin became regulated under the Neuse Rules’ agricultural section. This rule gave producers a choice. They must implement mandatory conservation practices (best management practices—BMPs) or they must join a Local Area Plan. Under the mandatory BMP option, producers must select one of the following options: 1) a 50-foot riparian buffer (30 feet of trees, 20 feet of other vegetation), 2) nutrient management and a 30-foot vegetative buffer, 3) nutrient management and a 20-foot tree buffer, 4) nutrient management and controlled drainage, or 5) controlled drainage and buffers of either grass (30 feet) or trees (20 feet). (These BMPs are discussed in a summary document prepared by Gilliam et al. (1997)). Producers not wanting to choose the mandatory BMP option were allowed to sign up for the Local Area Plan during a one-year period following the rule’s enactment. In exchange for flexibility, however, the rules mandated accountability.

Under the Neuse Rules, a nitrogen accounting tool had to be developed. Numerous agricultural simulation models have been developed for research and crop management purposes. A variety of modeling approaches have been used to describe soil water and solute movement through soil systems, such as the Leaching Estimation And CHemistry Model (LEACHM) (Wagenet and Hutson 1984); the Decision Support System for Agrotechnology Transfer (DSSAT) crop model (Ritchie 1998); Groundwater Loading Effects of Agricultural Management Systems (GLEAMS) (Leonard et al. 1987); Agricultural Policy / Environmental eXtender (APEX) (USDA-NRCS 2011; Williams et al. 2012); and the Soil and Water Assessment Tool (SWAT) (Arnold et al. 2012). Some of these models are mechanistic, some are deterministic, some use Richards equation, while others use “tipping bucket” routines to describe soil-water movement. Some models have been developed to guide research, while others have been built to help with management decisions. However, even the simpler models are data intensive and need many soil and crop parameters, as well as climate data. In order to be calibrated, many of the water quality models require detailed temporal water quality and land use data. Much of the data needed for these models is unavailable.

Because of the inherent complex nature of simulation models, there was never any intent to model nitrogen losses in the Neuse River Basin from agricultural sources. In addition, farmers can only control a portion of nitrogen losses through crop selection, how much nitrogen is applied, and BMP selection and usage. Thus, any annual accounting tool would have to capture those factors that farmers can change and use readily available agricultural data. Rather, the intent was to produce a simple accounting tool based on biophysical processes, and available research data and production information.

A multi-agency team was formed in 1996 to begin to develop an agricultural nitrogen accounting tool that would meet the requirements of the Neuse Rules. The team included representation from North Carolina State University (NC State); the North Carolina Department of Environment and Natural Resources (now the Department of Environmental Quality or DEQ); the North Carolina Department of Agriculture and Consumer Services (NCDACS); and the USDA-Natural Resources Conservation Service (NRCS). To meet the Neuse Rules, the tool needed to fulfill four requirements: 1) estimate N loading to surface waters, 2) help local area management entities decide on the distribution of BMPs in their area, 3) track implemented BMPs, and 4) estimate the reduction in nitrogen losses due to the implementation of BMPs.

The interagency group reached consensus that the tool should: 1) be capable of field-scale use, 2) reflect biophysical processes occurring in the cropping systems, and 3) be able to operate with readily available inputs. The group also agreed to certain simplifying assumptions: 1) the majority of nitrogen lost in a cropping system moves as soluble nitrogen, 2) the majority of the available nitrogen within the soil system is used either by the crop or moved through the soil system into the shallow groundwater, and 3) the system is at semi-equilibrium. They then used information that was developed from agricultural research conducted over many years to construct the tool.

The Nitrogen Loss Estimation Worksheet (NLEW) was the accounting tool developed to meet the agricultural Neuse Rule requirements. Initially, the tool was built at the field-scale but it was recognized that, with a minimum of 120,000 fields and an average field size of 12 acres, the tools would need to be scaled to the county level and then aggregated to the river basin scale. The aggregate NLEW tool uses the same input factors as the field-based tool: soils, crops, fertilizer history, BMPs, and area affected by BMPs. Some accuracy was sacrificed to accommodate staff and funding restrictions when NLEW was scaled to the county level. The aggregate NLEW permits yearly basinwide estimates of percent N loss reduction based on BMP implementation, crop planting, and fertilization rates. But it is important to note that NLEW is not a complex, climate-driven model.

Input data for NLEW needed to be easily obtained. Inputs for the field-scale version of NLEW (Figure 1) were:

In NLEW, the established N fertilization rate for a crop on a particular soil is referred to as the RYE N Rate. The RYE N Rate is derived from the RYE table developed in 2000 by an interagency group that included NC State, NCDACS, NC DEQ, and NRCS. The RYE table provides three components: realistic yield expectations (best three out of five years of yield), nitrogen factors (pounds of nitrogen per unity crop yield), and the RYE Nitrogen Rate (RYE * N factor). This data covers 16 agronomic crops and all the agricultural soils in North Carolina. More recently, the RYE data table was updated for corn (Rajkovitch et al. 2015) to reflect newly developed cultivars with higher yields.

In the aggregate version of NLEW, soils are assembled into soil management groups based on physiographic region (coastal plain, piedmont, and mountains); drainage; productivity; texture; parent material; and landscape position. An average RYE N Rate is calculated from the individual RYE N Rates that compose each management group.

If the RYE N Rate is less than the Current N Rate, more N is applied than the crop needs and the extra N is partitioned into an Excess N pool that represents the N fertilizer not used by the crop. Using data from North Carolina nitrogen loss research, the development team decided that 5 percent of this excess N would be lost through surface flow processes and 95 percent would be lost through subsurface flow processes (Jacobs and Gilliam 1985). It was further assumed that the N lost through surface flow does not undergo any processes that may reduce its delivery. Research in North Carolina has clearly shown that nitrogen lost through subsurface flows can be reduced by certain BMPs (Jacobs and Gilliam 1985; Messer et al. 2011; Wiseman et al. 2014; King et al. 2015).

Optimal crop production requires the application of nitrogen beyond an amount that can be utilized by the crop due to the fact that no crop is perfectly efficient at utilizing available nitrogen. Agronomists have developed fertilizer nitrogen use efficiency (NUE) values to indicate the percentage of applied N that is actually utilized by the crop and can be recovered in crop tissues. Nitrogen use efficiency values were derived primarily from experiments conducted in North Carolina unless there were no data available (Table 1). In general, the NUE values were calculated for both the harvested portion of the crop and the stover. Since most NUE values were determined based on the stover from the prior year’s crop left in the field, we assumed that the system was at semi-equilibrium for net nitrogen mineralization. The paucity of data on RYE and NUE values for less common crops is a significant limitation to the current version of NLEW.

The Crop N Uptake (RYE N x 1- Crop NUE) is the nitrogen that is not utilized by the crop and may be leached through the soil to shallow groundwater (Subsurface N). NLEW is not a complex model, and we are not trying to account for all nitrogen sources or nitrogen cycling, such as net mineralization and denitrification. So we assumed that all of the fertilizer nitrogen not used by the crop moves below the root zone.

The two Subsurface N sources represent excess fertilizer applications and fertilizer not utilized by the crop, and they are summed. If a Cover Crop is planted, it is assumed that some of this excess nitrogen is absorbed by the unfertilized cereal cover crops. Much of this nitrogen absorbed by the cover crop will be released to the subsequent crop. Thus, the nitrogen reducing value assigned to the cover crop reflects nitrogen that is stored in the soil organic matter pool and released in an unpredictable manner over a long period. For a cropping season, we have assumed this nitrogen is completely removed from the system (Table 2). In order to receive nitrogen-reducing credit for cereal cover crops, farmers must plant the crop by November 30 and kill it no earlier than March 31 in the coastal plain or April 10 in the piedmont. The range for nitrogen-reducing values for cover crops falls between 5, 10, or 15 percent for wheat, oats, and rye respectively. If a Cover Crop is grown, the Subsurface N is multiplied by 1 - % N Reduction, leaving subsurface N that can be further reduced by additional BMPs.

Research at NC State has demonstrated that both riparian buffers and controlled drainage structures can reduce subsurface nitrogen flowing into ditches and streams by 40 to 95 percent (Gilliam et al. 1997). Subsequent research in North Carolina suggests lower nitrogen reduction values for buffers (Table 2) (Messer et al. 2011; Wiseman et al. 2014; King et al. 2015). In NLEW, the Total Subsurface N can be affected by either of these BMPs. However, the area affected by these BMPs may not be the same area as the field area. Therefore, if the area affected by the BMP is smaller than the field, the area must be determined. Again, the Total Subsurface N is multiplied by 1 -% N Reduction (BMP) (Table 2). The remaining Total Subsurface N Loss is added to the N Surface Loss to determine the Estimated N Leaving Targeted Area. This designation of a targeted area is not meant to imply an edge of a field or stream loading nitrogen loss, but rather the end of the accounting process. 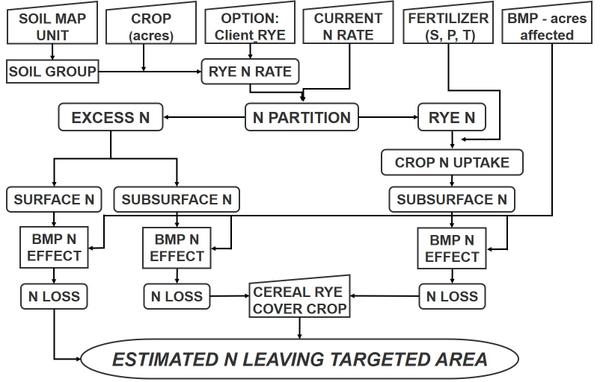 NLEW is a tool that accounts for agricultural nitrogen levels. It was developed to meet the requirements of a mandatory nitrogen reduction in the Neuse and Tar-Pamlico river basins. The tool also can be used throughout North Carolina for BMPs implemented with federal and state funds. It is difficult to show cause and effect changes in water quality based on monitoring, particularly when working at a river basin level (Gannon et al. 1996; Osmond et al. 1997; Osmond et al. 2012). In addition, water quality monitoring at a watershed or river basin scale is expensive and beyond the reach or capability of many agencies. The NLEW tool is an alternative to water quality monitoring to ensure accountability within the agricultural sector.