Alder lace bugs, Corythucha pergandei, are called alder lace bugs because they feed on alder and because the wings and thoraces are expanded, transparent, and subdivided by veins so that these insects appear lacy. They are sometimes referred to as birch lace bugs as birch is much more frequently used in landscapes. Females are about 1/8 inch long and tan with brown spots. Females lay their eggs by gluing them upright onto the lower leaf surface in groups. The eggs are sort of cone-shape, with a white cap on top. They are slightly inserted into the leaf. From the eggs hatch tiny, delicate, almost transparent nymphs that feed by injecting their saliva into the leaf and sucking out the predigested "soup." This causes as pale spot of empty plant cells at each feeding site. As they grow, nymphs become darker and spinier. They molt five times. A new adult emerges during last molt. Development probably takes two months from egg to adult. Little has been published on the biology of the alder lace bug, but it is likely we have only one generation per year here in North Carolina. Alder lace bugs are one of the lace bugs that overwinter in the adult stage under leaves, stones, bark, and other dry places. This makes sense as the host plants are deciduous so overwintering nymphs are likely to starve and newly hatched nymphs would have a daunting task to climb from leaf litter up to where new growth is appearing 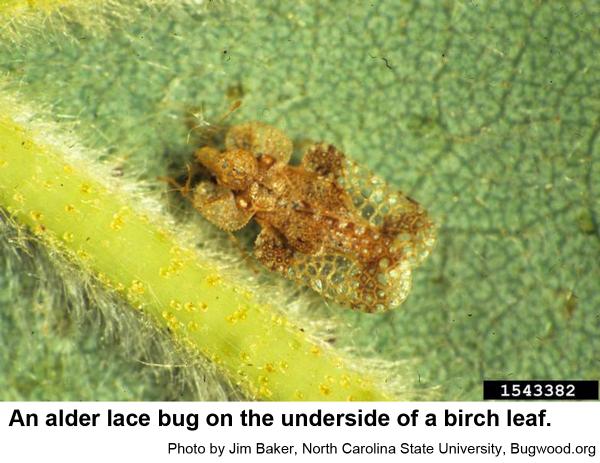 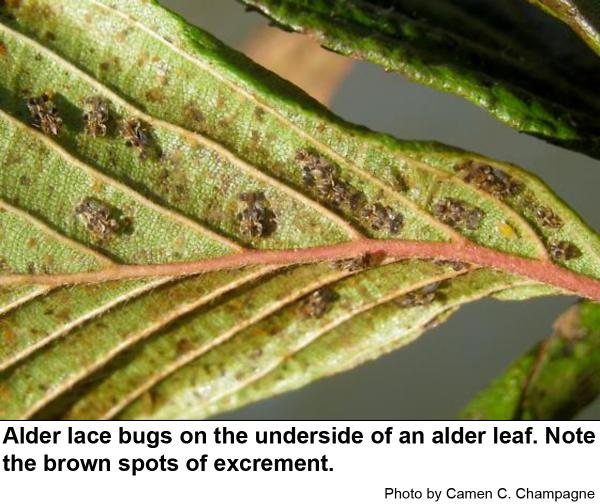 Large numbers of alder lace bugs can cause general yellowing of a whole birch tree.

Large numbers of alder lace bugs can cause general yellowing of a whole birch tree.

The alder lace bug infests alder and birch, plants in the same family and both of which are deciduous. Lace bugs cause the leaves to become speckled, bronzed or almost completely bleached out. Lace bug injury is similar to but coarser than thrips injury. Lace bugs also leave conspicuous drops of excrement ("fly specks") on the lower leaf surface. This is one way to tell lace bug damage from spider mite damage. Spider mites don't leave noticeable "fly specks."

Lace bugs are relatively difficult to control. Perhaps this is because the eggs are sometimes covered by a drop of excrement and are thereby protected from insecticides. At any rate, most pesticides available in the garden section of big box stores or garden centers that are labeled for landscape use should give adequate control if applied thoroughly. The population may resurge later perhaps because of eggs not killed by the first treatment.