The American dagger moth, Acronicta americana, is so called because of markings on the forewing that resemble daggers (if you have a good imagination). These moths have grayish-white setae on the wings and upper legs. The wings are marked with faint black zigzags and a narrow, black ring near the edge of each wing. A faint white band along the edge of the forewings is marked with black spots. It is most active from spring to early autumn. Dagger moth caterpillars are fuzzy with medium length yellow, yellowgreen, or even white setae. They also have four, elegant, slender, black "pencils" of setae that extend out from the first and third abdominal segments. A fifth pencil of black bristles extends near the rear of the caterpillar. It is reputed that these pencils may break off and become embed into skin. Toxins supposedly inside the hairs are reputed to cause a stinging sensation that may develop into a rash. Caterpillars may grow as long as 2 inches and are often found on the soil near their host trees from July through late October. We probably have two generations per year in North Carolina. 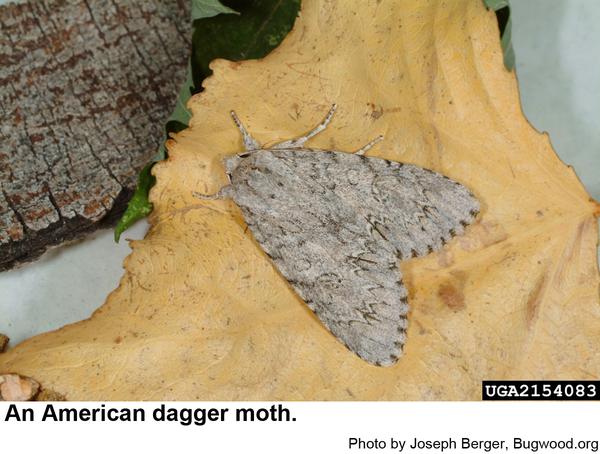 American dagger moths are medium-sized and found at lights at night.

American dagger moths are medium-sized and found at lights at night. 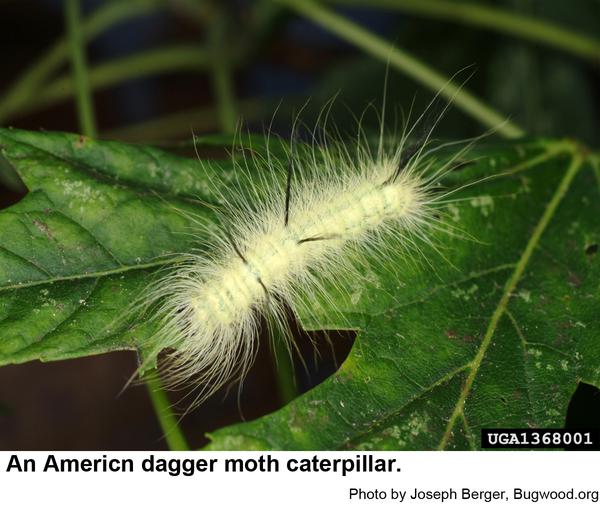 American dagger moth caterpillars have five noticeable pencils of black setae (the hind-most pencil is a little difficult to see on this specimen.).

American dagger moth caterpillars have five noticeable pencils of black setae (the hind-most pencil is a little difficult to see on this specimen.).

The dagger moth caterpillars feed on the leaves of alder, ash, elm, maple, oak, willow, and other hardwood trees in yards, parks, backyards, forests and woodlands throughout the growing season.

Only in rare instances have dagger moths become really noticeable pests. Most are noticed one or two at a time. Should they cause noticeable defoliation, most of the insecticides labeled for landscape use in residential landscapes will give more than adequate control. Dagger moth caterpillars that have matured and are searching for a suitable place to spin cocoons may appear to be resistant to insecticides. Such individuals can be trampled under foot.