The Anomala flavipennis beetle is a shiny scarab with ochre-brown wing covers and a reddish brown thorax. It is about the size of the Japanese beetle. This beetle is attracted to lights. The larvae are C-shaped grubs that feed on the roots of grasses including corn, wheat, and sorghum (in Northeastern Mexico, it is a major soil pest of corn and sorghum). In North Carolina, this species has one generation per year. The beetles emerge in the spring especially after rain. Females lay their eggs in the soil from which hatch tiny grubs. The grubs feed primarily on the roots of grasses. 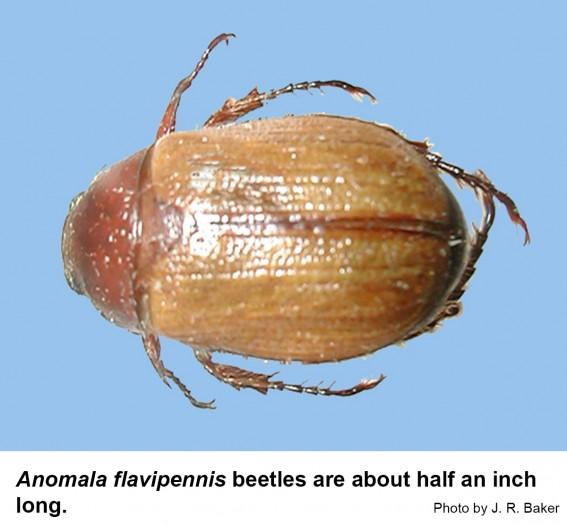 Anomala flavipennis beetles are about half an inch long.

Anomala flavipennis beetles are about half an inch long.

The only references to the feeding habits of A. flavipennis include feeding on the roots of grasses, corn, sorgham, and wheat. Other scarab grubs are sometimes pests of pine seedlings and boxwoods in nurseries, and it would not be surprising if A. flavipennis did feed some on the roots of shrubs and trees especially in the fall when annual grasses are dying back.

If Anomala flavipennis grubs become a nuisance in turf (more than 10 grubs per square foot), an insecticide labeled for insect control in home yards should give adequate control. Because they are atracted to lights, adults can be killed by using a light bulb suspended over a pan of soapy water at night.

For assistance with a specific problem, contact your local N.C. Cooperative Extension Center