Scale insects feed on leaves or branches of many ornamental plants grown in landscapes and nurseries. They attach themselves to a plant and feed by sucking fluids through straw-like mouthparts. Although many scale species from many families can be pests of ornamental plants the primary families are armored scales (Diaspididae), soft scales (Coccidae), and felt scales (Eriococcidae). The distinction between these families is important because behavior and management of each group can be different. Armored and soft scales live beneath waxy covers that protect them from predators, parasitoids, and pesticides. Armored scales live beneath a waxy cover that is not attached to the adult body. Thus the cover can be removed to reveal the scale insect hidden below. Armored scales typically do not move once they begin to feed and do not produce honeydew. In contrast, soft scales secrete a waxy layer over themselves that cannot be separated from their body. Soft scales also excrete sugary honeydew and may move from branches to leaves during their life cycle. Black sooty mold fungus often grows on this honeydew. Felt scales have waxy filaments and resemble mealybugs.

Armored scales are typically small and inconspicuous. The protective covers often blend well with plant bark so populations may become very large before being detected or a plant shows noticeable damage. Therefore, scouting to detect populations early is especially important on plant species that are frequently infested by armored scale. Armored scale damages plants by extracting plant fluids. This can reduce plant growth and vigor. Common symptoms of infestation include premature leaf drop and branch dieback (Figure 1). Infestations are common on trees stressed by physical damage, drought, temperature, or improper planting. Heavy infestations might kill a tree or shrub.

The goal of this page is to present information common to many scale species and help identify common scales. For more information on these species use links to their individual pages. For information on other armored scales search the Extension Resource Catalogue. 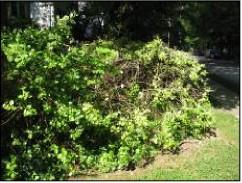 Euonymus scale – Look for euonymus scale on leaves and stems of Euonymus spp. but also pachysandra, hollies, and camellias. The female scale cover is oyster-shaped, gray, and 1-1.5 mm long. Males are white (0.75 mm) with no cover and 2 visible wings (Figure 4). In North Carolina there are three generations per year with first crawlers emerging in early May then in 6-8 week intervals. Typical damage symptoms include yellow spots on the upper side of leaves where scales are present beneath and sparse foliage from leaf drop (Figure 5).

Tea scale – Tea scale is most common on the underside of camellia and holly leaves. Female tea scale covers are brown and boat-shaped. Males are soft and white with a ridge down the back. Hatching occurs through much of the year rather than in discrete generations. Symptoms include yellow spots on the upper surface of infested leaves on camellia. Infestations are heavier on interior leaves.

Gloomy scale – Gloomy scales primarily infest the trunk and branches of red maple trees but can infest other trees. They are convex, gray, and occur in dense patches (Figure 8). Mature female covers have a dark spot (shed skin) just off center whereas male covers have a spot near the cover edge. They have one generation per year with crawlers active for 6-8 weeks in early and mid-summer. This complicates management by making it hard to target crawlers with a single insecticide application. Heavily infested trees become have dark gray bark, sparse canopies, and branch dieback.

Obscure scale – Obscure scale is most common on the trunk and branches of oak and hickory trees. It is relatively flat and gray. There is one generation per year. Crawlers are active for a variable and extended period in mid-summer.

Juniper scale – Juniper scale feeds on stems and leaves of junipers, cypress, false cypress, and arborvitae. Adult scale covers are circular and white with a yellow center 1-2 mm in diameter. There is one generation per year with crawlers present in May or June. Damage includes needles that are off color and may turn brown or die. 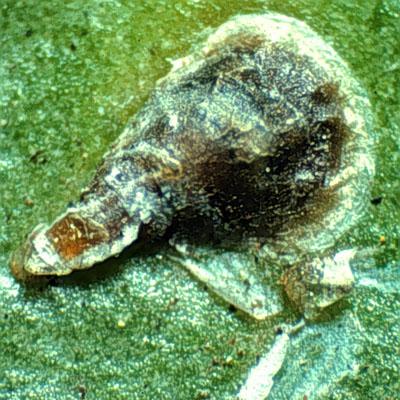 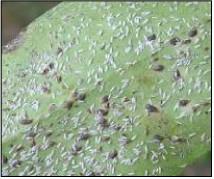 Figure 4. Male and female euonymus scale on the underside of a euonymus leaf.

Figure 4. Male and female euonymus scale on the underside of a euonymus leaf. 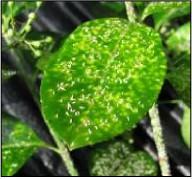 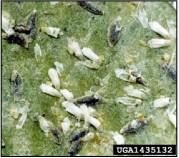 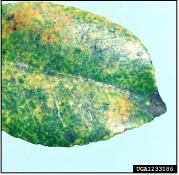 Figure 7. Yellow blotchy damage on the top-side of a camellia leaf from scale feeding below.

Figure 7. Yellow blotchy damage on the top-side of a camellia leaf from scale feeding below. 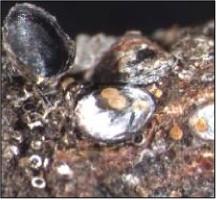 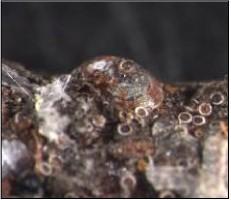 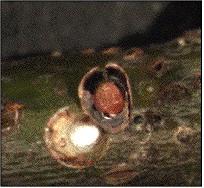 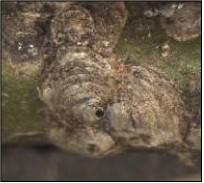 Scout for scales in early spring to monitor for crawler activity. Many natural enemies help reduce scale abundance and damage. If evidence of predation (scales chewed open) and parasitism (circular holes in scale covers) are present you may decide to monitor the populations rather than treat with insecticides or use a product with less impact on the beneficials. When insecticide applications are necessary, dormant oil applications can be made in winter to kill scales on trunks and branches. During the growing season target the crawler stage with horticultural oil, systemic insecticide, insect growth regulator, or other insecticide labeled specifically for armored scales. Imidacloprid does not kill armored scales even though it will kill soft scales and felt scales.