Demotina modesta, is a small (about 1/8 inch long), stocky, brownish leaf beetle. It differs from our many native leaf beetles in that its upper surface is covered with narrow, recurved scales just visible through a hand lens. It also differs in that the margins of the pronotum have small teeth along the outer margin. Some specimens have a large, dark, central spot on the wing covers with two smaller spots on each side slightly toward the rear. This Asian species was introduced into the southeastern United States around 1970. It feeds primarily on oaks and could appropriately be called the Asian oak leaf beetle. Demotina modesta is a summer breeder and probably hibernates as larvae or pupae. Without mating (no males have been found), females lay fertile eggs singly on the undersides of leaves and cover the them with excrement. Newly hatched grubs drop down and dig into the soil to feed on roots. The larvae are stocky rootworms with short legs and a somewhat curved abdomen. 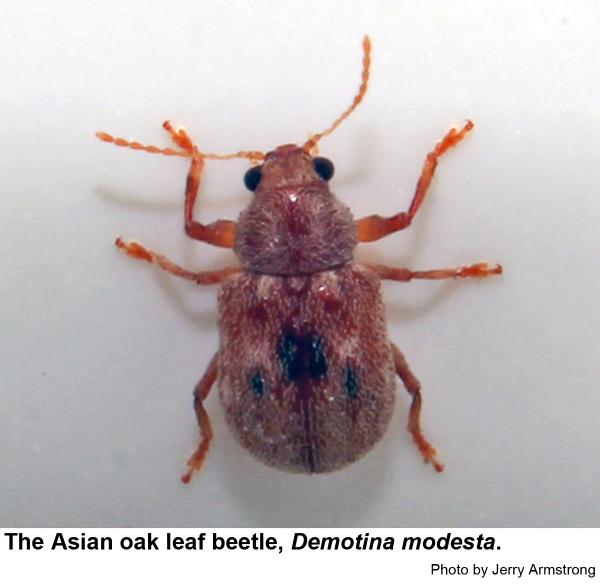 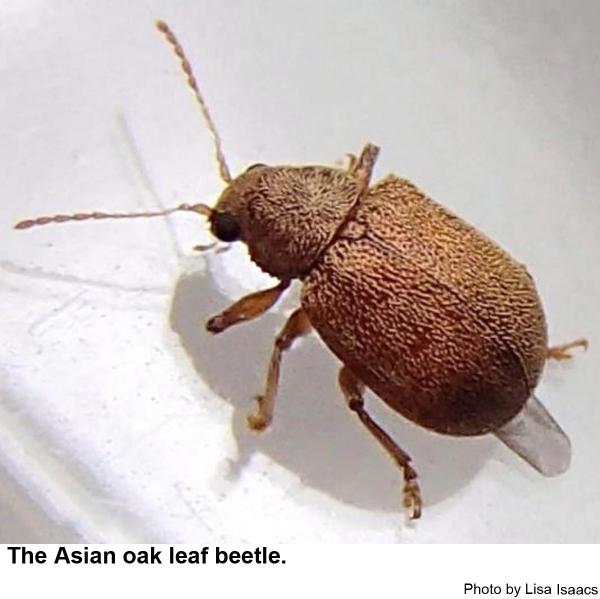 The Asian oak leaf beetle can become abundant on oaks as well as the related Japanese Chinquapin, Castanopsis cuspidata. Leaf curl and distortion caused by these beetles seems to be unique among the leaf beetles that feed on oaks.

If the Asian oak leaf beetle becomes to be a problem, it is highly likely to be susceptible to various pyrethroid insecticide labeleds for use in the landscape such as permethrin, bifenthrin, or lambda cyhalothrin. These pyrethroids are available in most big box store garden supply areas. They are very toxic to fish so avoid contaminating pools, ponds, or streams. Bifenthrin and lambda cyhalothrin are also toxic to spider mites and eriophyid mites. However, prolonged applications of pyrethroids may allow populations of soft scales such as kermes scales or oak lecanium scales to increase dramatically because pyrethroids are toxic to beneficial insects that control soft scale populations. Casey Scarl and Whitney Cranshaw at Colorado State University showed that an application of a systemic insecticide such as imidacloprid (also available for home use) can give season-long control of leaf beetles. However, imidacloprid may enhance spider mite problems. I predict that in any particular landscape should Demotina modesta appear, it will be a noticeable pest for a year or two and then will fade away for years or decades as its diseases and parasites become abundant.