The azalea lace bug, Stephanitis pyrioides, is the most frequently reported insect pest in the landscape. They are called “lace” bugs because the wings resemble lace. The wings are mostly transparent with some dark markings. These bugs are about 1/8 inch long. This insect usually spends the winter in the egg stage inside the leaf covered with a drop of excrement that hardens into a varnish-like shield. Eggs are usually deposited in the tissue of a young leaf along the midrib or a large vein. Each egg is inserted in the tissue with its neck slightly above the leaf surface. Up to 90 eggs have been found in a single leaf. Nymphs are almost colorless at hatching but are soon dark and spiny. They molt six times before reaching the adult stage. Azalea lace bugs, eggs, and nymphs are found on the undersides of leaves. We have at least two generations per year in North Carolina. 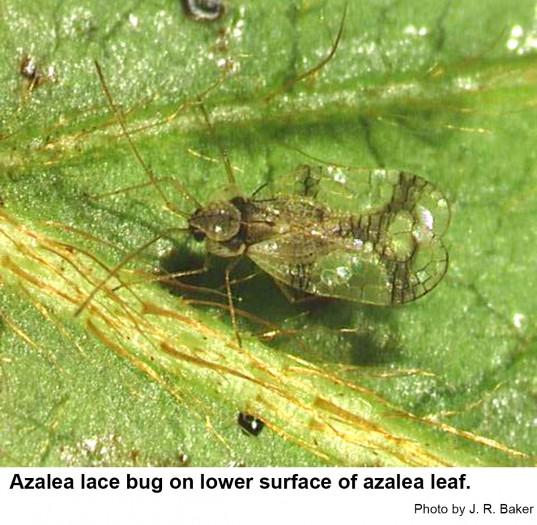 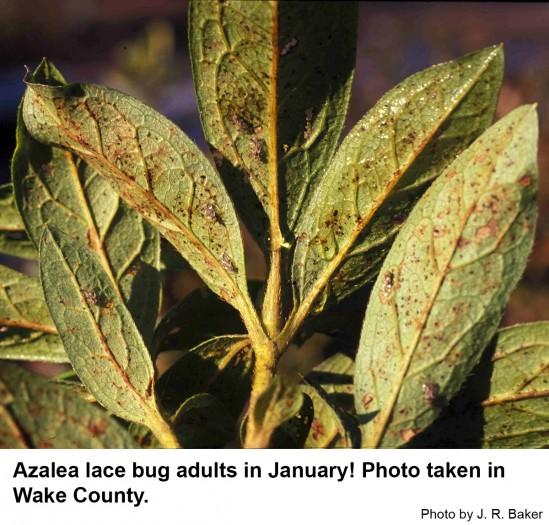 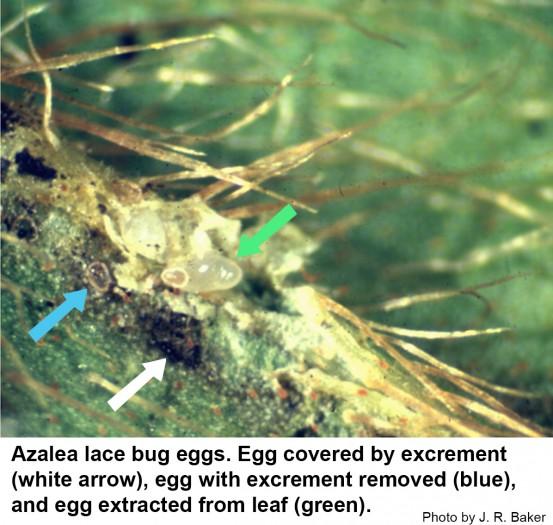 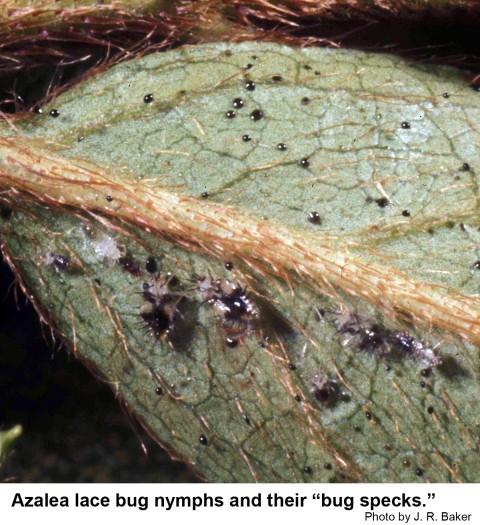 Evergreen azaleas are most likely to be infested although deciduous cultivars and mountain laurel are also attacked by the azalea lace bug. Lace bugs feed by inserting their needle-like mouthparts into leaves and injecting saliva. When the lace bug sucks out the predigested cell contents, the empty cell walls form a noticeable pale spot. After what seems like a short time, lace bugs cause the leaves to become completely bleached out and bronzed. The spring generations seem to do the most damage. Lace bug injury is similar to but coarser than thrips injury. Lace bugs also leave excrement (bug specks) on the lower leaf surface. This is one way to tell lace bug damage from spider mite damage - spider mites do not leave bug specks.

Azalea lace bug eggs are plagued by tiny parasitic wasps. Populations of the predaceous azalea plant bug may also reduce problems from lace bugs. However, these natural control agents often fail to prevent noticeable damage. Azalea lace bugs can be relatively difficult to control. Perhaps this is because the eggs are inserted into the leaf tissue and covered with a drop of varnish-like excrement and are thereby protected from insecticides, especially at this time of year. It's best to treat in early spring which may keep later populations low. Because the spring generations seem to do the most damage, it is a good idea to monitor the new growth for the first signs of damage. Orthene is relatively effective for lace bug control, but it is somewhat harsh on predators and parasites. Insecticidal soaps and horticultural oils are toxic to nymphs and adults, but they do not kill eggs nor do they provide any residual control (and thus are safer for parasites and predators). Safari and imidacloprid are systemic insecticides that can be applied to the soil surface to kill the lace bugs above. Acelepryn and Flagship soak into the leaf, but do not move systemically in the plant.