The azalea plant bug, Rhinocapsus vanduzeei, is a small bug about 1/8 inch long. It is brown to dark brown on top and orange underneath. It feeds primarily on the anthers of azaleas and plants related to azaleas. The bug feeds mainly on or within azalea flowers but can be found resting on the foliage. When disturbed on a leaf, the bugs quickly dodge to the underside, then pop up on the opposite edge. Immature azalea plant bugs are smaller and bright red with white antennae and white feet. On certain red-flowered varieties of azaleas the nymphs are well camouflaged. Females lay their eggs in azalea stems and the bugs seem to die out by mid-July. The eggs hatch about the time that azaleas bloom. The newly hatched nymphs feed mainly on the petals and stamens. After azaleas have finished blooming, adult azalea plant bugs disperse to raspberries and a variety of ornamental trees and shrubs such as spirea and plum. 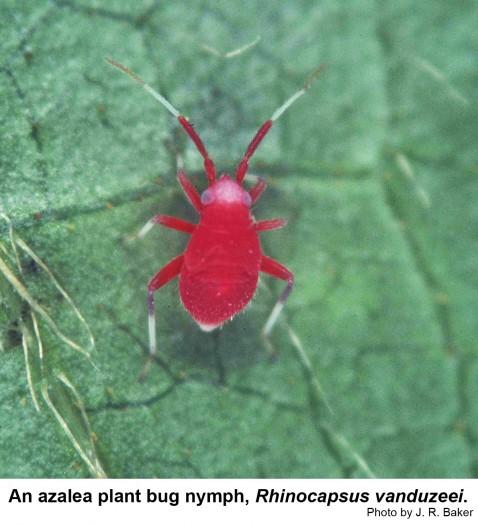 The newly hatched azalea plant bug nymphs feed mainly on the petals and stamens where they have been observed to pierce both the filaments and anthers and even shed pollen grains. After azaleas have finished blooming, these bugs disperse to raspberries and a variety of ornamental trees and shrubs such as spirea and plum. These bugs also sometimes bite people as they tend to their azaleas (not with extraordinary pain, but the bite causes a noticeable, itchy welt).

Although this pest is not as destructive to the appearance of azaleas as is the azalea lace bug, people may object to being bitten. A number of pesticides are labeled for plant bug control all of which should work well. Sevin is probably the most readily available. Home garden pesticides containing pyrethrins and resmethrin also should work well.