The barklouse Cerastipsocus venosus is found throughout North Carolina whereas Archipsocus nomas is found in southeastern North Carolina. Barklice are drab to dark insects usually with wings which are held roof-like over the body (Figure 1). They have round heads, conspicuous antennae and are up to 1⁄4 inch long. Immature barklice resemble the adults except they lack wings and they are smaller (Figure 2). Barklice often occur in dense groups. Barklice eggs are tiny and round or oval. Eggs are usually laid in clusters may be covered by silk and debris. On rare, severe occasions with Archipsocus nomas, branches and trunks may be shrouded with a light layer of silk. Cerastipsocus venosus eggs are encrusted by alimentary excretions but are not covered by silk. 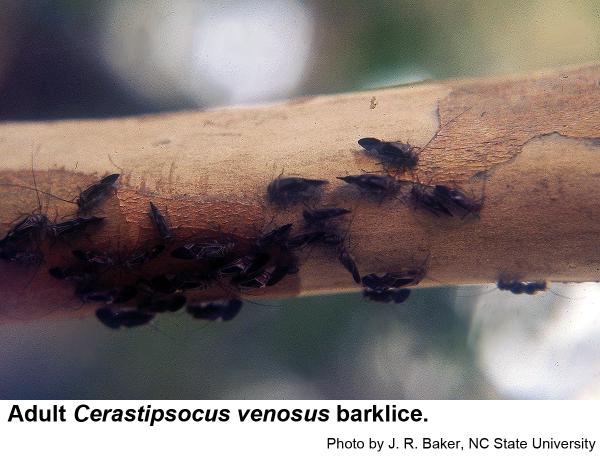 Figure 1. Adult barklice are dark and have wings.

Figure 1. Adult barklice are dark and have wings. 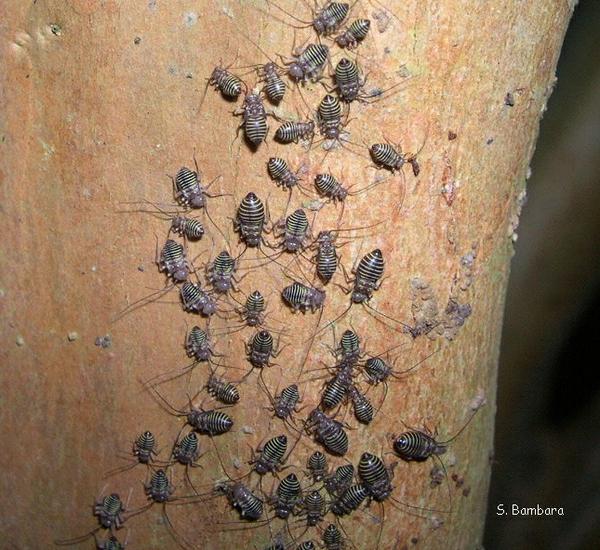 Barklice are most often noticed on smooth-barked shrubs and trees such as crape myrtle and young oaks although they occur on a variety of hardwood ornamental plants. Barklice sometimes occur in dense groups on the bark of ornamental trees, occasionally in large numbers. They are sometimes called "bark cattle" because they often move en masse somewhat like a herd of cattle when disturbed (Figure 3). Barklice do not feed on living plants. The only "damage" they cause is the concern shown over their presence by alarmed gardeners. Archipsocus nomas sometimes spins enough silk to detract from the appearance of infested trees (Figure 4). Barklice feed on lichens, decaying organic matter, dead insects, molds, fungi and pollen. They do not harm living plants. Cerastipsocus venosus roams freely about on the bare bark. Archipsocus nomas spins a silken web under which these barklice develop. Recently emerged adults develop through a teneral period in which the wings expand and harden. Then there is a period of celibacy. After a sometimes elaborate courtship dance, barklice copulate during which a spermatophore is transferred to the female. Archipsocus nomas males transfer a solid spermatophore. Cerastipsocus venosus males are thought to transfer a liquid spermatophore. Females lay eggs from which hatch nymphs. Nymphs gradually develop through four to six instars before molting into adults. Barklice probably overwinter as eggs in North Carolina. Both adults and nymphs congregate to feed, and in the case of Archipsocus nomas, to build the communal web. 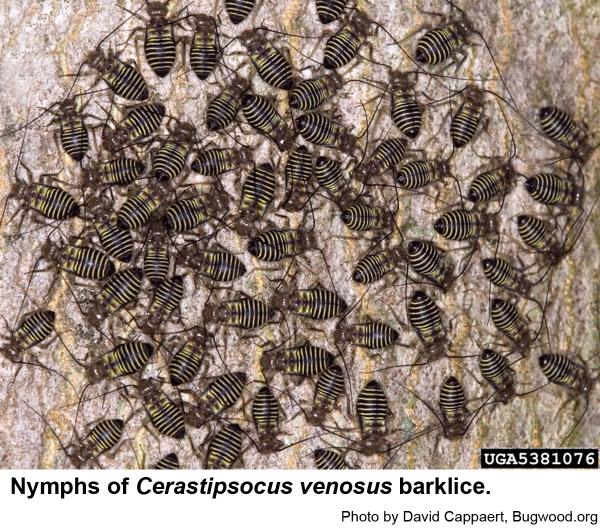 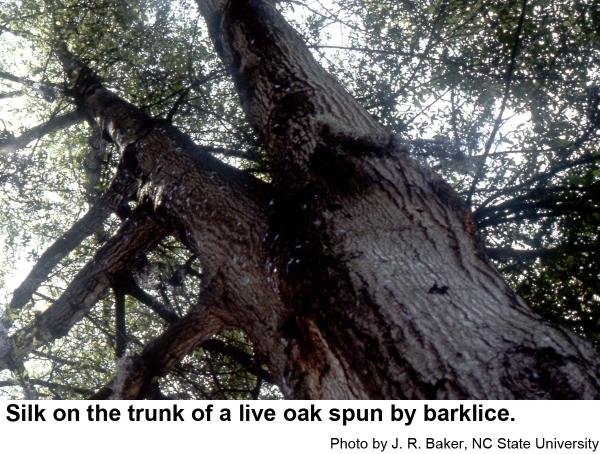 Since barklice do no harm to the health of ornamental trees and shrubs, no pesticide application seems necessary. A strong stream of water from a garden hose would probably disrupt and disperse a barklouse colony to the point they would no longer be noticed, but there is no need to harm these creatures. Enjoy!