Determining the proper spacing of drain ditches or subsurface drains can be a tedious task. Producers, land owners, farm managers, and contractors should be aware of the soil types in the field at which installation of a new drainage system is being considered. Soil texture plays a vital role in determining the proper drainage spacing. You need to determine the soil layering and textural classes to select the proper drain depth. Typically, subsurface drains and field drainage ditches are installed as deep as the outlet will allow to increase drain spacing and to reduce material and installation costs. However, you should not locate subsurface drainage pipes in a restrictive soil layer; doing so could result in total failure. We recommend first performing a soil profile assessment and comparing the results to the Natural Resources Conservation Service (NRCS) soil database, Web Soil Survey.

Hydraulic conductivity is key to determining the proper drain spacing and is directly related to the soil texture. The NRCS database contains information on the estimated values of the hydraulic conductivity for different soil series. When feasible, you should determine the hydraulic conductivity based on site-specific measurements. It is also critical to consider the design subsurface drainage intensity (DI), which varies with climate and therefore location; for example, rainfall during the growing season is greater in North Carolina than in Illinois, so the DI in North Carolina should be somewhat greater than in Illinois (Skaggs et al. 2006). The DI is the rate at which water can move through the soil profile to the drain when the water table midway between drains is at the ground surface (Skaggs 2017). Research at North Carolina State University has shown that the average DI required for row crops in eastern North Carolina varied from 0.4 in/day for lands with good surface drainage to 0.5 in/day for poor surface drainage (Skaggs and Tabrizi 1986; Skaggs 2017). You should install subsurface drains at a depth and spacing such that the rate of drainage through the soil to the drain is equal to the DI.

The design drainage coefficient (DC) is another important factor affecting drain spacing. The DC is the theoretical maximum amount of water that can be removed by the drainage system in a 24-hour period. The DC quantifies the hydraulic capacity of the installed drainage system; it should not be confused with DI. You should choose the size (diameter) of the main or collector drains that satisfies the DC. The DC should not be less than the design DI and should be greater than DI if provisions are made for surface runoff to enter the laterals, mains, or submains; this value is typically expressed as the depth of water that can be removed per unit area in a day. Most subsurface drainage designs for eastern North Carolina are based on a DC of 0.5 to 1.0 inch per day. The value selected will depend on the purpose of the system (for example, drainage, subirrigation, or surface inlets) and the value of the crop being produced.

Figure 1 gives typical spacing for 4-foot-deep subsurface drains based on soil textures and relative conductivities adapted from the American Society of Agricultural and Biological Engineers EP260.5 Standard (2015). The sample values will give you a good starting point for proper selection of drain spacing. However, the selection of proper spacing is also a function of the drain depth, which is typically controlled by the outlet conditions. Shallower drains will require narrower drain spacing for the same DI.

We strongly recommend consulting with a professional on the design of the drainage system before installation. Drainage design equations and hydrologic models such as DRAINMOD are good tools for planning water management systems. DRAINMOD is a computer model that can predict crop yield benefits using historic weather conditions, site-specific soil information, and drainage system design criteria to evaluate your long-term potential return on investment. 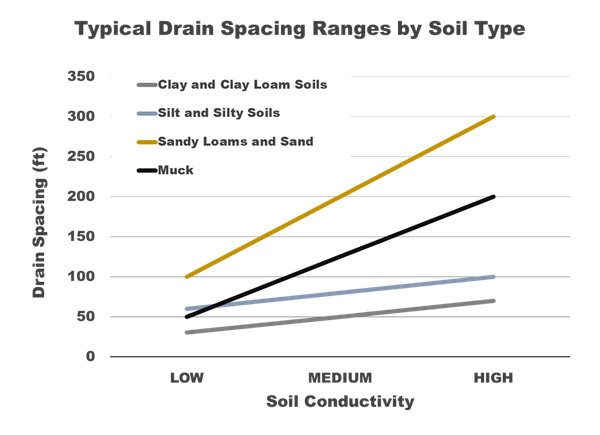