The basilica orbweaver spider, Mecynogea lemniscata, has a body about half inch long. It is brown except for the top of the abdomen that has lengthwise outer white wavy lines with narrow red bands just inside and black and yellow markings in the middle. It is named "basilica" because of its web part of which is dome shaped. The whole web may be 20 inches across. Its spiderlings weave perfect orb webs. As they mature, spiderlings tend to spin more specialized webs characteristic of adults. Like many of the orbweaving spiders, it removes its web at the start of each day (It seems to me like a lot of effort to have to spin a new web each night!). But the basilica orbweaver spider removes her web with a different twist. This spider wraps the old web tightly around her egg mass each time she lays a batch of eggs. These egg masses come to resemble strings of beads or silken tubes with “beads” of egg masses within. Orb weaver spiders have eight tiny eyes, but they are reputed to have poor vision. They locate their prey by the vibrations of the web caused by the struggles of their hapless prey. 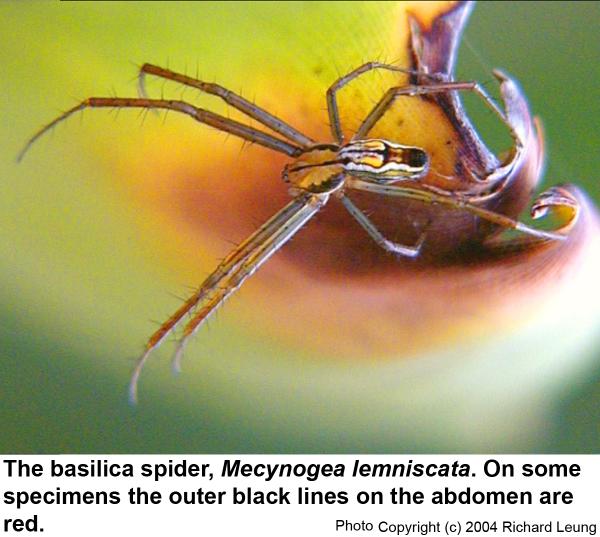 Some basilica orbweaver spiders may have red lines on the abdomen.

Some basilica orbweaver spiders may have red lines on the abdomen. 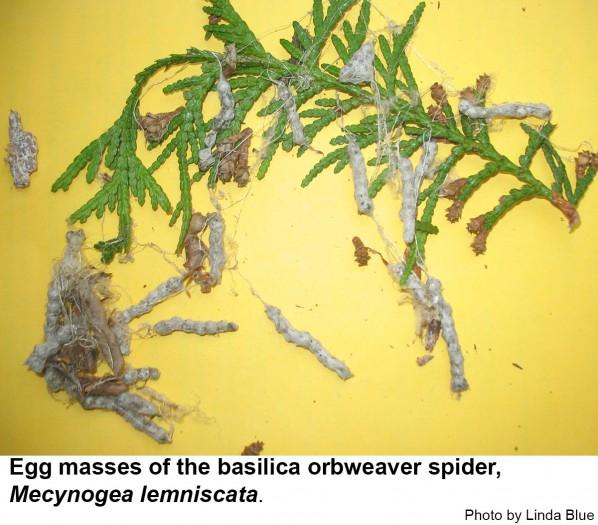 Basilica orbweaver spiders do not feed on plants. Their only “damage” is the alarm caused by walking into a web during the night, or by the egg masses that might be considered unsightly. On the other hand, because spiders feed primarily on insects, they can be considered beneficial.

Orthene is toxic to spiders and is labeled for landscape use should one decide to spray.