The bean leafroller skipper, Urbanus proteus, is also called the longtailed skipper. Skippers are insects sort of intermediate between butterflies and moths. Skippers tend to visit flowers during the day like butterflies, but they fly with a skipping motion. Another difference is that antennae are further apart on the head, and the antennae curve back at the tips whereas butterfly antennae are knobbed but not hooked at the tip. Bean leafroller skippers lay about 80 eggs on the lower leaf surface singly or in small groups. Three or four days later, the tiny bean leafrollers hatch and begin feeding.This species is called the bean leafroller because the caterpillar stage feeds on beans where older leafrollers roll the leaf up and feed within that shelter. Mature caterpillars are green speckled with black and yellow. There is a dark line down the back and two yellow lines down the upper sides. Skipper caterpillars are unusual in that they have a distinct neck and a relatively large head. The caterpillars mature in about two weeks and pupate inside the leaf roll. In a week or three, a new generation of longtailed skippers emerges from the pupae. 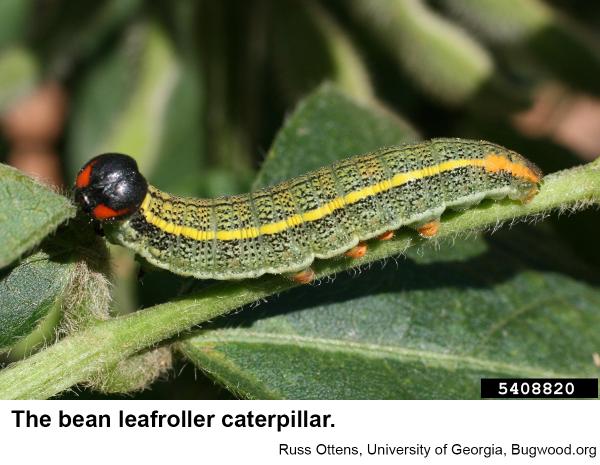 The bean leafroller is usually hidden in a rolled leaf.

The bean leafroller is usually hidden in a rolled leaf. 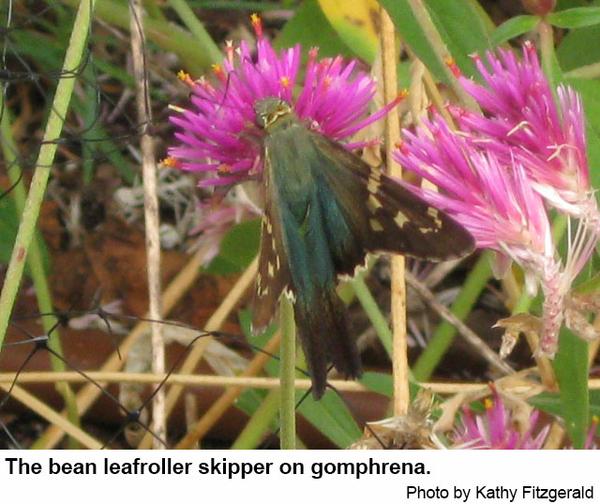 The bean leafroller caterpillar stage feeds on legumes and a few other crops where it rolls the leaf up and feeds within that shelter. Look for ragged and rolled up leaves. The bean leafroller is a very minor pest of beans in North Carolina, but it can be a real nuisance further south.

Trichogramma parasites attack bean leafroller eggs. Tachinid flies and a tiny wasp parasitize bean leafrollers and paper wasps and predaceous stink bugs feed on them. A nuclear polyhedrosis virus is fatal to bean leafrollers as well. Sevin or some other pesticide labeled for vegetable pest management should give more than adequate control.