Similar to zoysiagrass mites, bermudagrass (Eriophyes cynodoniensis) mites are tiny, worm-like arachnids present in the soil that can occasionally cause damage to turfgrass. They are generally white or cream-colored and so small that they usually require a hand lens or microscope to see.

Prevalence of bermudagrass mite damage has increased over recent years, likely a result of the use of more narrow-spectrum products, and changes in irrigation practices. Damage is, as far as we know, specific to bermudagrass and thus, is more prevalent in the southern United States. All bermudagrass cultivars can be affected by mite damage although Tifway is particularly susceptible.

Adult mites infest and lay eggs under the leaf sheath. Eggs hatch and a clear, larval life stage is present for a very short period of time. Mites then progress through two nymphal stages (protonymph and deutonymph) before becoming an adult. The entire process takes between 5-10 days, depending on temperature. Mites reproduce many times a year and generate large numbers of offspring so the potential for rapid establishment and infestation is high.

Damage can be caused by both the immature and adult life stages. Generally, mites begin feeding as temperatures increase in the spring when bermudagrass breaks dormancy. Early signs of damage occur when stem length between plant nodes becomes reduced, creating little space between leaves and buds. This results in a rosette or tuft commonly referred to as “witchesbrooming” (Fig. 1). Once the tuft forms, it is not reversible and can reduce the aesthetic, uniform appearance of the turf canopy. Witchesbrooming causes stunted stolons which cannot be fixed with increased fertilization and irrigation. Over time, infested turfgrass will yellow and brown, gradually thinning and creating bare spots at the soil surface. 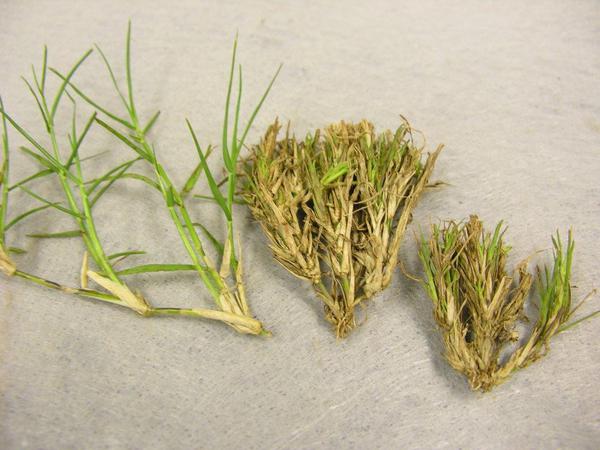 The easiest way to monitor and identify bermudagrass mite damage is to scout for evidence of witchesbrooming in areas where bermudagrass appears stressed. Mites can be observed sometimes by peeling back the leaf sheath and examining the plant for eggs or immature activity.

Cultural Control: General cultural control practices (irrigation, adequate sun exposure, fertilization, thatch and clipping removal) can improve the appearance of the turfgrass with early signs of infestation. However, as mentioned previously, these practices cannot offset damage symptoms of severe infestation. High nitrogen levels are often associated with increased mite damage so it is important to perform a soil test and adhere to recommendations for that particular site. Proper sanitation of mowing equipment is crucial to preventing the spread of this pest to other areas. Replacing common and hybrid bermudagrass with other warm-season grasses is an option in areas that are severely infested.

Biological Control: There are no known natural enemies specific to bermudagrass mites. However, mite populations in general are affected by a number of predatory mites and pathogenic fungi which can help reduce numbers. However, these generalist natural enemies are negatively affected by repeated pesticide applications and their numbers can be low in areas that regularly receive these inputs.

Chemical Control: Chemical application for bermudagrass mite control is not generally very effective. Pesticide trials from Clemson indicate that bermudagrass mite populations can be controlled with repeat applications of abamectin (Divanem) but it is unclear when is the best timing for these applications (spring vs. summer). Research suggests that applications should be accompanied with a surfactant to ensure product penetration through the gaps between stems and leaf sheaths.