The black twig borer, Xylosandrus compactus, is a very small (1⁄16 inch), shiny, black, cylindrical beetle. Twig entrance holes are about 1⁄32 inch in diameter and usually found on the lower surface of the twig. Eggs are extremely small, oval, white and translucent. Black twig borer grubs are white and legless. The body of young grubs is pointed at the rear. Older grubs have a brownish heads and round tails. The pupa is about the size of the adult and clearly shows the legs, wings and head.

Side view of the black twig borer female.

Side view of the black twig borer female.

The black twig borer is one of the few ambrosia beetles that attacks healthy plants! Female beetles attack twigs or branches and bore in to the pith (or if the twig is large, bore into the wood about half to one and one half inches). If a twig is small, usually only one female attacks it. If the twig is more robust, up to 20 females can attack it. Black twig borers are capable of laying eggs without mating (Parthenogenesis but unmated females produce male eggs only.). Males do not leave the brood chamber as they cannot fly. Small twigs (< 5⁄16 inch) are usually infested by only one beetle and such twigs usually die. Branches up to 7⁄8 inch may be infested by as many as 20 females. Such branches may die or may form a canker around the infested area. Cankers may be as long as nine inches. Wilting symptoms usually appear just weeks after the first attack. After females bore into a twig, they form a small chamber in which they lay a loose cluster of eggs. Black twig borers introduce a fungus, Fusarium solani, into the burrow that produces a white fungal "ambrosia" on which the tiny grubs feed. The grubs apparently feed on the pith as well. Development takes 28-30 days from egg to adult during the growing season. In winter, development is much slower. Females begin laying eggs as the weather warms in spring and continue until the weather cools in autumn. Grubs are most numerous during the growing season. Pupation and mating takes place in the infested twigs. They overwinter as beetles inside the stems. After females emerge from a twig, they usually bore into the next twig within 30 minutes. The heaviest beetle flight coincides about the time that dogwoods are flowering. 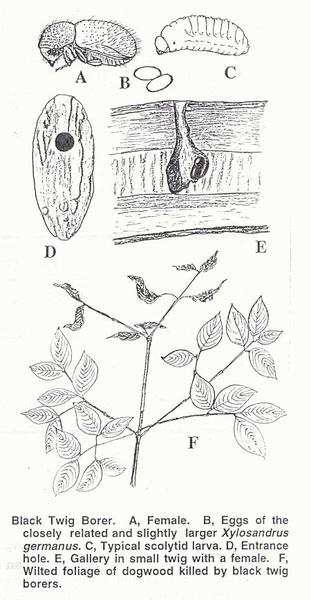 Stages of the black twig borer.

Stages of the black twig borer.

Black twig borers, Xylosandrus compactus, drill into the thin twigs of dogwood, grape, magnolia, live oak, laurel oak and many other plants from shade trees to orchids. Seemingly healthy plants are attacked. Infested twigs or stems will wilt and die back (Figure 1). An infestation is more severe for a young tree. In North Carolina, this pest is more common in the southeastern and coastal counties. 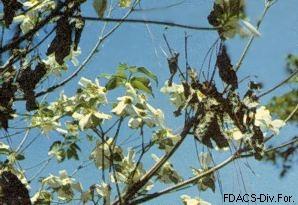 Prune out and destroy infested twigs where practical. Mulching, avoiding overfertilization, irrigating during dry weather and general practices that enhance the health of the plant will make them better able to withstand attacks. Cold winters will also reduce spring populations. When using one of the following pesticides, follow label directions carefully. Do not apply to wet bark. Homeowners have few alternatives for chemical control. A few pyrethroids in homeowner formulations with the target plant on the label may be used with uncertain result.