The black vine weevil, Otiorhynchus sulcatus, is about 3⁄8 inch long and has a short snout. The thorax and wing covers are bumpy. The body is blackish brown; the antennae are black. The egg is smooth and shiny. It is white when first deposited but becomes brown as it ages. The legless, white grub grows to 1⁄2 inch long. Its body is curved with a brown head. The pupa is white with tiny spines on the head, abdomen and legs.

Black vine weevils are difficult to find on soil and media surfaces during the day.

Black vine weevils are difficult to find on soil and media surfaces during the day. 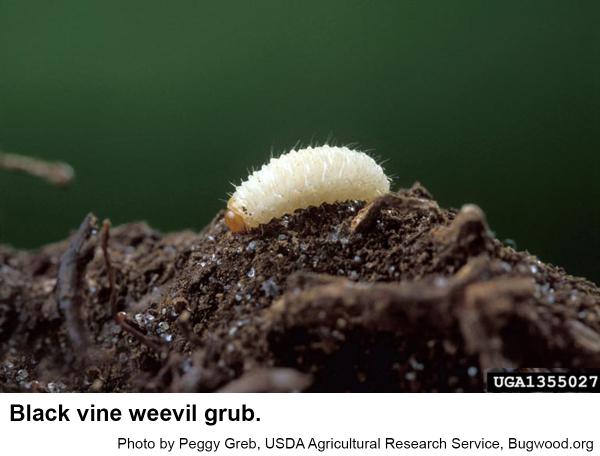 Black vine weevil grubs grow to about half an inch long.

Black vine weevil grubs grow to about half an inch long.

Black vine weevil pupae are spiny and found in soil.

Black vine weevil pupae are spiny and found in soil.

The black vine weevil has the name "vine" in its common name because it was first recognized as a pest of grape vines in Germany in 1934. In 1910, the beetle was found in Connecticut and has since become a serious ornamental pest in southern Canada and the northern United States. It is found in the Mountains and upper Piedmont of North Carolina where black vine weevils feed on azalea, euonymus, hemlock, hosta, rhododendron, and yew as well as many other herbaceous and woody plants.

Black vine weevil larvae stunt or kill plants by feeding on the roots. Larger roots are stripped of their bark or girdled, or they have notches chewed out of them. The adult weevils chew the edges of the leaves, cut off the tips of needles or devour entire needles. Foliage is preferred to terminal growth.

Black vine weevils overwinter as mature larvae. However, a few adults also survive the winter to feed and deposit eggs during a second season. This weevil is parthenogenetic (no males). Although one female was recorded as laying 863 eggs, the average number of eggs deposited by each female is probably about 200. During the preoviposition period, which lasts about four weeks, the adults feed extensively. Adults usually live 90 to 100 days. Eggs, deposited in the soil and leaf litter, hatch in two to three weeks. Initially, the young larvae feed on rootlets; but after the third molt, the larvae move to the larger roots. During their development, the larvae molt five or six times within earthen cells in the soil.

After a quiescent prepupal stage lasting three weeks to 81⁄2 months, the larvae pupate. About three weeks later, adults emerge. Adults feed at night and drop from the plant, feigning death when disturbed. These weevils cannot fly so they must be carried or must crawl to uninfested areas.

Black vine weevil grubs feed on the roots of their host plants.

Black vine weevil grubs feed on the roots of their host plants.

Control of black vine weevils can be directed at adults as they first emerge on favored host plants (rhododendron, hosta, euonymus). Pesticides should be applied thoroughly to kill weevils on the plants and on the media or soil surface where the weevils hide during the day. Examine host plants frequently in late May and early June for fresh feeding damage. Ohio State University Extension recommends timing sprays for mid-June when florabunda roses are in bloom. Timing sprays with bloom periods in North Carolina should be expected to hold. Use three sprays at three week intervals. For labeled pesticides, see the North Carolina Agricultural Chemicals Manual under the headings: Trees and Woody Ornamentals, Plant: Any, Black vine weevil.

Pesticides may be applied to the media or soil surface as a drench to control black vine weevil larvae. Imidacloprid (Merit, Marathon) can be used as a soil injection or drench against larvae. Scimitar & Demand (Oregon study) and Talstar are effective when adults are present. Aloft may also be an effective product. Apparently, carbaryl (Sevin), malathion and isofenphos (Oftanol) are not effective for black vine weevil control. The standard Orthene is felt to be effective, but has shorter residual than the pyrethroids.

The parasitic nematode, Heterorhabditis bacteriophora, is fairly effective in controlling black vine weevil grubs. This nematode is available through biological control dealers on the web.