Boxelder bugs, Boisea (Leptocoris) trivittata, are elliptical and about a half inch long. The boxelder bug is dark gray to black with three red stripes on the thorax. The leathery parts of the wings are outlined in red. The eyes are also red. Females lay eggs that are light yellow but soon darken to rusty red. Nymphs are conspicuously bright red, although older nymphs have dark gray wing pads. The head, legs and antennae are gray. Adult boxelder bugs emerge from their overwintering shelters in March and early April and feed for about 2 weeks before mating. These insects prefer sunny areas and, therefore, are found most abundantly on trees in a southern exposure and on sides of buildings facing south. Eggs are deposited in masses of 10 or 11 eggs usually in bark crevices. Each female deposits about 230 eggs. The eggs hatch in about 2 weeks. Development of the six nymphal stages takes 50 to 70 days. The boxelder bug population increases rapidly from middle July to early September. Two generations are produced each year. The insects seek overwintering places in September and October. Only the adults survive the winter as they have the socially unacceptable habit of dining on any nymphs unfortunate enough to be in the vicinity. Because these insects feed primarily on boxelder and maple seeds, boxelder bugs are found on the ground feeding on fallen seeds. As boxelders produce their seeds, the bugs move up to feed in the tree. 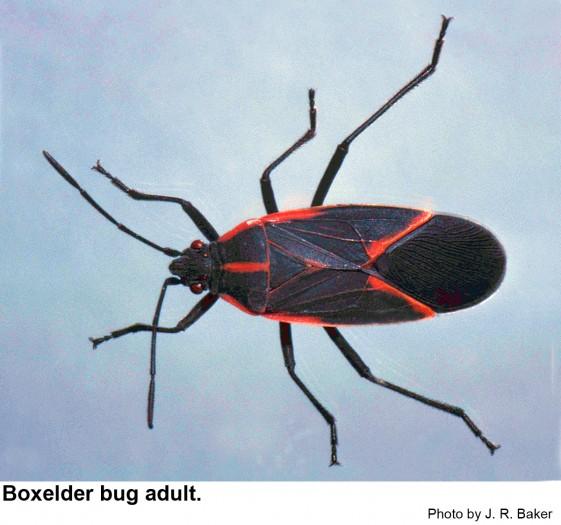 Boxelder bugs are about half an inch long.

Boxelder bugs are about half an inch long. 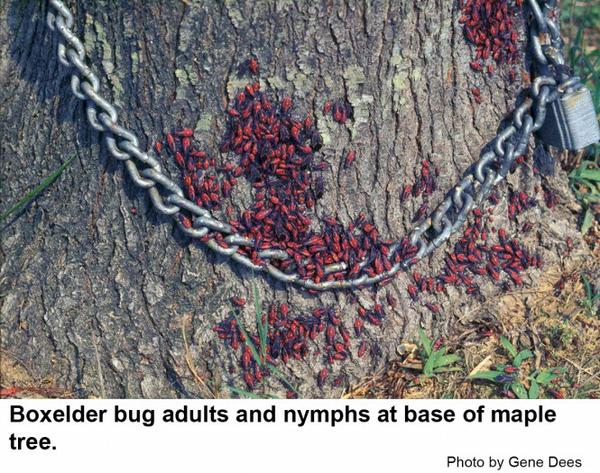 Boxelder bugs often congregate on the south side of objects.

Boxelder bugs often congregate on the south side of objects. 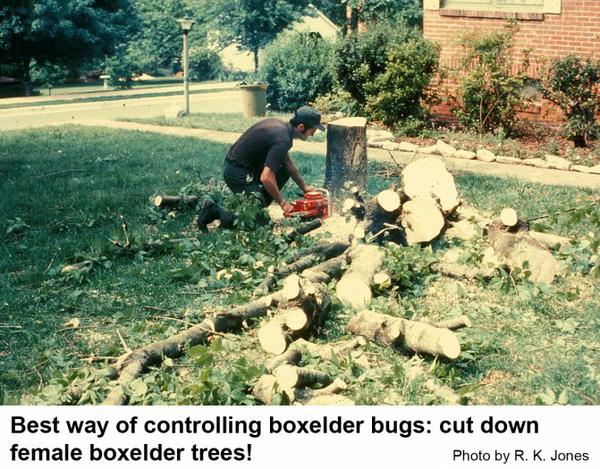 Cutting a boxelder tree may be the best long term control.

Cutting a boxelder tree may be the best long term control.

Boxelder bugs feed on the seeds of boxelder trees and to a lesser extent on the seeds of maples and ash trees. Sometimes these bugs can become quite abundant on maples or ash trees. However, when people are bothered by boxelder bugs year after year it is usually because a female boxelder tree is in the yard or nearby. Although boxelder bugs are associated with shade trees, this insect can become a household pest as well. In fall, boxelder bugs tend to congregate on buildings and enter cracks and crevices to overwinter. They usually do not bite people or harm goods, but their presence is a nuisance. On warm winter days, the insects become active and move about in and on buildings where they cause concern for the occupants.

Sometimes boxelder bugs become such a nuisance that the only solution seems to be to cut down the female boxelder trees in the yard. Boxelder bugs noticed in late spring or summer are much more susceptible to pesticides than later in the fall when they start invading houses. When the weather is cool and they are ready to hibernate, boxelder bugs are much more tolerant of pesticides. If boxelder bugs are vacuumed up, empty the vacuum soon to prevent the bugs from creating a foul odor inside as they die and decay.