Boxwood mites, Eurytetranychus buxi, are mysterious: we often see the damage but rarely see the mites. These mites are about the size of the period in news print. They are gray with pale legs. Boxwood mites are also unusual in that they feed on the upper as well as lower surfaces of the leaves. Most spider mites only feed on the lower surface of leaves. Their feeding causes whitish spots to form on the leaf as they suck out the cell contents. Most spider mites feed here and there but boxwood mites tend to feed in a line so that the injured plant surface has tiny pale lines that resemble minute scratches when examined through a hand lens. We have several generations per year, and although most of the injury seems to occur in spring, damage is often noticed later in the year.

Overwintering eggs are yellowish-ochre and are laid in September and October. In midspring the eggs hatch into six-legged larvae that crawl about and feed freely for about 3 days. After a resting stage (about 1 day), the larvae molt into eight-legged first nymphs. They feed for about 4 days and then go into a resting stage (about 2 days). After that period, the second nymphs emerge to feed for about 4 days. The final resting stage lasts about 4 days, and then the adults emerge. Mating takes place immediately. Within hours a female may start laying eggs, usually 25 to 30. Because the entire life cycle takes from 18 to 21 days, there are at least eight generations per year. 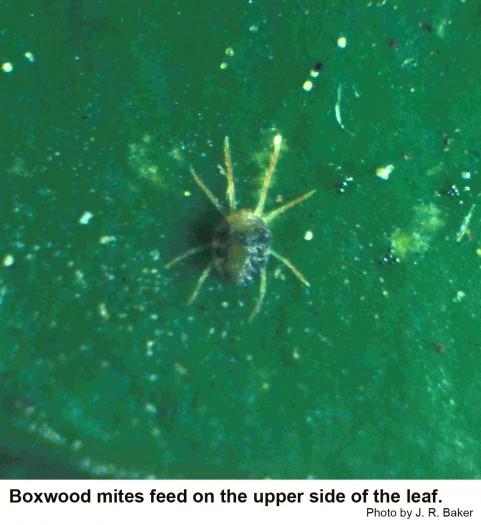 The boxwood mite feeds on top of leaves.

The boxwood mite feeds on top of leaves. 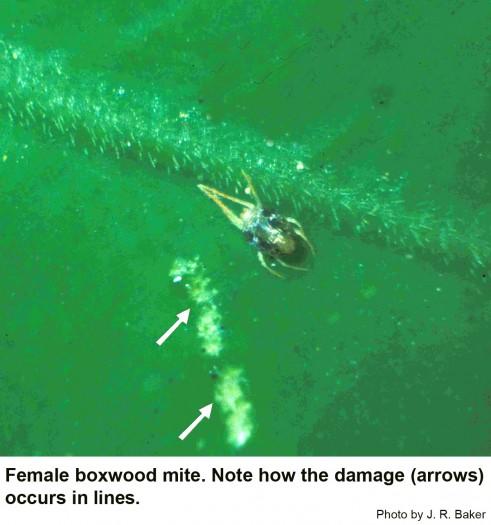 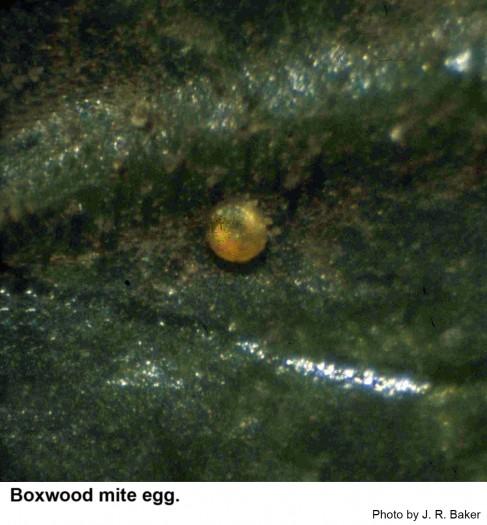 Boxwood eggs are yellowish and flattened.

Boxwood eggs are yellowish and flattened.

Boxwood is the only host of the boxwood mite. Although boxwood mites sometimes cause infested plants to be noticeably off color, they do not usually cause general yellowing (or bronzing) and dieback. All moving stages feed on the upper and lower surfaces of the leaves. As they feed, they apparently inject a toxic saliva, which causes small, yellow, scratchlike spots to form on the upper leaf surfaces. New plant growth seems particularly susceptible to attack. Twospotted spider mites and other spider mites, on the other hand, usually cause tiny chlorotic stipples of discrete dots.

Although most of the injury seems to occur in spring, boxwood mite damage is often noticed later in the year. Two treatments with insecticidal soap, horticultural oil, or another labeled miticide spaced 10 to 14 days apart during the spring when the mites are present is recommended. If the mites are noticed later, it would might be a good idea to treat with a horticultural oil at that time and then again the following spring.