Sphinx moths in the genus Hemaris are remarkable because Hemaris diffinis resembles bumble bees and Hemaris thysbe vaguely resembles hummingbirds in flight. Hemaris diffinis is called the bumblebee moth. It is also called the snowberry clearwing because the caterpillar (a hornworm) feeds on snowberry. This moth has mostly black scales around clear portions of the wings, and the legs are black. The caterpillar is a pale green hornworm with a black horn and black spots along each side. A pair of pale lines runs down the back. These hornworms feed on dogbane, snowberry, honeysuckle, and dwarf bush honeysuckle.

Hemaris thysbe is the hummingbird moth or common clearwing moth. It varies from other Hemaris moths in that the legs are pale and the wings have rusty scales. The Hemaris thysbe caterpillar is a hornworm with a pale horn and numerous pale spots along each side that feeds on cherry, European cranberry bush, hawthorns, honeysuckle, and snowberry. A pair of pale lines runs down the back. The caterpillars spin cocoons inside of which they pupate in leaf litter or in the soil. We have at least two generations per year in North Carolina. 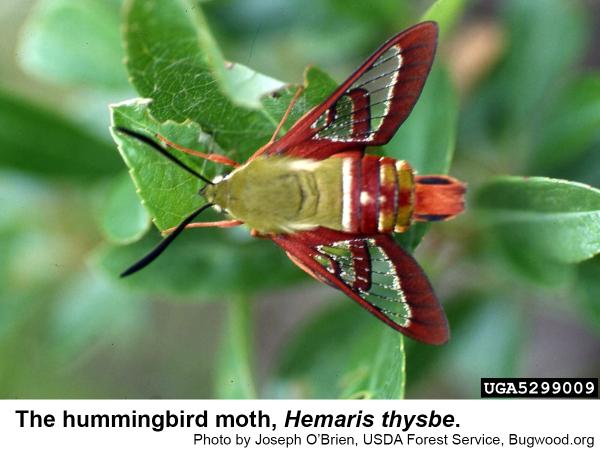 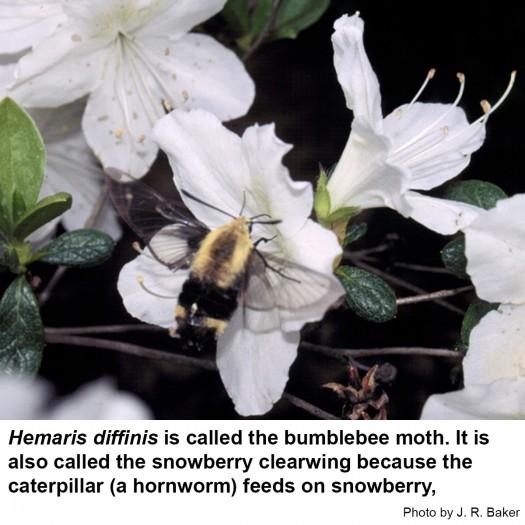 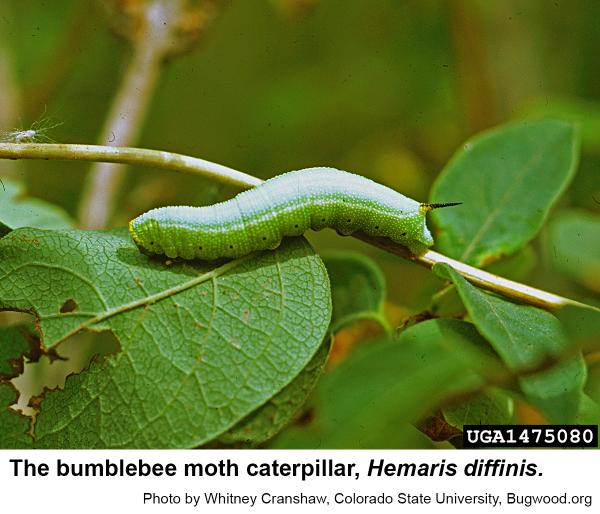 The immature stages of Hemaris moths feed on beauty bush, cherry, cranberry, hawthorn, honeysuckle, snowberry and Viburnum. The caterpillars are almost never submitted for identification. The adults visit just about anything that is in bloom.

Bumble bees, carpenter bees and Hemaris moths often forage at the same flowers. Although they look like stinging insects, the Hemaris moths are completely harmless. Evidently their resemblance to stinging insects affords them some protection from predators. Because the caterpillars are rarely noticed, no control measures are recommended.