Changes in the Phosphorus Fertilizer Recommendations for Corn, Soybean, and Small Grains in North Carolina SoilFacts

Skip to A Brief Historical Perspective

North Carolina soils are naturally acidic and deficient in phosphorus (P). Liming and P fertilization historically led to very positive impacts in crop yields, and these practices were considered critical for soil fertility improvement in North Carolina. Applied research from the early 1940s defined the economic optimum rates of fertilizers to maximize yields for a variety of crops on predominant soils, using soil analysis as the tool to guide fertility recommendations. With collaboration between the North Carolina Department of Agriculture and Consumer Services (NCDA&CS) Agronomic Division and North Carolina State University’s Department of Soil Science, soil test calibration studies were frequently conducted from 1950 to 1980. These studies focused on defining the economic optimum P rate for each soil test P level and crop species.

In the mid-1970s, concerns over differences in fertilizer recommendations between public land-grant university labs in neighboring states fostered the establishment of the Mid-Atlantic Soil Test Work Group, which has met annually for more than 35 years. Knowledge gained in these discussions and North Carolina soil test calibration studies established the soil test P critical level, a value above which the probability of a yield response to P fertilizer was low and therefore not economically viable.

In 1972, soil test calibration research was translated into practical recommendations for growers and the agricultural industry in the Crop Fertilization Based on North Carolina Soil Tests guide, commonly referred to as the “Orange Book” (Hardy et al. 2014). Since the early 1950s, P recommendations had been based on the Mehlich 1 soil test extractant, but the Mehlich 3 soil test extractant was adopted in the mid-1980s. The latter was considered an improvement from Mehlich 1 because it was developed as a multinutrient extractant (P, K, S, and micronutrients). After the 1990s, soil P test calibration studies as referenced herein were rarely conducted because critical levels were already established, and few resources existed to calibrate Mehlich 3 soil test with crop response to P fertilization. 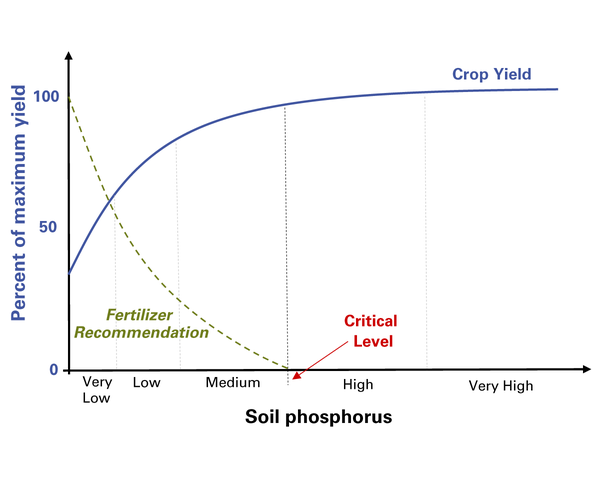 Collectively, Tables 1 and 2 datasets demonstrate that the soil test P critical level is about 25 P-I for coastal plain soils and about 10 P-I for piedmont soils (Figure 2). Since the early 1990s, a single and conservative P critical level of 50 P-I has been used because (1) soil testing was recommended every two to four years, and (2) it was important to provide a two- to three-fold safety factor so that P was never limiting for the many diverse crops produced in North Carolina, including high-value rotational crops such as flue-cured tobacco. In addition, P fertilization recommendations were provided for crops grown on soils with 65 P-I. 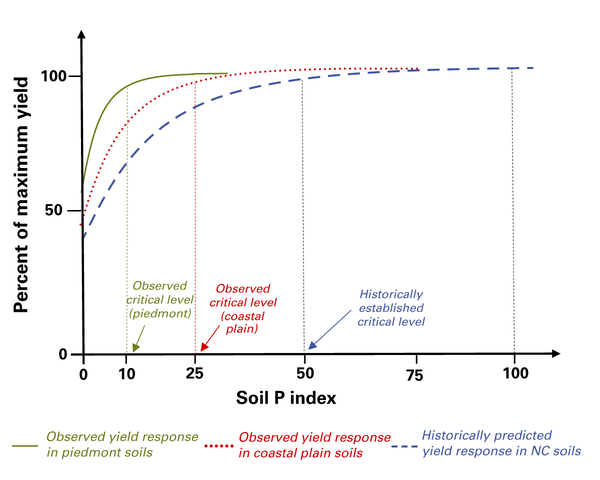 In the 1980s, as documented by NCDA&CS records, concern for P fertilization recommendations based on 50 P-I critical level was raised by NC State soil science faculty given that research data showed coastal plain and piedmont P-I critical levels to be about 25 and 10, respectively. However, no action was taken to update recommendations. Recently, Zhang et al. (2021) demonstrated that among all southern states, North Carolina has the highest P fertilizer rate recommendations in soils with P-I > 15 (Figure 3). Unlike most other southern states, in North Carolina, P fertilization is recommended between P-I 30 and 45, and P recommendations are provided up to P-I 65. 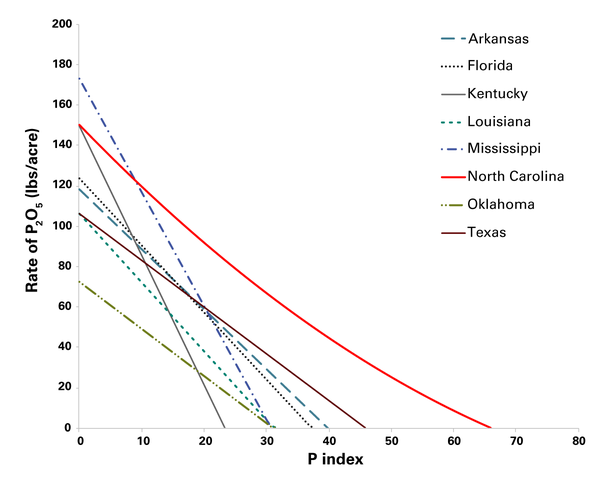 The P management strategy adopted in North Carolina was designed to protect yield and avoid any possibility of P nutrient shortages. However, after decades of generous fertilization, most North Carolina soils routinely exhibit very high P sufficiency levels. From 2017 to 2019, the state’s average P-I was 137 for 712,000 agricultural soil samples analyzed by NCDA&CS, showing that in almost all North Carolina counties, average soil P was higher than the 50 P-I critical level (Kulesza 2020).

Changes in the Phosphorus Recommendations

Skip to Changes in the Phosphorus Recommendations

Data demonstrate that P recommendations for North Carolina crops are higher than those needed for adequate crop yields. The P critical levels used and rates of P fertilizers recommended are beyond those needed, and generally much greater than other southern states. To address this problem, the Interagency Soil Test Phosphorus Committee was created in 2021. This working group includes researchers from NC State (David Crouse, Luke Gatiboni, John Havlin, Stephanie Kulesza, Deanna Osmond, and Alex Woodley) and the NCDA&CS Agronomic Division (David Hardy and Colleen Hudak-Wise).

Using the research data available, the group concluded that the critical levels currently being used are higher than those observed and supported in North Carolina field studies. Consequently, the committee decided on three immediate actions: (1) recommend that no fertilizer P be used in soils with > 50 P-I; (2) initiate field and greenhouse studies to evaluate the soil test P critical levels in the coastal plain and piedmont soils, and decide if further modifications are needed; and (3) develop a mathematical model for the soil testing lab to identify soils from the piedmont region with high P buffer capacity that will allow a special P recommendation for those soils. All three actions were immediately initiated after the committee meeting. 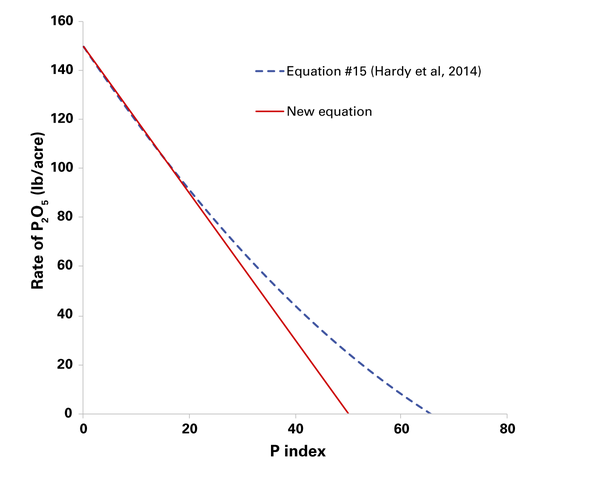