Eastern cicada killers, Sphecius speciosus, occur throughout the United States east of the Rocky Mountains and in Mexico, where they are common in urban and suburban areas. In North Carolina, they generally appear in July and remain active throughout the rest of the summer. Cicada killers are the largest solitary wasps in the state, with females occasionally reaching 1.5 inches long and weighing about a gram (the weight of a shelled almond). Males weigh about half as much.

Adult cicada killers can be recognized by their size, body shape, and distinctive color patterns. Most striking is the black abdomen with three complex, yellow bands. The head and thorax are rust colored to dark brown, and the wings a transparent russet. Only European hornets rival cicada killers in size and bulk, but their color patterns differ, with hornets displaying more yellow on the abdomen.

Cicada killer burrows are also characteristic, particularly when built on flat ground, where a U-shaped mound of soil accumulates around the nest entrance during construction.

Although individual cicada killers have unique markings, they differ from other, similar species in size, body shape, and overall color pattern.

Although individual cicada killers have unique markings, they differ from other, similar species in size, body shape, and overall color pattern. 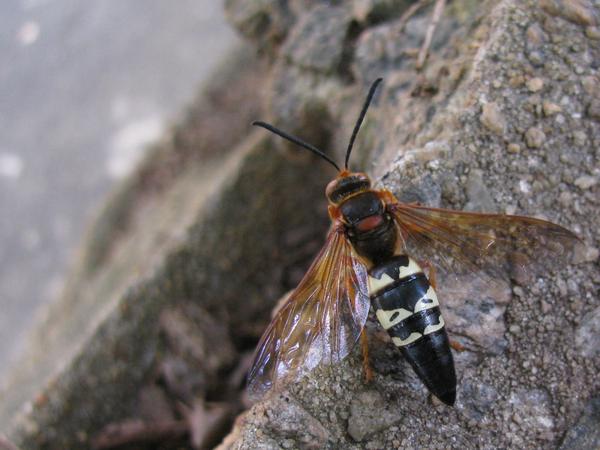 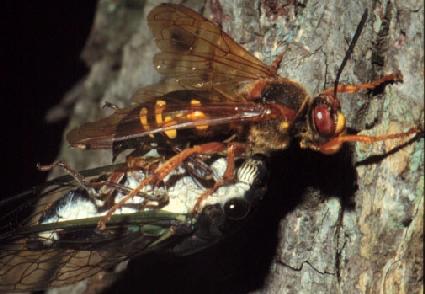 Cicada killers are solitary, meaning that each female typically builds her own nest and hunts prey to feed her own offspring (unlike yellow jackets, hornets, and paper wasps, which live in social colonies). Even so, cicada killers are often found in groups, since many wasps are attracted to the same suitable nesting areas. These are usually sparsely vegetated, southeast-facing slopes or unmortared retaining walls, with plentiful cicadas in nearby deciduous trees.

Male wasps appear a week or two before females, and spend their time feeding at flowers or sap and establishing territories. They perch on vegetation or stones and make brief, hovering flights to inspect newcomers, including people, pets, and other wasps. Although these inspections may be intimidating, male wasps cannot sting.

When females emerge, they mate once and then begin to prepare nest burrows, which can be up to 40 inches deep and include about 16 individual chambers. One female wasp can excavate nearly a half-gallon of soil for a single burrow, and she makes about four burrows in her lifetime. She piles the tailings in a neat, U-shaped mound at the entrance of each burrow, and this soil can damage turf and other plants.

Cicada killers are also beneficial, in that they hunt dog-day cicadas in the genus Tibicen. The cicadas are herbivores of deciduous trees. Adult female cicadas damage tree branches by laying eggs in them, while cicada nymphs develop underground while consuming sap from tree roots.

In her lifetime, one female cicada killer can gather 100 or more cicadas--each of which weighs about twice as much as she does. She paralyzes the cicada with her stinger and hauls it back to her nest. She brings one cicada for each of her male offspring, and two or three for each female. (The wasp knows in advance the sex of the next egg she will lay). Then she lays a cigar-shaped egg, about 1/8 inch long, at the base of the cicada’s middle leg and seals up the nest chamber that contains it.

The eggs hatch in a day or two and the long-necked larvae develop quickly, each one consuming a whole cicada in less than four days. Upon completing its meal, the larva spins a silken cocoon and enters diapause, remaining in a suspended state until the following May or June, when it pupates. One may occasionally unearth a cicada killer cocoon; it is brown, about 1.25 inches long, and ringed with a band of pores around its equator. 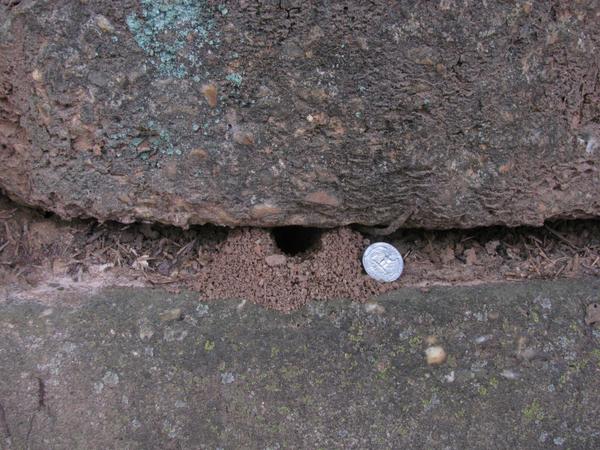 Entrance to a cicada killer burrow between stones in a retaining wall.

Entrance to a cicada killer burrow between stones in a retaining wall. 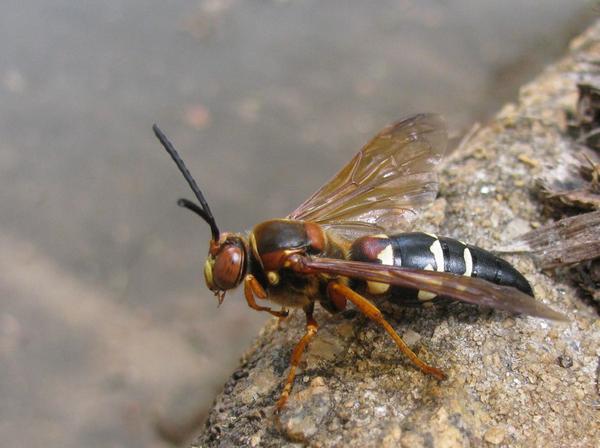 Male cicada killers perch on stones or vegetation to monitor their territories.

Male cicada killers perch on stones or vegetation to monitor their territories.

Control of cicada killers is rarely necessary. Males are unable to sting, and females are unlikely to do so. Nest construction can damage turf and small plants, but aesthetic or economic thresholds have not been established.

One study in West Virginia eliminated cicada killer activity on a golf course by spraying the appropriate insecticide directly into active burrows, or immediately around their entrances. Broader area sprays were less successful.

One wasp biologist has informally demonstrated a laborious but effective control method that involves plugging burrows and using a badminton racket to swat the wasps.

However, because the developing larvae may survive treatments, and because good nesting habitat remains appealing to new females year after year, wasp removal will likely be an annual undertaking unless turf or vegetation are also managed.

Recommendations for insecticides approved for control of bees and wasps can be found in the North Carolina Agricultural Chemicals Manual.

Skip to Sources and Further Reading