Rusts are fungal diseases that can be found throughout corn growing regions of the United States and southern Canada. Two kinds of rust can affect corn in North America the common rust and the southern rust. While unsightly, the common rust it is much less destructive than southern rust, and must reach a very high level of disease on leaf tissue to have a substantial impact on plant photosynthesis. If levels are high enough, however, yield losses will be noticeable as kernels are filled with carbohydrates from the stalk, weakening it, and open it up to potential rot. On the other hand, the southern corn rust, primarily found in the southern U.S., may be found during particularly hot and humid years in northern states. Southern rust of corn is much more destructive than common rust. If not recognized early, high levels of disease can occur rapidly and lead to drastic yield losses, as leaf photosynthetic capacity will be severely diminished.

Common rust begins with lesions on leaves resembling flecks which develop into small tan spots. These lesions will be found on both the upper and lower surfaces of the leaves or leaf sheaths and are scattered across the leaf surface. The lesions are circular to elongate and may occur in clusters. The fungus erupts through the epidermis of the leaf surface as lesions mature and grow in length. At this point a distinguishing yellow halo is commonly present. Within the lesions jagged and elongated brick-red to cinnamon-brown pustules. These pustules are the urediniospores which impart the characteristic lesion color and will readily rub off onto fingers. As the disease progresses, lesions become dark orange-brown as teliospores are formed.

The early symptoms of Southern corn rust include small circular-to-oval shaped lesions which are oftentimes accompanied by a light green to yellow halo. Similarly to common rust, as lesions mature they erupt through the epidermis of the leaf surface, but are almost exclusively located on the upper leaf surface. Within the lesions light orange to cinnamon-red pustules, which are key to identification, are filled with urediniospores early in the season. Southern rust pustules tend to be smaller, have a more circular shape, and are more densely packed than common rust pustules. Also, unlike common rust the lesions can develop on tissues other than the leaves, including the stalk, husk, and leaf sheath. 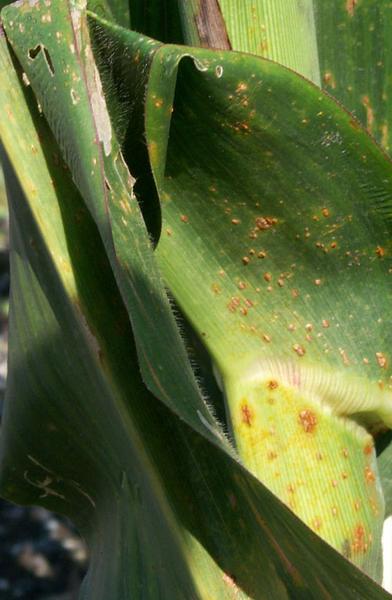 Southern rust on leaves and sheath.

Southern rust on leaves and sheath.

Urediniospores are the primary infective propagule in the U.S. and are spread via the wind. New infection can occur within 7 to 14 days. New infections continue to occur as conditions are favorable, which can lead to an epidemic rapidly. As the growing season progresses, dark brown to black teliospores develop within the lesions. At times during the season both urediniospores and the teliospores can be present within lesions, eventually leading to only the darker teliospores.

Skip to Environmental Conditions for Disease

To manage common rust during the growing season, it is advised to regularly scout corn to detect it early. By keeping a close eye on the progression of the disease, crop growth stage, and the weather, management decisions on the necessity of a fungicide application can be made. The most cost-effective method for controlling common rust is using disease resistant hybrids (where available). If common rust is severe, a foliar application of an approved fungicide is recommended to prevent yield loss. In regions where common rust does not overwinter there is no benefit to cultivation or crop rotation to prevent its recurrence.

This factsheet was prepared by the NCSU Field Crops and Tobacco Pathology Lab in 2018.