The ovisac contains reddish oval eggs. The 3⁄8 inch ovisac is fluted with 14 to 16 ridges. Its ovisac is pure white and is actually a doughy wax on the outside and fluffy or cottony wax inside. Tiny first nymphs are red with dark legs and antennae. Second nymph are usually covered with wax and tiny hairs. Third nymphs are usually covered with wax and fine hairs. They are about 1⁄8 inch long. 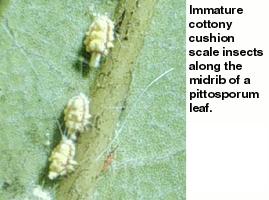 Figure 1. Immature cottony cushion scale insects along the midrib of a pittosporum leaf.

Figure 1. Immature cottony cushion scale insects along the midrib of a pittosporum leaf. 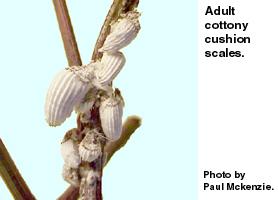 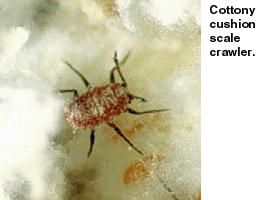 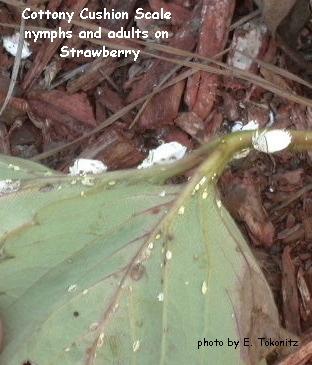 The cottony cushion scale is found throughout tropical and subtropical areas. In the United States, this pest is found in southern California, Arizona, the Gulf Coast states and North Carolina at least as far north and west as Raleigh. Winter temperatures of -12°C (about 10°F) are said to limit the spread of cottony cushion scales outdoors, although it can survive in greenhouses in much colder climates.

Each female lays a large number of eggs in a dense, fluted ovisac from which this insect gets its name. This ovisac is made of wax secreted from the lower side of the scale. Three weeks (summer) to 8 weeks (winter) after being laid, the eggs hatch to first nymphs. In most scales, this stage is called the crawler but most stages of the cottony cushion scale can crawl. The first nymphs can crawl up to 1 yard in 10 minutes, and they tend to crawl up to the leaves and twigs to feed. After 2 or 3 weeks (much longer in winter), they molt into second nymphs which also soon secrete a layer of wax. After 2 or 3 weeks, the second nymphs molt to become third nymphs. In many cottony cushion scale infestations, males are rare or nonexistent.

Female third nymphs crawl from the leaves and small twigs down to the larger branches and trunk. After feeding from 3 to 7 weeks (longer in winter), these nymphs molt to adults. Adult females probably do not feed after they begin to lay eggs. They can produce normal ovisacs and lay eggs away from the host plant. Females can mate as soon as they molt from the third nymph. Unmated females often wait 11 to 17 days before laying eggs. It takes about two weeks for a female to lay her eggs. Females may live 2 to 3 months, particularly in winter. Outdoors, cold weather slows development in all stages drastically. There are probably 2 to 2.5 generations per year in North Carolina. 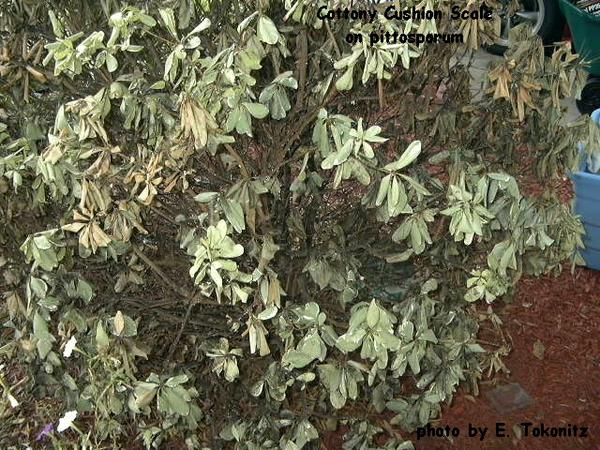 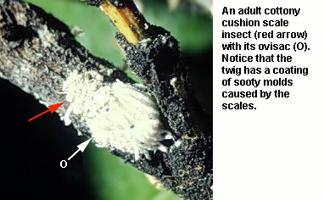 Figure 6. An adult cottony cushion scale insect (red arrow) with its ovisac (O). Notice that the twig has a coating of sooty molds caused by the scales.

Figure 6. An adult cottony cushion scale insect (red arrow) with its ovisac (O). Notice that the twig has a coating of sooty molds caused by the scales. 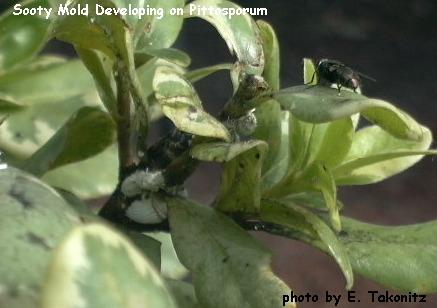 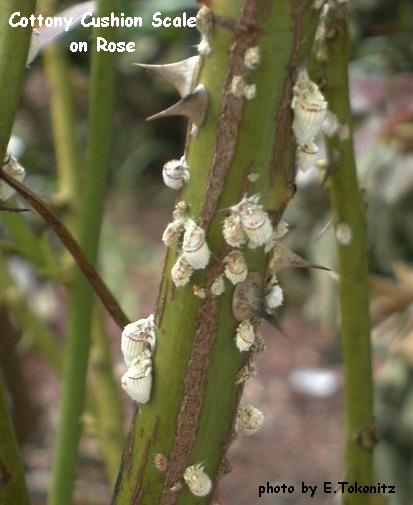 Perhaps because the cottony cushion scale is an introduced pest, it has few predators and parasites. The vedalia, a small, reddish-orange, spotted lady beetle, is highly effective in controlling cottony cushion scale, but vedalias are more susceptible to pesticides than are scales. Vedalias also are active only at warm temperatures so that the scales can outstrip the vedalias in spring and fall. A parasitic fly, Cryptochaetum iceryae (Williston), has been introduced from Australia, but its importance in North Carolina is unknown.

Perhaps only Safari is specifically labeled for cottony cushion scale control; however, several insecticides are labeled for control of scales or scale crawlers. The following are suitable for use on ornamental plants. Be sure to read the label of each pesticide and follow the directions for safe use given on it. Products containing imidacloprid and dinotefuran have given disappointing results. Imidacloprid has also been indicated as having negative long term effects on lady beetles.

The use of a spreader-sticker is recommended for cottony cushion scale control to aid in the penetration of the pesticide into the ovisac and through the wax covering the scales.