Cream leaf blight was discovered in tall fescue swards in Georgia by university researchers who isolated Limonomyces roseipellis from tall fescue exhibiting white lesions that expand toward the base of the leaf. This fungus is the same as the pink patch fungus, but this particular biotype does not produce clamp connections. In tall fescue landscapes, cream leaf blight is a rare occurrence, yet the fungus affects ultradwarf bermudagrasses planted on golf course putting greens too. Little is known about the disease on bermudagrass putting greens, but we commonly observe it in the transition zone and even into northern Florida. However, the disease is most prevalent in areas where bermudagrass goes dormant. The disease rose to prominence in the Southeast as the conversion from creeping bentgrass putting greens to ultradwarf bermudagrass increased. We suspect that the disease has been present for some time and likely was diagnosed as superficial fairy ring, pink patch or some other basidiomycete fungus. As golf course superintendents were working out winter management practices, cream leaf blight was alarming as it could span large areas of putting greens quickly, yet the disease never seemed to cause any serious damage.

On bermudagrass putting greens, the symptoms start as small white or cream spots or patches ranging in size from 3 to 8 inches (7.6-20.3 cm) in diameter. The patches rarely increase in size, but may coalesce into larger areas. The disease is cosmetic, as we have observed little lasting damage associated with the disease, yet it can affect large areas of turf. The stand symptoms can be difficult to see when bermudagrass is painted or pigmented during the winter months. Symptoms have been observed across entire putting greens during the winter months.

Affected leaves have a cream to whitish appearance, but no visible lesions can be found on the leaves. No symptoms or signs are observed on stolons, rhizomes or roots. Unlike with pink patch and some other fungal diseases, no aerial mycelium has been observed with this disease.

The fungus is able to grow at a wide range of temperatures. Growth of the fungus has been observed from 40oF to 90oF (4oC-32oC), but optimal growth in culture is between 68oF and 77oF (8oC-20oC). That being said, it seems that the biotype observed on ultradwarf bermudagrass grows best at the lower temperature range. In particular, cream leaf blight is most severe during the winter months on bermudagrass after covering. This fits with the description of the fungus as it typically is most severe when turf is slow growing because it is a slow-growing fungus. Although the disease is most prevalent during the winter, we have observed the disease in summer during extended periods of rain and cloud cover.

Management of cream leaf blight has been relatively simple. Fungicides work well, and a few have been exceptional in our experience. Cream leaf blight did not develop in any of our fungicide trials until 2016, so before then we relied on feedback from superintendents on what was working. A number of people have reported that iprodione worked well curatively. Curative applications refer to applications made after significant stand symptoms are present. Many superintendents report that Prostar (flutalonil, Bayer) was also excellent. One superintendent reported spraying a combination of iprodione and Prostar, which rapidly knocked out the disease. If curative applications are warranted, do not water in the products, as the fungus harbors itself in the foliage.

Little is known about the cultural management of cream leaf blight. We suspect that we will not learn much more about the biology of this fungus until it becomes a bigger issue. Given that the disease is most prevalent during the winter, especially on slow-growing or dormant turf, fungicides maybe the best option for managing it. Currently, we suggest that superintendents make fall applications of fungicides used to manage spring dead spot and take-all root rot, as these diseases can be destructive. Based on those applications, other fungicides maybe warranted as bermudagrass greens are covered during periods of extreme cold. Typically, we suggest applying chlorothalonil, iprodione or mancozeb before covering greens to ensure that fungi do not proliferate under the covers.

Cream leaf blight is an interesting disease of both bermudagrass putting greens and tall fescue landscapes. It is a relatively minor disease of putting greens, but it can span large areas quickly. The disease remains a cosmetic issue, but many times relatively minor diseases can become more problematic as environmental conditions or management practices change over time. Superintendents who suspect cream leaf blight on their golf course should submit a sample to a local diagnostic lab. After proper diagnosis, management of this disease is straightforward. Please get a diagnosis, however, as white patches on bermudagrass putting greens are symptomatic of many different diseases. Symptoms of cream leaf spot could potentially be confused with take-all root rot or initial symptoms of spring dead spot or root-knot nematode. 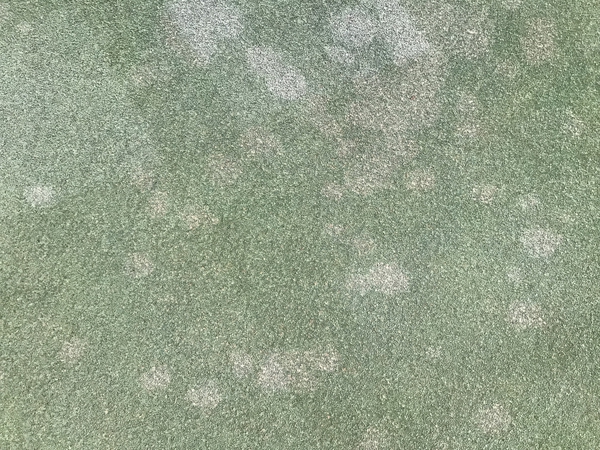 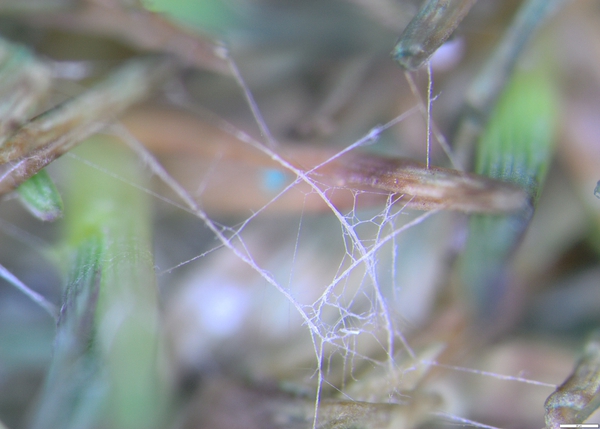 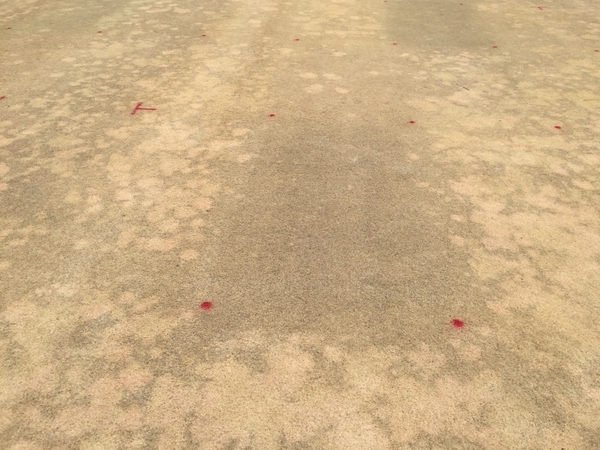 Suppression of cream leaf blight during the winter from fungicides targeting spring dead spot applied in the fall.

Suppression of cream leaf blight during the winter from fungicides targeting spring dead spot applied in the fall. 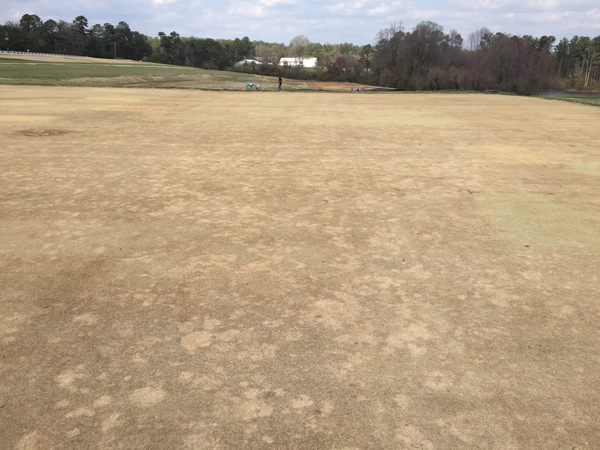