The gall wasp, Andricus quercuslanigera, causes a woolly gall on the midrib of the leaves of live oak. Oaks in general have a flourishing fauna of gall wasps associated with them. The abnormal growths developing in oak tissue are due to the powerful enzymes given off by the immature gall-forming insect as it grows. The plant tissue is remarkably altered even to the point of replication of chromosomes without cell division. Many gall wasps develop for 2 or 3 years in woody galls on the twigs of oaks. Adults then emerge from the twig galls during the winter. They lay eggs in the buds and die. When new growth resumes on the oak, these eggs hatch. Salivary secretions of the gall wasp grub act as powerful plant growth regulators and force the tree to form a gall. Gall wasp galls typically have an outer wall, a spongy fiber layer and a hard, seedlike structure inside of which the gall wasp grub develops. Although gall wasp grubs have chewing mouthparts, they do not seem to chew plant tissue. Evidently the gall secretes nutrients the grubs lap up. An amazing thing about the gall wasps is that they often have a showy leaf gall, but the next generation has an obscure stem gall or catkin gall. This is called alternation of generations. Apparently most if not all cynipid wasps display this phenomenon in which the galls of the children resemble the galls of the grandparents but not those of the parents. The stem gall of the detachable woolly leaf gall wasp is not known. 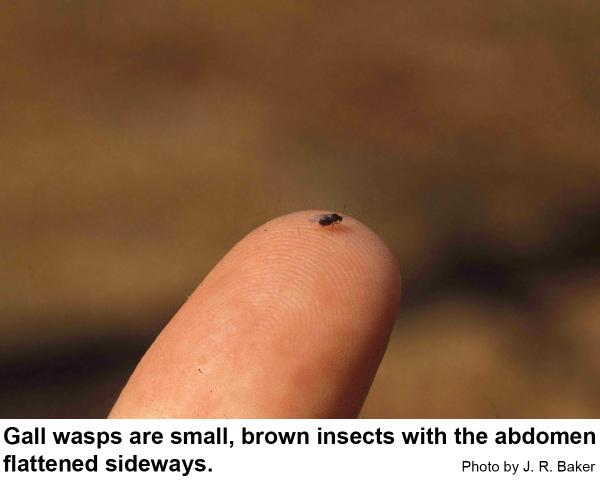 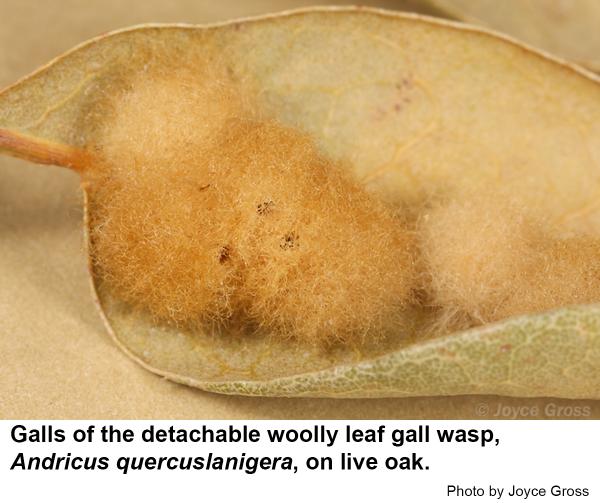 Live oak is the only known host plant of the detachable woolly leaf gall wasp. Oaks in general have a flourishing fauna of gall wasps associated with them. For the most part, leaf galls on oak are harmless except for the anxiety they cause the homeowner.

Gall wasps are difficult to treat because the tissue around the grubs is so distorted that even systemic pesticides have a hard time getting in to kill the grub. Even when the trees are treated, the galls will not disappear, so it is hard to tell if a treatment worked or not. To try to break the cycle of stem galls and leaf galls in next year's growth, collect some of the galls and store them in plastic bags outside, in the shade. When the tiny, dark wasps emerge, it is time to spray. If no wasps have emerged after a few weeks, then collect another sample and store it in the shade outside and wait for the wasps. Some oak gall wasps emerge from stem galls in winter. Other gall wasps that form galls on leaves and succulent stems emerge in late spring or early summer. When the gall wasps emerge, spray the tree thoroughly. Sevin (carbaryl) pesticide is labeled for gall wasp control on shade trees and park trees.