Earthworms are a large, complex group of soil-dwelling worms in the phylum Annelida that is comprised of native and non-native species. Most earthworms in turf are in the family Lumbricidae, the most common of which is the nightcrawler Lumbricus terrestris.

Earthworms are several inches long and can vary in color from brownish-red to gray. They can vary both in length and width but generally have highly segmented bodies and a smooth, enlarged band about two inches from the anterior (front) end (Figure 1). 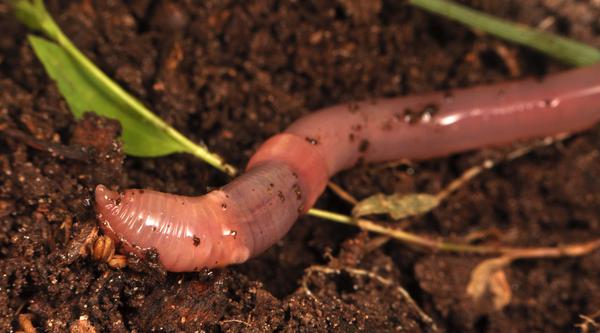 Earthworms are considered beneficial in soil for aeration, water penetration, thatch control and the addition of bacteria and organic matter. However, earthworms can be undesirable when they infest a managed turf area in large numbers and create mounds that are unsightly and can interfere with ball play. Earthworm mating usually occurs during the spring and summer so the majority of complaints regarding earthworm castings are received in late summer or early fall in North Carolina. 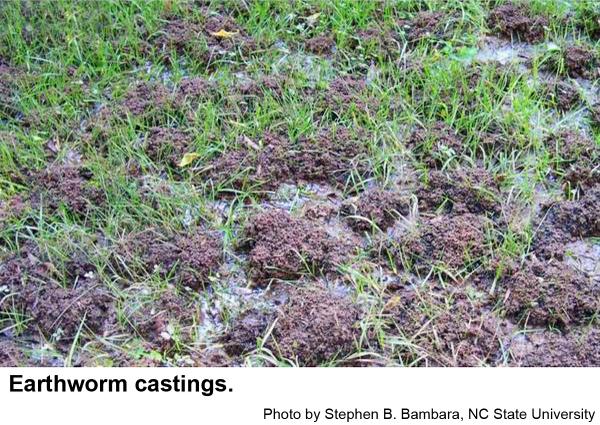 Earthworms have both male and female reproductive organs so any two adult earthworms can mate, which takes place on or just below the soil surface at night. Mated earthworms deposit fertilized eggs in cocoons in the soil. Each cocoon contains approximately four eggs that hatch in two to three weeks.

In addition to castings / mounds disrupting the turf surface, they can also accumulate on or disrupt the path of maintenance equipment, interfering with turf input applications and mowing. Earthworms are also a major food source for moles and cluster flies and can attract these pests into an area. Extremely high populations of earthworms may also disrupt the turfgrass root system.

Earthworms generally prefer less-acidic (pH<6.0), less well-drained soils so increasing the pH and regulating soil moisture can reduce the incidence of earthworm infestations. Excess organic material, such as grass clippings, should be collected and removed from the turf surface. Sand topdressing is a method employed by some turf managers to manage earthworm castings but with varying results. An organic fertilizer product (Ocean Organics’ Early Bird Fertilizer) created from crushed tea seed pellets contains saponins that may disrupt the mucous surface of earthworms.

There are no chemical pesticides for homeowners registered for treatment against earthworms. Of the turf pesticides labeled for other insect pests, and are still commonly used, carbaryl (Sevin) and imidacloprid (Merit) are toxic to earthworms.