Earwigs in the Landscape PDIC Factsheets

Earwigs (order Dermaptera) are red-brown to black, elongate, flattened insects recognized by their forcep-like appendages (cerci) on the end of the abdomen. These insects have chewing mouthparts and long, slender antennae. If wings are present, the first pair is tough and very short, barely covering the first segments of the insect's abdomen and the hind wings. The hind wings unfold quickly for flight and fold back up quickly. The European earwig and the ringlegged earwig are the two most common species of earwigs found in North Carolina. Adults are just over 1/2 inch long. Young earwigs resemble adults but are white to olive-green and lack wings. During the spring or autumn, the female earwig lays 20 to 50 smooth, oval, white or cream-colored eggs in a chamber in the upper 2 to 3 inches of soil. Female earwigs care for the eggs and first stage nymphs. The nymphs leave the nest and spend one season maturing. Both eggs and adults overwinter in the soil below the frostline. Earwigs require moist, cool conditions in mulch, compost piles, trash, under boards and in wood piles. During dry, hot weather, earwigs sometimes migrate indoors. They are active primarily at night and are often found around lights. They feed on mosses, lichens, algae, fungi, insects, spiders and mites, both dead and alive. Some earwigs are predators, feeding on aphids, whereas others feed on living plants and may become pests in greenhouses and on vegetable, fruit, ornamental, forage and field crops. 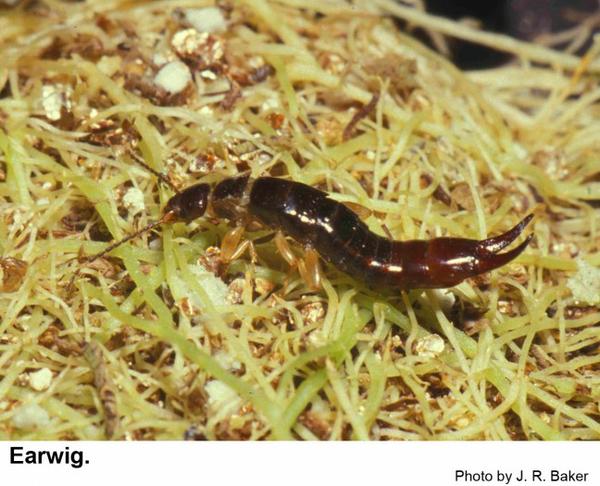 Earwigs appear to have pincers on the rear.

Earwigs appear to have pincers on the rear. 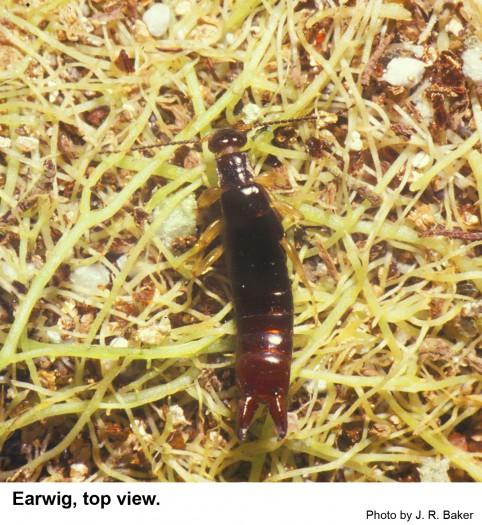 The European earwig is reported to consume small insects, especially aphids, as well as vegetable matter, algae, and fungi. Earwigs may become pests in greenhouses and on vegetable, fruit, ornamental, forage and field crops. Some people object to the appearance of earwigs (especially the "pincers" at the rear), and others find their odor objectionable (quinones released as a defensive chemical).

If practical, modify infested areas to make them less attractive to earwigs. Earwigs are not resistant to pesticides and several aerosols, sprays, and baits are on the market labeled for earwig control.