Educational Needs: A Survey of the Urban Wood Drying Community

Markets for urban wood custom furnishings and live edge furniture have experienced rapid growth across the United States. Natural, and sometimes rustic furnishings, have become an essential part of modern interiors. Urban wood furnishings are not a commodity—they are custom, unique furnishings that are created to tell a story. Even the origin of a single log is a value-added feature of urban wood products. The increasing demand for urban wood products is being met by small businesses in both rural and urban areas. In addition to existing streets, urban parks, and recreational areas, increasing urbanization has added to a growing number of wood resources that are now available for processing.

The urban wood movement promotes the diversion of wood from waste streams and the conversion of unused potential of large quantities of raw materials into value-added products that have economic and societal effects. The movement dates back to the early 2000s when the emerald ash borer (Agrilus planipennis) infested large numbers of urban trees (Kampelmann 2020). The larvae infest the inner bark of a tree, which disrupts the transport of nutrients and water, but leaves the wood unharmed. However, limiting the spread of the infestation required removing a great number of trees. Today, the beetle is found in 35 states, as well as Ontario, Quebec, New Brunswick, Nova Scotia, and Manitoba (see Emerald Ash Borer Information Network).

The US Forest Service has played an important role in creating networks that promote the use of urban wood at the regional level. One entity, “Bringing Urban Forestry Full Circle: Localized Approaches for Capturing Value and Enhancing Public Benefits of Urban Forests,” provided funding for networks in Illinois, Michigan, Missouri, and Wisconsin (Urban Wood Network 2021). Additional funding from private and public entities helped to establish the Urban Wood Network to promote the use of urban wood across the US.

Processing urban wood into lumber requires the same steps used in large volume lumber processing. However, the processing of urban trees takes place on a much smaller scale and requires greater flexibility to utilize a much more heterogeneous resource. Some businesses operate with smaller budgets and financial constraints, which translates into limited space, equipment, tools, and labor.

Plantation trees, which are grown and managed to fall within specific margins of highly automated industrial processes, are primarily softwoods. Urban trees, which are typically the more desirable hardwoods, have natural variability. Numerous environmental factors, such as light, rainfall, competition, pollution, and pruning can affect the growth of trees. The variability of growth factors creates a diverse wood resource.

One of the major steps of processing wood into mid and high-value products is drying.

Education for operators to deliberately expose green wood to regimes of temperature, humidity, and air through dry kiln has a long history among Extension and outreach entities in the US. The courses were initially designed for participants in industrial settings with large quantities of more homogenous wood resources. The drying of urban wood is similar, although a curriculum for urban wood drying must be tailored to a more diverse resource, smaller-scale equipment, and other potential limitations such as space, time, and finances.

Approximately one-third of respondents (19/56) were located in California. All other respondents were spread across 22 states in the US and Ontario, Canada. Two responses were received from Ticino, Switzerland. Based on their addresses, 25 businesses were located in cities, 13 in towns, and 18 in rural environments. Galvin, Grove, Hines, and Marshall (2000) found that the urban wood sector connects rural and urban regions and creates widespread economic activity.

A total of 34 respondents indicated that their businesses were in operation for 10 years or less. The oldest business was 60 years old. With all responses combined, the average age of the businesses was 13 years.

The majority of respondents (30) considered themselves to be at a practical application stage of experience. Three had never dried a piece of wood, while ten said they had advanced experience.

Respondents were asked to provide their most frequently used sources of information. Responses were sorted into the categories, as shown in Figure 1. The Internet was the most frequently used source of information for 24 participants, followed by publications. “Internet” is a very general term that includes diverse web applications and tools. Some respondents included other details about their Internet usage, while some did not. More specific Internet sources that were cited were YouTube (7), forums (4), and Facebook (1). Personal networks, such as other businesses, were identified as a source of information by six respondents. The Extension Service (4), the US Forest Service (3), and workshops (2) were also mentioned. Books were listed only once. Many participants offered a combination of different sources of information. Network, publications, workshops, and local Cooperative Extension centers were frequently cited in combination with the Internet.

In response to questions about who taught the participants about drying, most respondents said they were “self-taught” or learned from another information resource. Only two identified family and employer as a resource.

Available space is critical for any urban lumber operation. Incoming logs can be managed in a sorting yard where you will be able to distinguish different species and grades, and maintain threshold inventory. Space may also be required for air drying. In the survey, 45 respondents indicated that they include an air drying step in their drying process. This is not surprising since air drying is known to be an effective method to remove large quantities of moisture at a low cost (Forest Products Laboratory 1999).

Stickered packages of wood, with sticks between stacks to allow better air flow, are exposed to the environment so that moisture is removed by natural air circulation. Air drying is used to decrease the moisture content of green wood to as low as 20%. Since air drying significantly slows down below fiber saturation (30% moisture content), it is best to stop air drying at a moisture content of 28%. Air drying sheds, with open walls and fans to control the airflow, can help to protect the wood from the weather. The location of the operation does not appear to affect the decision to air dry. Of the 45 survey respondents who used air drying, 20 were located in a city, 10 in a town, and 15 in rural areas.

The processing of urban lumber takes place on a small scale, compared to the large manufacturers that use multiple high capacity, steam-heated kilns. As shown in Table 1, dehumidification kilns are among the most popular solutions for small-scale operations. In the survey, 57% (32) reported using dehumidification kilns, which are especially useful for drying small quantities of custom kiln-dried lumber (Bergman 2008). Moisture is removed by a dehumidifier, which works by cooling the air, and then condensing and removing moisture to reduce humidity.

The use of vacuums to remove moisture from wood has been known since the early 1900s (Espinoza and Bond 2016). Below atmospheric pressure, moisture can be removed more efficiently at a given temperature. Vacuum kilns lower the pressure in a sealed chamber. The chances of drying defects are reduced because the wood remains more stable at low temperatures (Oltean, Teischinger, and Hansmann 2007).

Vacuum kilns are differentiated by their method of heat transfer. The four types are conductive heating, cyclic vacuum, superheated steam, and dielectric vacuum. Today, vacuum drying has become very popular among small-scale processors. There are semi-automated systems available that are easy to install, convenient to operate, space efficient, and relatively quiet for use in urban areas. Nine respondents indicated that they were using a vacuum kiln.

Only one respondent reported using a steam-heated kiln.

A total of 30 (41%) respondents stack their wood by hand. A third of respondents (18) use a forklift to load the kiln, while nine respondents indicated that their kiln was loaded with a track.

The wood species that are dried by the survey participants east and west of the Mississippi are shown in Figure 2 and Figure 3. Species in the eastern half of the US are dominated by hardwoods. More than 50% of respondents east of the Mississippi indicated that they were drying red oak, ash, cherry, and walnut. Slightly less than half listed pine, soft maple, and white oak. Hard maple and pecan were just below 20%, followed by elm and sycamore at 15%. One respondent from the eastern US selected chestnut and one selected redwood.

Businesses west of the Mississippi appeared to dry a larger variety of wood species, although this group was slightly overrepresented among participants at 32 of 53 respondents. Softwoods appeared to play a greater role in the western part of the US with seven species compared to two in the eastern part of the country. 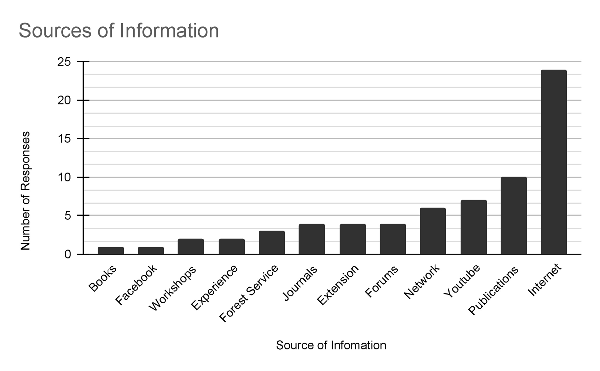 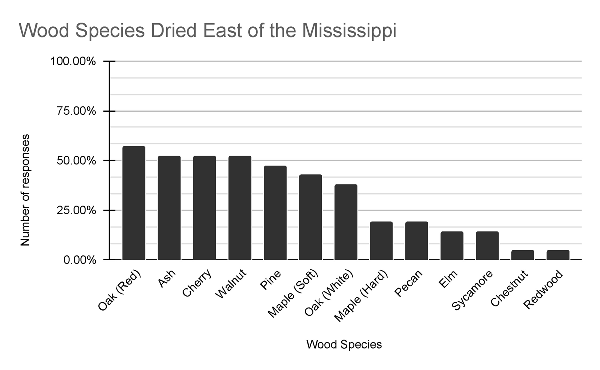 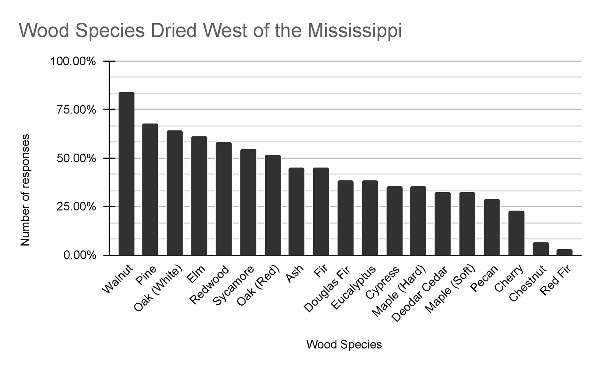 Despite the relatively localized distribution of the survey on the West Coast and in North Carolina, responses to the survey were received from a relatively diverse group of locations across the US, as well as from Switzerland. Most participants listed the Internet as their most-used source of information, and appeared to be well connected and informed. The Internet allowed participants to exchange information and provided access to more traditional resources, such as publications from the US Forest Service and the Cooperative Extension.

Best practices for drying wood have been developed and published over the last century. Some resources, which are often 50 to 60 years old, still contain accurate and helpful information, although they are not easily accessed by everyone. Educational organizations such as Wood Products Extension can take a leading role in integrating those resources into the current drying curricula.

Over time, many drying technologies have been developed, although some are not suitable for small operations. Drying curricula for urban wood should focus on the most frequently used drying technologies, dehumidification and vacuum kilns, which the survey showed are the most frequently used technologies among urban wood processors. Lectures could introduce procedures for building dehumidification kilns with standard building materials, which have been published online (Bennett 2019).

Urban wood includes a large variety of different species. Based on drying history, wood can be classified into four different groups by species and thickness (nyle Dry Kilns 2021). Some species allow higher drying rates without surface checking, while others are prone to stain if not dried more quickly. A drying curriculum must provide attendees with the correct resources to determine appropriate drying rates and highlight the challenges of mixing different species in a single batch.

Overall, the survey provided interesting insights into the urban wood community. The responses will help to create a comprehensive drying curriculum that is relevant to the respondents’ operations.

Funding for this project was provided by the California Department of Forestry and Fire Protection as part of the California Climate Investments Program, in partnership with Deadwood Revival Design. The Urban Wood Network Western Region, as well as the North Carolina Urban Wood Group, greatly assisted in the distribution of the nationwide survey. The author would like to thank all stakeholders and participants for their support.

Oltean, Laura, Alfred Teischinger, and Christian Hansmann. 2007. “Influence of Temperature on Cracking and Mechanical Properties of Wood During Wood Drying–A Review.” BioResources 2, no. 4: 789-811.