Elm lace bugs, Coyrthucha ulmi, are rarely reported. The top of the thorax of adults appears to be inflated (the hood) and is twice the hight of the rest of the thorax. The outer margins are expanded and lacey (the paranota). The edge of the paranota have a single row of tiny spines. These tannish brown insects are about 1/8 inch long, and are covered with small cells that give the insect a lacey appearance. The antennae and legs are pale brown. Elm lace bugs feed on the lower leaf surface and cause yellow or pale spots to appear on the upper leaf surface. This damage is somewhat like thrips injury and spider mite injury, but lace bug injury is coarser. If much feeding occurs, the leaves may become almost bleached out. Lace bugs also leave "fly specks" or excrement on the lower leaf surface. Almost nothing has been published on the biology of elm lace bugs, but since they feed on a deciduous host, it is highly likely that they overwinter as adults hiding in cracks and crevices of bark. In spring as the new growth emerges, these bugs emerge and crawl to the foliage and feed. Like other species of Corythucha, females probably lay eggs that are dark brown, elongate, and taper toward each end. The top end has a circular cap with a central, pale protrusion. Corythucha lace bug nymphs are small, black or dark brown insects with very pale legs and antennae. They develop through five stages as they molt and grow. Older nymphs are oval and flat and have spines around the edge of the abdomen and thorax. Development probably takes at least seven weeks. 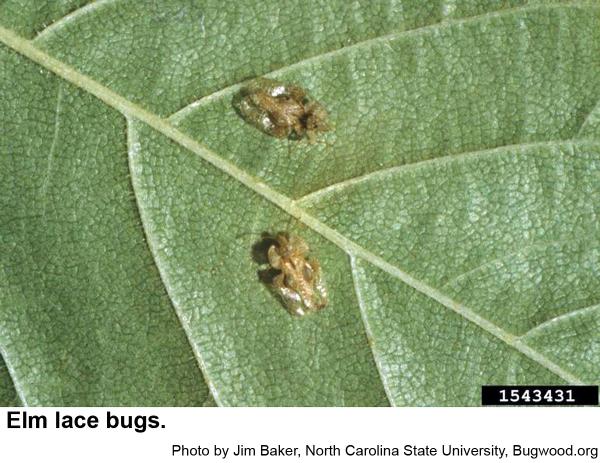 Elm lace bugs are small, brownish, and found on the lower leaf surface.

Elm lace bugs are small, brownish, and found on the lower leaf surface.

American elm is the only host plant listed for the elm lace bug. Infested leaves have pale spots on top and spots of excrements as well as cast skins and perhaps elm lace bugs and their nymphs on the lower leaf surface.

Elm lace bugs are relatively difficult to control if the tree is large. Most of the insecticides labeled for landscape use should give more than adequate control if the tree is not too large to spray effectively. Imidacloprid is a systemic insecticide labeled for landscape use that can be applied to the soil beneath an infested tree. It should give season-long suppression if applied early in the growing season.