The elm sawfly caterpillar, Cimbex americana, is uncommon in North Carolina. It is one of our largest sawfly caterpillars in North America. In past years in the Northern Great Plains states, the elm sawfly has defoliated willow and elm, especially shade trees. Adults are large, deep metallic blue, fly-like insects that emerge in late May through June and mate. Adults feed on the tender bark of twigs and can do enough damage there that they cause some alarm (although to tell the truth this almost never happens in North Carolina). Females "saw" open the leaves of elm to form small pockets and lay an egg inside each -- hence the name "sawfly.". Females place up to 12 eggs per leaf for a total of 30 to 150 eggs each. Tiny caterpillars hatch and begin to feed. Within a month or so, the caterpillars have grown up to 2 1/4 inches long. They then crawl to the soil surface where they spin tough, white, papery cocoons in the litter or just under the soil surface. The cocoons are about 1 inch long. The winter is spent as a non-feeding developmental stage called the prepupa. Some of the prepupae molt into pupae the following spring, but some stay inside their cocoons for two or more winters before pupating. There is one generation per year (or every two or three years). 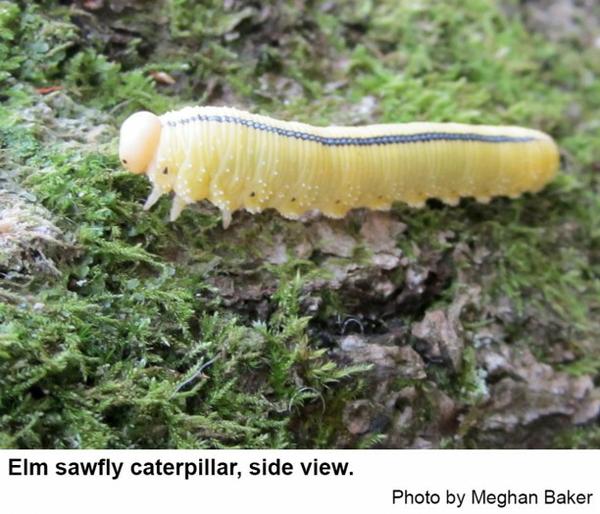 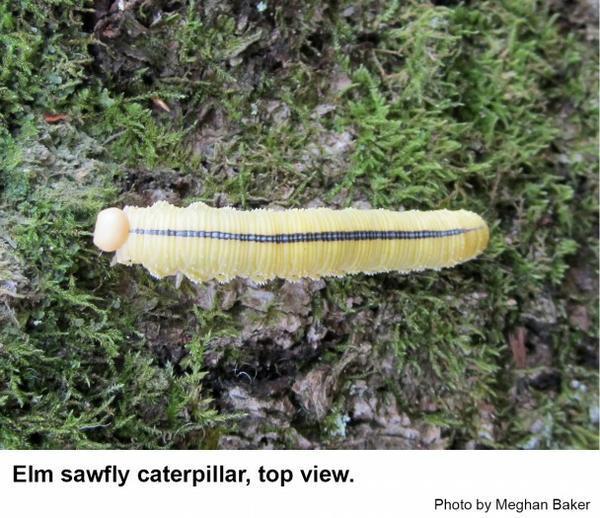 Elm sawfly caterpillars have a blue line down the back.

Elm sawfly caterpillars have a blue line down the back. 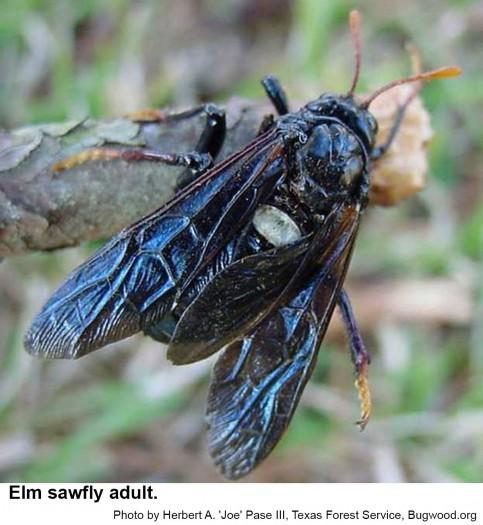 Elm sawflies are about an inch long.

Elm sawflies are about an inch long.

The elm sawfly prefers elms and willows although it has been reported from alder, apple, basswood, birch, boxelder, ironwood, maple, plum, and poplar. Adults chew away the bark of stems to obtain sap. The caterpillars feed on the leaves. In the mid west and further north, the elm sawfly has caused serious defoliation and tip dieback of windbreak and street trees.

Willow, the other preferred host, is a minor landscape tree in North Carolina. Dutch elm disease has eliminated so many elms in North Carolina that perhaps these sawflies don't have the resources to build massive populations. In addition, elm sawflly eggs are plagued by parasites, and the larvae are parasitized by wasps and flies. Shrews and deer mice feed on the prepupae. Sawflies are sensitive to insecticides so anything labeled for any leaf-feeding pests of elm should give adequate control.