The European hornet, Vespa crabro, is our only large wasp that nests in enclosed sites (in hollow trees, attics, out buildings etc.) rather than in the branches of trees or under eaves of buildings. It is also the only large wasp that is attracted to lights. Watching these large wasps bouncing against the window screen on a warm summer night is daunting. Some folks call this insect the Japanese hornet but it's not. (The Japanese hornet is much more slender and is a ferocious predator of honey bees. Japanese hornets sometimes kill honey bee workers at the hive entrance until there are not enough left to prevent the hornets from entering the hive and carrying off the bee larvae and pupae!. Fortunately, the Japanese hornet does not occur in North America.) With European hornets, only mated queens in sheltered locations survive the winter. Next spring each queen establishes a new nest (they do not reuse old nests). Foraging European hornets pose little hazard to people as long as the wasps are not molested. 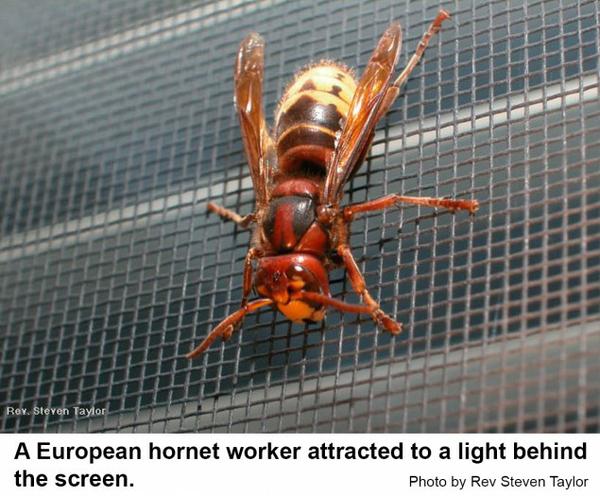 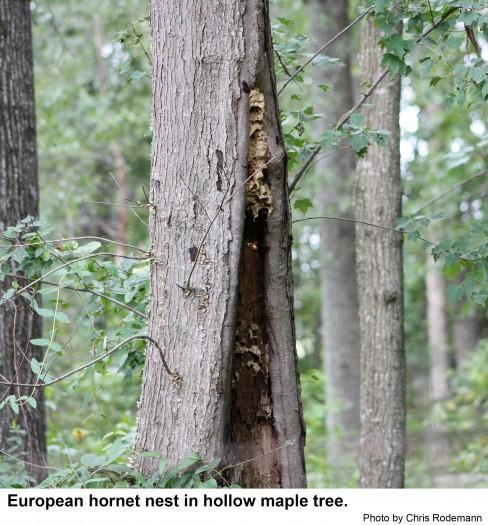 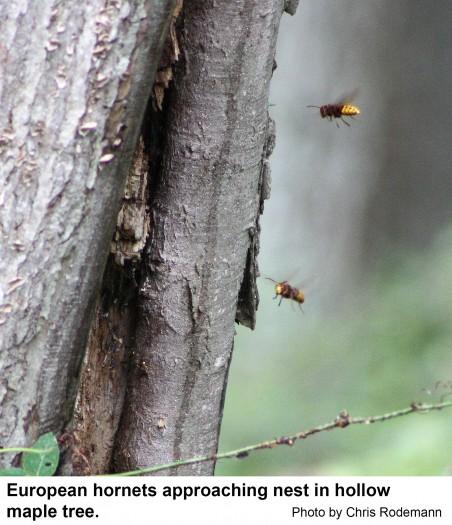 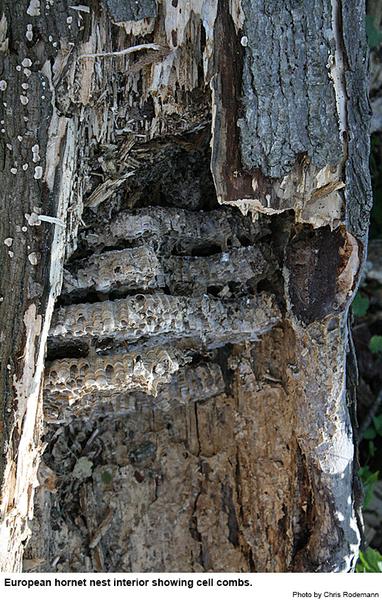 European hornet nest opened to reveal the combs in which the hornets rear their larvae.

European hornet nest opened to reveal the combs in which the hornets rear their larvae.

European hornets chew off the bark of lilac and other ornamentals with thin bark to construct their paper nests. Late in the summer, the social structure of the colony disintegrates and the remaining worker brood is neglected or killed. After the males and new overwintering queens have emerged and mated, the workers sometimes begin building formless "nests" away from the main colony. The first frost will stop this activity by killing the current year's workers (and males).

It is only near the nest that European hornets exhibit their nest-guarding instinct complete with alarm pheromone release and resulting aggressive behavior. As long they are treated with some some respect, European hornets are not likely to sting. Keeping a "flying insect" aerosol on hand while working near foraging workers gives some peace of mind.

One method to eliminate European hornets is to use a duster to puff in Sevin dust into the opening late in the day so that most of the workers are in the nest and have quieted down for the night. When the workers track across the Sevin dust the following day they will be contaminated and will die while they are out foraging. It may take several applications of the dust to achieve complete control as new wasps will be emerging from their cocoons from day to day. However, this methods really works. Another method of controlling European hornets is also done late in the day: use one of the wasp and bee sprays available in grocery stores and hardware stores. Direct the spray into the opening which the hornets use and spray the opening thoroughly. The aerosol will fumigate the hornets as the petroleum distillates evaporate. The pesticide residue left behind should contaminate any workers that emerge the following day. Again, several applications may be necessary because of new hornets emerging from their cocoons.

If the wasps are damaging the twigs of ornamentals or fruit trees, apply an insecticide containing Sevin (carbaryl) to the affected areas of the plants. Retreatment may be needed every 7-10 days, depending upon weather conditions.

If the nest cannot be located, use a European hornet trap made by placing a lighted bulb above a pan of soapy water. Workers flying around the light often dip too low and drowned or they are directly attracted to the reflection of the bulb in the water. The soap is necessary as it breaks the surface tension of water and it is insecticidal as well.