Euthyrhynchus floridanus, the Florida predatory stink bug, is a stink bug, but it is a predator that feeds on other plant pests. It attractive with orange spots on a dark, metallic blue background. This insect overwinters as adults probably in some dry, sheltered location. Eggs are laid the following spring. The eggs hatch 19 to 33 days later. Nymphs of Euthyrhynchus floridanus take a long time to develop through five stages (40 to 67 days). New females wait 5 or 6 days before mating and the eggs are laid 23 to 67 days later. Total developmental time for this species is much longer than for plant-feeding stink bugs. Immature Euthyrhynchus have a strong tendency to aggregate, and they even attack larger prey in concert. Apparently, aggregation behavior allows them to successfully attack prey too large to be subdued by a single nymph. Sometimes the adults aggregate with nymphs, although when times get hard, these bugs sometimes feed on smaller relatives! When the bugs jab their prey with their proboscis, they inject a toxin that slowly immobilizes the prey. Euthyrhynchus bugs have an unusual "wagging" behavior in which the bug rocks its body from side to side while it grips the substrate firmly with its feet. This is thought to be a defensive behavior. behavior. 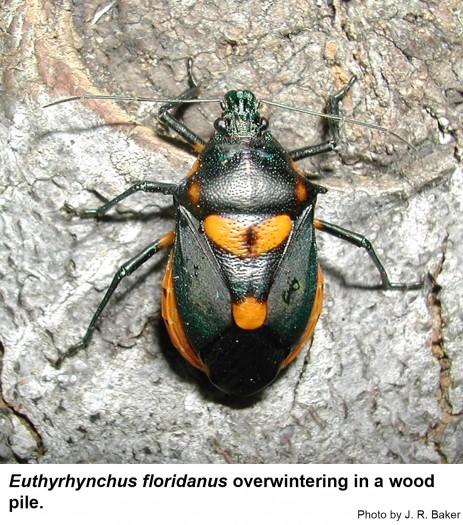 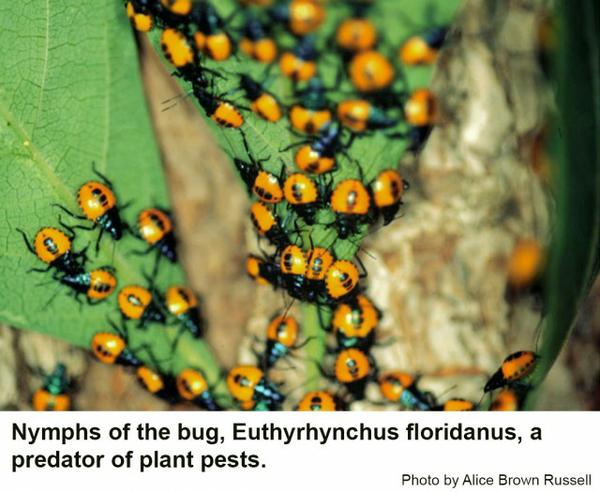 The Florida predatory stink bug is considered a beneficial insect because most of its prey consists of plant-damaging bugs, beetles, and caterpillars. It seldom plays more than a minor role in the natural control of insects, but its prey includes a number of economically important species. This bug is found occasionally on just about any plant in the landscape. It may feed facultatively on plants but never causes noticeable damage.

Plant damage has never been noted for Euthyrhynchus stink bugs. If such feeding does occur, the negligible plant damage is certainly outweighed by their beneficial role in controlling plant feeding pests. Most bugs are susceptible to Sevin insecticide, but in this case, it does not seem to be necessary to treat since the Florida predatory stink bug is way more beneficial than harmful.