Fuller rose beetles are brown to grey as adults, have a short, broad snout that curves down, and fused elytra. Adults are 6 to 8.5 mm long. Eggs are deposited in crevices of bark or between leaves and are yellow and cylindrical covered in a white sticky substance. Larvae are up to 10-12 mm long, white, and legless with a yellow head capsule and black mandibles.

Common host plants include but are not limited to: maples, azalea, camellia, citrus, persimmon, pineapple, strawberry, beans, peach, rose, and potato. Both larvae and adults feed on the plant but adult feeding is most apparent and damaging. Larvae feed on roots. Populations rarely reach high enough levels to cause host plant death but larval root damage can cause stunted growth, reduced water and nutrient uptake, as well as increased susceptibility to disease. Adults feed on foliage, buds, and blossoms of host plants leaving behind a trail of fecal droppings on the uneaten leaves. Entire leaves may be consumed leaving only the midrib. 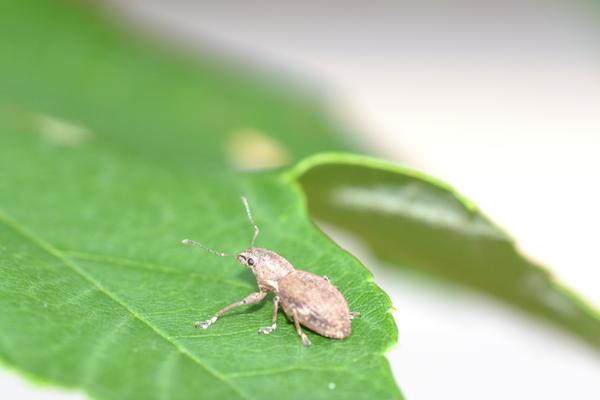 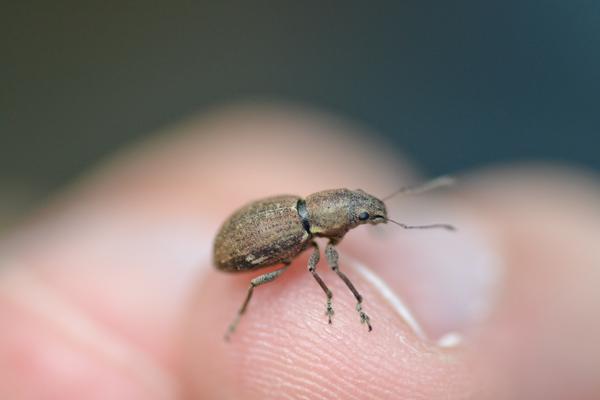 Fuller rose beetle adult from the side.

Fuller rose beetle adult from the side.

There are only female Fuller rose beetles, which reproduce parthenogenetically. They lay eggs in the spring either on the ground or in bark crevices near the ground surface. Upon hatching, larvae tunnel into the soil where they will feed on the root system of the host plant. In North Carolina they will pupate in the soil for up to two months. Adults emerge from the soil from mid-summer to late fall and climb into the canopy of the host plant to feed. The Fuller rose beetle overwinters in the soil as larvae in most regions of the United States but has been found in the adult stage year-round in Florida. There is only one generation of these beetles per year in most regions.

April and May tend to be the peak emergence period of adult Fuller rose beetles. This time is ideal for monitoring for pest abundance. The use of pitfall traps may be sufficient for surveying emerging adults or periodically checking the plant for recent leaf damage and fecal droppings. Adults tend to be nocturnal, so populations will not be active or noticeable during the day. They may be found near leaf buds, twig crotches, or on the ground during daylight. Beating the plant over a white tray can be an effective method for surveying their abundance. Fruit bearing plants should be checked on low hanging fruits for egg masses. 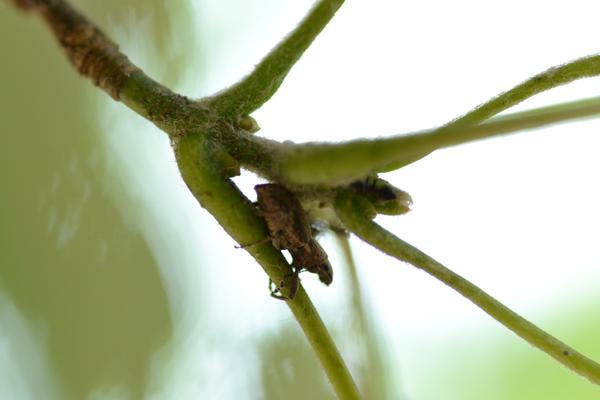 Fuller rose beetle hiding near leaf buds and petioles on a maple tree.

Fuller rose beetle hiding near leaf buds and petioles on a maple tree.

The most effective strategy for controlling Fuller rose beetle populations without chemical application is targeting the adults as they emerge from the ground. Low hanging branches that are touching the ground should be pruned so that the beetles cannot gain canopy access. This leaves the trunk as the only route for adults to get into the canopy. Therefore, a sticky band should be wrapped around the trunk to trap any adults that attempt to climb it. Make sure the material is non-absorbent and will not harm the tree.

Fuller rose beetles have a wide range of natural enemies that may keep populations below damaging levels. The parasitoid wasp, Fidiobia citri, commonly parasitizes beetle eggs and is one of the most effective methods of biological control. Other predators include assassin bugs and preying mantises, which actively hunt the adult beetles. Some parasitic nematodes and fungal pathogens are also known to attack fuller rose beetle larvae.

Foliar sprays of contact insecticides are used to control adult weevil populations within plant canopies. These should be applied as two treatments four weeks apart during the peak emergence time. The purpose of targeting adults is to limit the numbers that proceed to deposit eggs for the next generation. The second application should include an egg-sterilant such as Micromite 80WGS, which causes the adult to deposit sterile eggs or the eggs to become sterile upon contact with the substrate surface. These foliar applications target adults to prevent viable egg deposition and larval development. This will maximize treatment efficacy and has been shown to reduce plant root injury in following seasons. Be sure to minimize foliar applications because over application often results in secondary pest outbreaks, such as spider mites.