Giant conifer aphids are soft-bodied, generally gregarious insects that are often found in large groups. They have piercing-sucking mouthparts that are used to feed on the sap in twigs, branches, trunks, and roots. Most species are restricted to feeding on one genus of tree. Some Cinara aphids such as the white pine aphid attack only one tree species. Giant conifer aphids are large aphids, up to 1/4 inch long, and are long legged and dark. Most aphids have a pair of tube-like structures on the abdomen called cornicles. The cornicles of Cinara aphids are cone-shaped. These aphids are wingless or may have wings. We have several generations a year in North Carolina. Eggs hatch in the spring into tiny aphids. They molt through several stages, becoming larger with each molt. During the growing season all giant conifer aphids are females that give birth to live young. The last summer generation develops into males as well as females. They mate, and females lay eggs on needles or bark. Aphids secrete honeydew as they feed, and other insects, especially ants, bees, and wasps, feed on the honeydew. Some species of ants protect aphids from predators in order to harvest the honeydew. 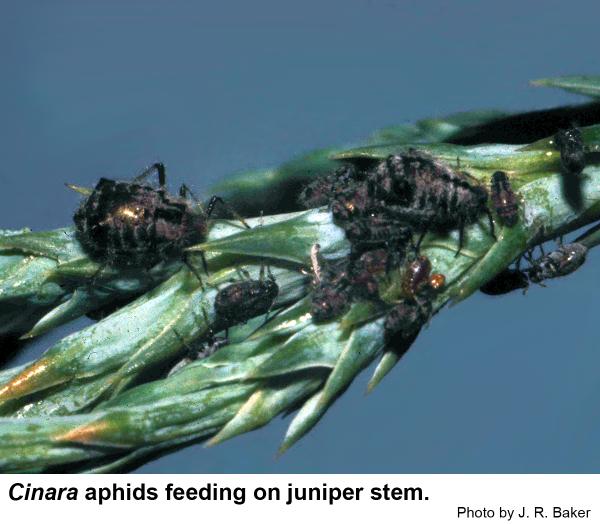 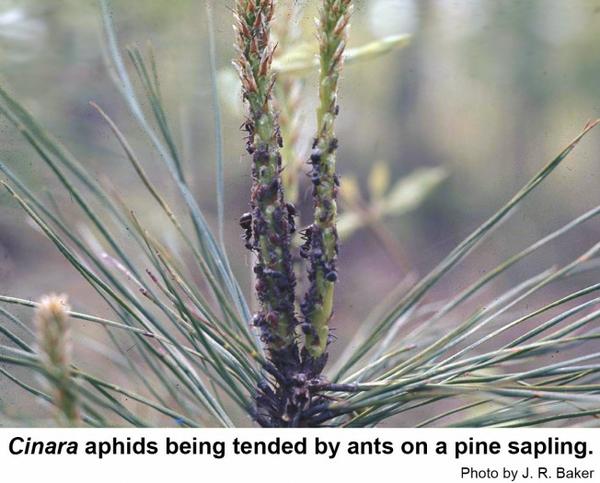 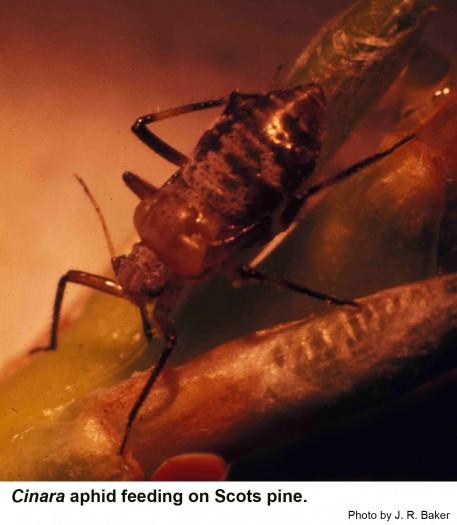 Each Cinara species is specific to a tree genus or even a tree species. Heavy infestations of giant conifer aphids cause yellowing of the foliage and reduce tree growth, especially in young trees. Young seedlings may be killed by these aphids. Populations are usually highest in late spring and may crash by early summer. The best evidence of an aphid population is the presence of honeydew (clear, sugary, sticky liquid), ants attracted to honeydew, or ladybeetles and hover flies that prey on aphids. Honeydew is also a good growth medium for sooty mold and infested host conifers often become dark, sometimes almost black. Sooty molds also grow on the ground cover under a heavily infested tree.

Several lady beetles, lacewings, and hover flies specialize in feeding on aphids. Several parasitic wasps also prey on aphids. If it becomes necessary to treat, numerous insecticides, including horticultural oils and insecticidal soaps, are registered for aphid control. If oils or soaps are used, be careful to avoid white pines and spruces that have a bluish bloom (waxy coating) on the needles. Oils can remove this bloom, which leaves the tree a sickly yellow-green color. On those trees, consider using a systemic pesticide such as imidacloprid for aphid suppression. When using any pesticide, thorough coverage is necessary.