Many species of ambrosia beetles can infest woody ornamental, fruit, and nut trees throughout North Carolina and can cause significant damage in nursery, landscape, and orchard settings. The most common is granulate ambrosia beetle, Xylosandrus crassiusculus, which was introduced to South Carolina from Asia in the early 1970s. It has since spread throughout the Southeast.Granulate ambrosia beetle infestations can be identified by toothpick-like strands protruding up to 1.5 inches from the host plant. The strands of boring dust are produced by the female beetle as she excavates her gallery. The strands are fragile and are easily broken off by wind or rain leaving only pencil-lead sized holes. Individual plants may contain from one to hundreds of individual beetles. 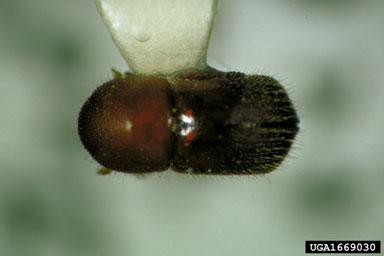 Granulate ambrosia beetles become active around the first of March in Raleigh, North Carolina, and peak in early April. However, the timing is very dependent on local weather and beetles can emerge much earlier and attack trees during warm weather. Beetles remain active through the summer and into the fall. Nursery stock is attacked primarily in spring during the first generation but landscape trees may be attacked all summer. Females bore into twigs, branches, or small trunks of susceptible hosts. They excavate tunnels in the wood, introduce ambrosia fungus, and lay eggs to produce a brood. It is the growing fungus on which the beetle grubs feed, not the wood. Eggs, larvae and pupae are found together. There are no individual egg niches, larval tunnels or pupal chambers. Females remain with their brood until maturity. Males are small and flightless and often remain within the gallery. New females mate with their brothers, if present, before emerging to attack a new host. Research at Tennessee nurseries determined that it took an average of 55 days for the insect to complete one generation in that climate. Thus beetles enter trees in early spring, oviposit, develop through to adulthood, and emerge 55 days later. 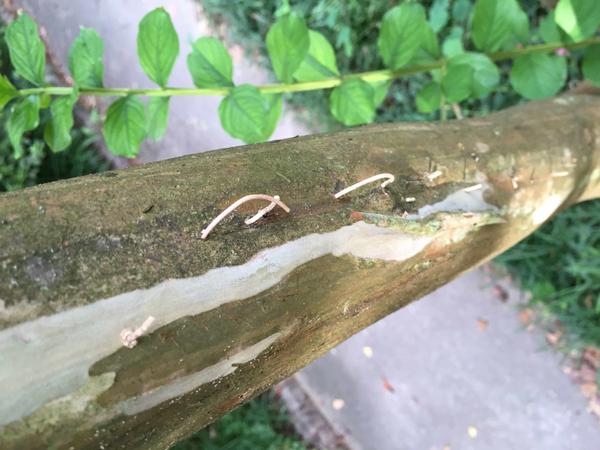 Female beetles bore into the trunks and branches (1.0-2.5 inches in diameter) of young trees and excavate galleries in the heartwood. In addition to boring damage, female beetles inoculate trees with ambrosia fungus which can block xylem vessels and interfere with vascular transport. Boring can create entry points for pathogenic fungi such as Fusarium spp. Infested plants often die from boring damage, ambrosia fungus, or infection by a secondary pathogen. Trees are selected by female granulate ambrosia beetles based largely on whether trees are producing ethanol in response to stress. The most common stress that induces attacks is flooding. Trees groing in soil or meia with greater than 30% moisture content are most suseptible. These wet conditions often occur in nurseries during spring. Other stress includes frost damage. Visible symptoms include wilted foliage and strands of boring dust protruding from small holes. Serious attacks that result in tree death usually at leafing-out stage in spring. Infested nursery stock typically dies or is unmarketable and should be burned or chipped to prevent new adults from emerging. Landscape trees may survive attacks but should be monitored for dieback and removed if necessary. 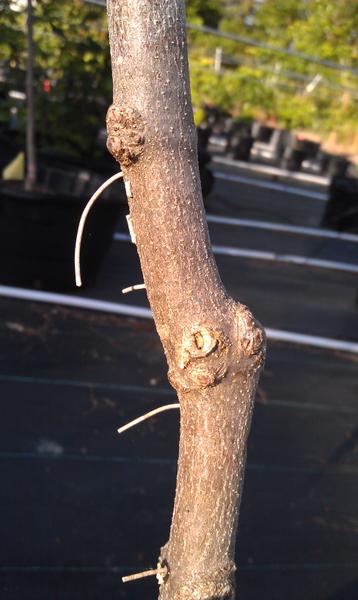 Monitor for ambrosia beetles in late winter and early spring using ethanol baited traps. These can be easily made of 2 liter soda bottles. When beetles are captured in traps begin preventive applications to nursery stock. Preventive applications are not typically recommended in landscapes.

Preventive applications of pyrethroid insecticides can protect trees by preventing granulate ambrosia beetles from excavating galleries. However, once beetles are inside trees they cannot be killed with insecticides and fungicides are ineffective against the ambrosia fungus. Thus, the timing of preventative insecticide applications is crucial to protect trees from damage by this pest. Apply sprays after beetles are first detected in monitoring traps.

Heavily infested plants or plant parts should be removed and destroyed. It may be best for large growers to wait 3-4 weeks after trees are attacked before removal so as to concentrate and destroy the greatest number of beetles, possibly sparing some healthy trees.

A landscape borer spray containing a pyrethroid such as permethrin or bifenthrin can be used and may have to be reapplied every two to three weeks while beetles are active. A surfactant or sticker may help the insecticide adhere to bark and provide longer protection. Spray wands can be adapted to reduce insecticide volume and to reduce killing beneficial insects in tree canopies.

Permethrin and bifenthrin are two common pyrethroids used to reduce ambrosia beetle attacks. Systemic products such as imidacloprid are ineffective because the beetles do not feed on vascular plant tissue.

Homeowners have a few products available that contain the active ingredient permethrin or bifenthrin that may be sprayed on the trunk, such as certain Spectrum, Ortho, and Bayer Advanced products. Examine the label for these active ingredients and for some type of borer listed on the label. "Granulate ambrosia" beetle will not specifically appear on the label. You are better off doing everything that you can to reduce the stress of the tree or shrub in hopes that the plant will outgrow the attacks. Organic products such as Pyrenone or PyGanic may be used, but are expensive and may not be available in small amounts. Their effectiveness has not been well studied. 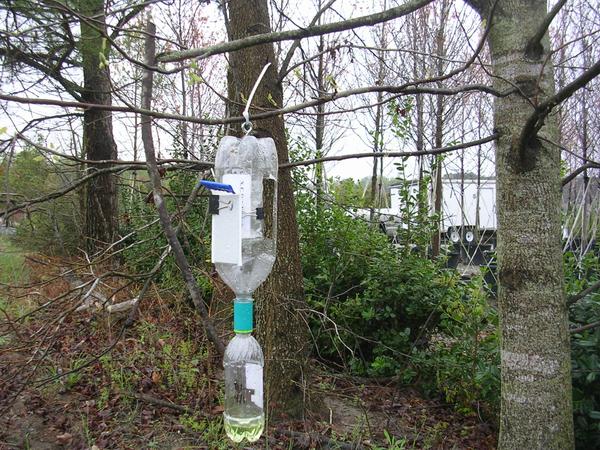 Ambrosia beetle trap made from a 2 liter soda bottle.

Ambrosia beetle trap made from a 2 liter soda bottle. 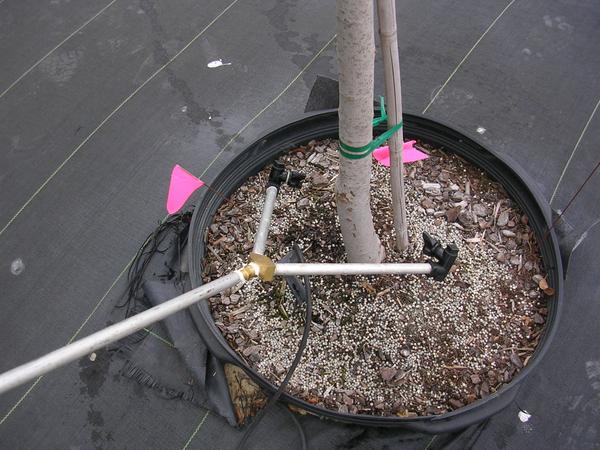 Spray wand adapted with two nozzles to spray all sides of a tree trunk.

Spray wand adapted with two nozzles to spray all sides of a tree trunk.

Some growers find ethyl alchohol based traps (Figure 4) helpful to monitor for adult beetles in the spring. These can be homemade soda bottle traps (Baker trap), Lindgren funnel traps, or modified Japanese beetle traps. Soda bottle traps are least expensive, but are less durable. The ethanol release strip purchased for use with the funnel trap tends to provide the most consistent lure release.