For decades the greater peachtree borer, Synanthedon exitisoa, was known simply as the peachtree borer. These borers are caterpillars of a dark, clearwinged moth. The moths fly during the day and closely resemble paper wasps (the moths do not sting). The 3/4-inch-long females are bluish black with an orange band on the abdomen. Male moths are smaller with transparent areas on the wings. These moths emerge throughout the growing season, but the great majority of them are in flight between August 15 and September 15. Female moths lay eggs in crevices or under rough bark on the tree trunk around the lower portion of the trunk usually near the crown. Some females can lay 400 to 900 (perhaps up to 1200 eggs). More than half of the eggs are laid during the first day. The moths live about 5 days. Larvae hatch in 8 to 9 days and bore into the main trunk and larger roots near the soil surface. They feed on cambium tissue and eventualy weaken or kill the tree. Borers overwinter as larvae in the tunnels and resume feeding the following spring. Most individuals complete development during the summer. Part of the population may require two years to complete the life cycle. Pupation occurs within a silken cocoon covered with chewed wood and frass. 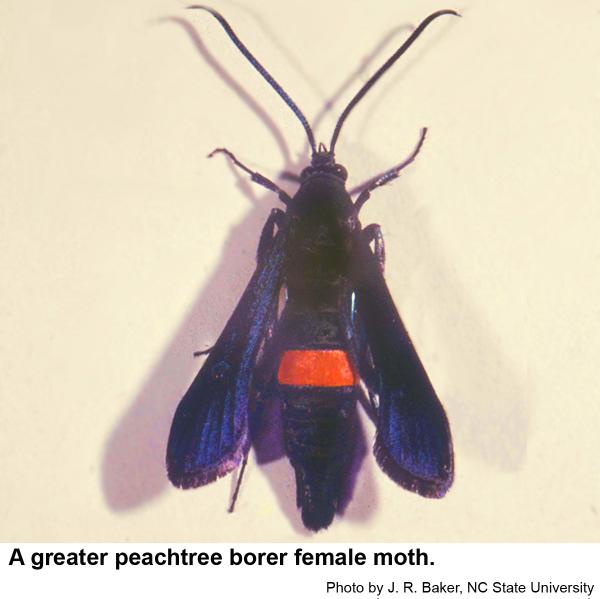 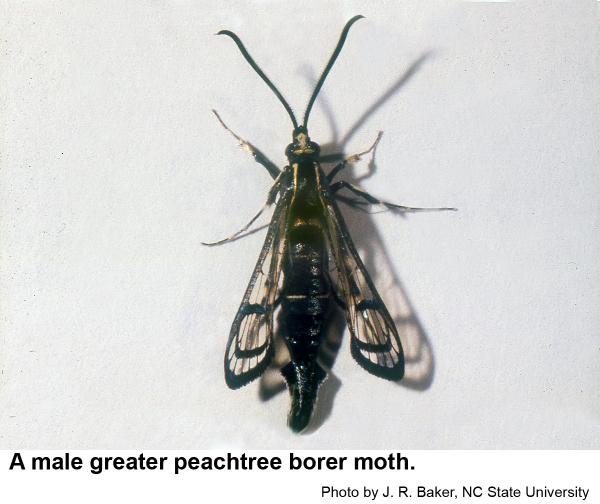 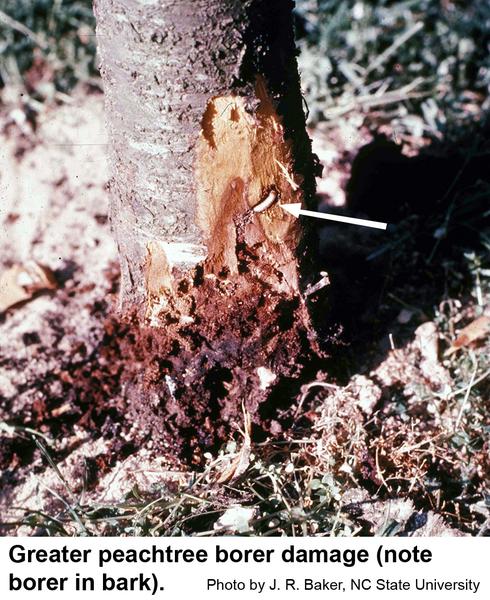 Greater peachtree borers tunnel in the cambium at the base of their host plants.

Greater peachtree borers tunnel in the cambium at the base of their host plants.

Greater peachtree borers infest cherries, cherry laurel, flowering peach, ornamental plums, peach, plum and other stone fruits. This pest prefers healthy plants. They can be detected by the presence of gum and frass around the base of a tree, sometimes in surprisingly large amounts. The gum around new feeding damage is soft, sticky, and light brown in color, whereas older damage is hard and dark brown. Symptoms are often first noticed in the spring when the borers are maturing. Greater peachtree borers feed on cambium tissue and eventualy weaken or kill trees completely.

Although greater peachtree borers prefer healthy plants, healthy plants are able to overcome damage more readily than stressed plants. After taking a soil sample from beneath a host tree, be sure not to exceed the recommendations of amendments recommended in the soil sample test results. To prevent greater peachtree borers, use an insecticide that has permethrin or one of the other pyrethroids (such as bifenthrin, esfenvalerate or cyfluthrin) as the active ingredient. Thoroughly saturate the bark at the base and lower part of the trunk several times during the season, but especially before and after the peak moth emergence about the first of September. Chlorantraniliprole (Acelepryn) is a systemic insecticide labeled for clearwing borers. David Nielsen at Ohio State University found that Acelepryn gave very good control when applied at the first of the growing season.