The planthopper, Acanalonia conica, feeds on a wide variety of herbs, shrubs, and trees. Immatures of the planthopper, often secrete enough white, fluffy wax that they completely obscure themselves from view. (Little wonder: the nymphs resemble toads with their mottled gray skin and humped appearance. Only their mothers could love them!) The fluff may help protect the nymphs from predators such as dryinid wasps. When a nymph is disturbed, it often jumps 12 to 18 inches (hence the name "plantHOPPER"). There is one generation per year. Females insert their eggs into the bark of their host plants by using their ovipositor (literally "egg placer") that is shaped like a teeny sword. The next spring, the eggs hatch and the new nymphs feed through the bark of twigs and stems. Development may take over 300 days. Nymphs of this species sometimes feed in groups that include other planthopper nymphs (such as the citrus flatid planthopper, our most popular planthopper). 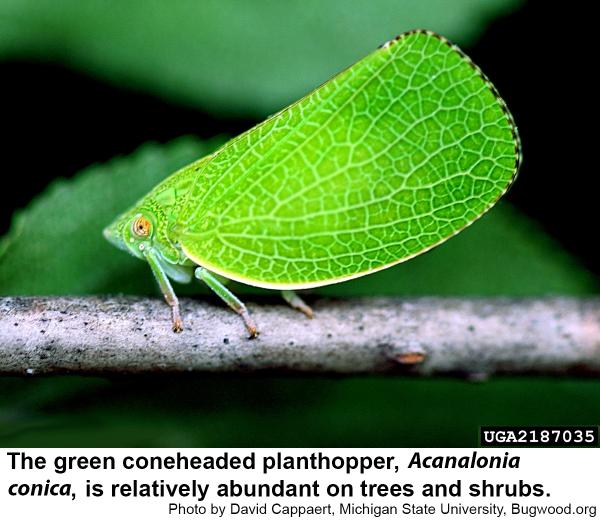 Green coneheaded planthoppers feed on numerous ornamental herbs, shrubs, and trees. Direct feeding by planthoppers does not seem to harm the health of most ornamental plants. However, planthoppers excrete a sweet, sticky substance called honeydew in which dark fungi may grow. These fungi are called sooty molds because infested plants often become dark gray or almost sooty black. Sooty molds are not parasitic on plants, they merely use the plant as a substrate while they develop in the honeydew. Planthoppers have been reported as pests of gensing, a crop in which appearance is important to the consumer. The green coneheaded planthopper has recently been introduced into Europe where it is considered to be a greater threat than here in North Carolina.

Nymphs of Acanalonia conica are plagued by dryinid wasps. Female dryinids closely resemble wingless ants. Females jab their eggs into the hapless nymph and the dryinid larva feeds inside the nymph for a while. Then it protrudes through the body in a most unsightly manner and develops a hard case as it matures and kills the nymph. Nymphs are also fed upon by mites in the genus Leptus, and a caterpillar, Epipyrops barberiana, feeds on nymphs and adults. Green coneheaded planthoppers do relatively little damage to ornamentals, but may cause amateur horticulturists some alarm. First try dislodging them with a stream of water from a garden hose. It is unlikely that green coneheaded planthoppers are resistant to pesticides so that any insecticide labeled for home use in the landscape should give adequate control.