The hickory horned devil, Citheronia regalis, is the largest caterpillar of the United States. Although it has a ferocious appearance, the hickory horned devil is harmless. This worm starts as a tiny caterpillar after hatching from one of hundreds of eggs laid by a regal moth. Over a matter of weeks, it grows and molts until it reaches its amazing mature size (almost 6 inches!). The fully-grown hickory horned devil has a brown head, dark green body, black prolegs and numerous spines. Each body segment has four or more short, black spines around in a row around it. The two body segments toward the front have four long projections each that are brown at the base, black at the tip and curve back. These are the "horns" that give the caterpillar its ferocious appearance and name. The "horns" are sometimes 3/4 inch long. Mature hickory horned devils crawl to the soil and dig in to form a subterranean cell in which they molt into a pupal stage. The shiny, dark-brown pupa is about two inches long (or even longer) and is somewhat cylindrical. The fall, winter and spring is spent as a pupa in the soil. Next summer, the insect molts into the regal moth. Regal moths are large and have stout bodies. Females (wingspan up to 6 inches) are larger than males. The head and body are orange-red and yellow spots and markings. The wing veins are also red-orange. The dark areas between the veins are dull gray. The forewings of males are pointed toward the tips and narrower than the back wings. Each forewing has two light spots at the base and seven oval spots toward the outer edge. The back wings are rounded, with some yellowish shading at the base. The eggs are cream and smooth, shiny and oval (about 1/8 inch long) 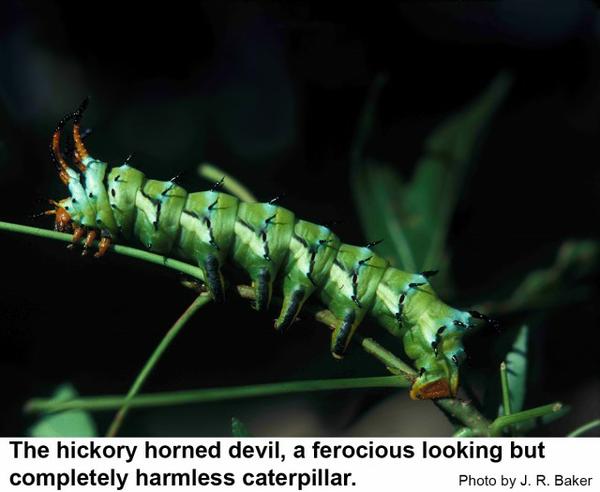 The hickory horned devil is our largest caterpillar.

The hickory horned devil is our largest caterpillar. 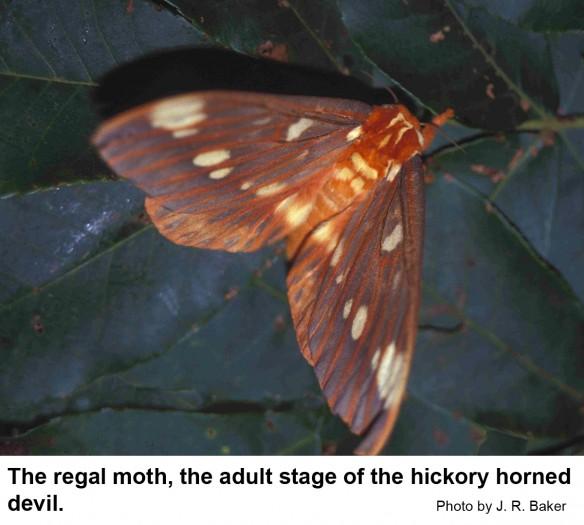 The regal moth, adult of the hickory horned devil.

The regal moth, adult of the hickory horned devil.

One reason that hickory horned devils are such a surprise is that they are actually kind of rare. In spite of their large and forbidding appearance, birds are apparently fond of them for food. Not only that, but parasites and diseases also kill a portion of the population. Consequently, very few of the hundreds of eggs laid by regal moths successfully develop and produce offspring of their own. Because hickory horned devils are harmless to humans and are relatively rare, no control measures are needed.