Horsehair worms, Phylum Nematomorpha, are nematode-like parasites that develop as larvae inside insects. Once the larval worm matures, it waits for the insect to die or fall into water so that the worm can emerge to complete its life cycle in water. Adult horsehair worms are aquatic and lay millions of eggs in a stringy, gelatinous mass (some strings are more than 7 feet long!). The tiny, newly hatched larvae swim about for a day or so and then are thought to encyst on vegetation where they are accidently consumed by crickets, grasshoppers, beetles or some other insects or the larvae may be ingested as its host insect drinks infested water. The worms develop inside the host insect and eventually kill it. Some horsehair worms grow almost 28 inches long (!) but all of them are extremely slender. They get their name from the mysterious appearance of the worms in watering troughs where people evidently imagined that the hairs from the horses fell into the trough and "came alive." Evidently infected grasshoppers or other insects fall into the water, rot, and release the horsehair worms. The newly released horsehair worms are white or pale, but soon darken to brown or almost black. As the worms wriggle about in water, they become tangled up into a loose knot, hence the other common name, Gordian worms (after the famous Gordian Knot). 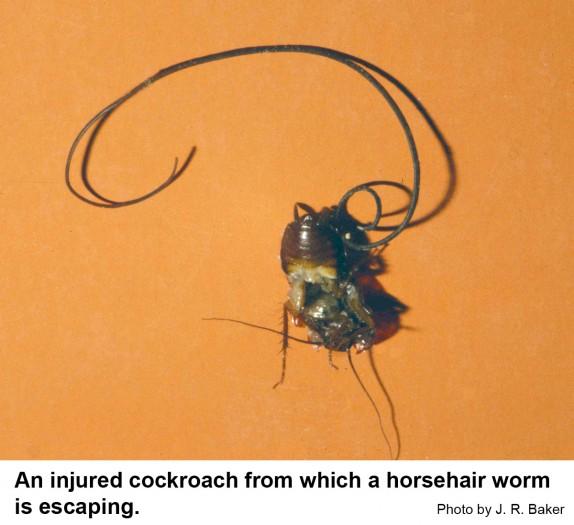 The top view of an injured cockroach from which a horsehair worm is emerging.

The top view of an injured cockroach from which a horsehair worm is emerging. 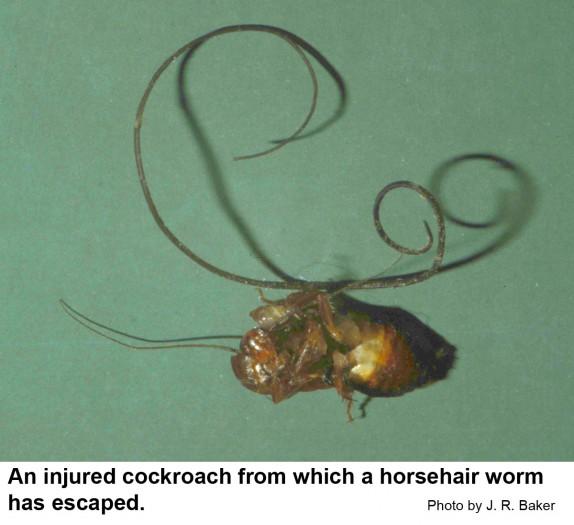 The underside of an injured cockroach from which a horsehair worm has just emerged.

The underside of an injured cockroach from which a horsehair worm has just emerged.

Skip to Habitats and Hosts

No control seems necessary. It would probably be a good idea to cook them before eating them.