Indian wax scale insects, Ceroplastes ceriferus, are tiny, brownish-purple females with microscopic legs and a thick covering of sticky, white wax. Wax and all, they are about 1/4 inch long. There are no males. The eggs are ovoid, pale purple, and resemble pollen when shaken onto a white surface. Eggs are found under adult scales. From the eggs hatch crawlers which are the mobile stage. They are flat and tiny. In a mass, newly hatched crawlers appear rusty red. After molting, crawlers insert their mouthparts into the plant and remain fixed there. Each scale secretes wax tufts, forming a star. This is called the star stage. Larger nymphs secrete wax tufts that merge to resemble a cameo pin. This is the cameo stage. 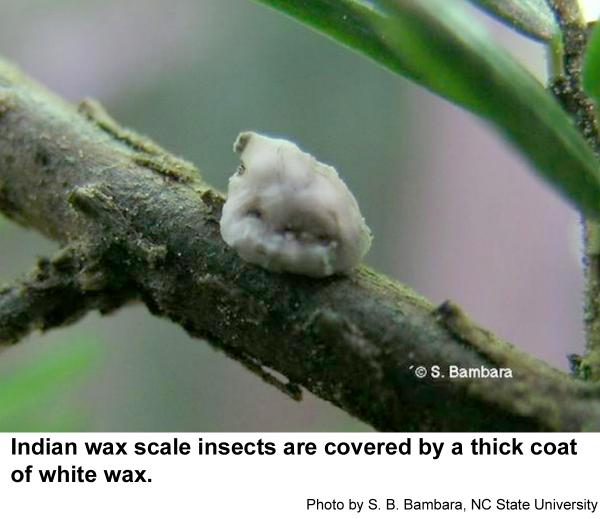 Indian wax scales are usually found on twigs and stems.

Indian wax scales are usually found on twigs and stems. 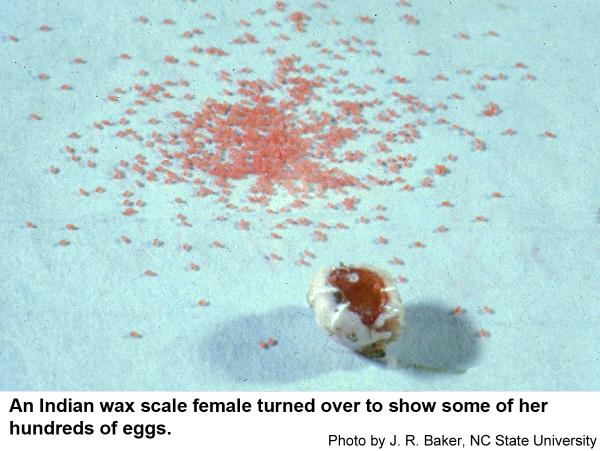 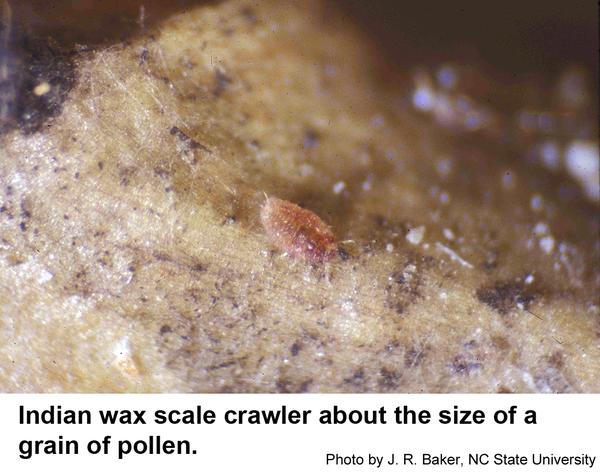 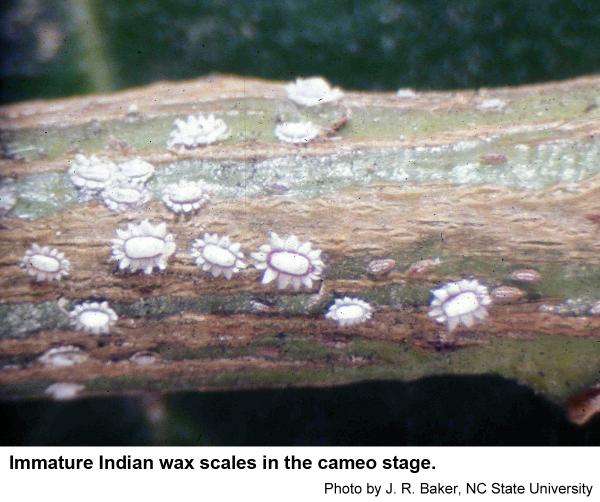 A severe infestation of Indian wax scale detracts from the host plant's appearance because of the many white scales and the copious honeydew that they secrete. A black fungus called sooty mold grows in the slightly sugary honeydew, further disfiguring the host plant.

Indian wax scales begin to lay eggs in March, each scale laying from 1,200 to 2,000 eggs. By late May, tiny crawlers hatch and move about, searching for a place to feed. Feeding occurs mostly along the twigs. Occasionally wax scales settle along the leaf midribs. Once the crawlers insert their sucking mouthparts into the host plant, they do not change locations again. The crawlers then secrete the waxy covering from which the name is derived. The young Indian wax scales mature throughout the summer, producing a thicker waxy covering and becoming increasingly tolerant to pesticides. They overwinter as adults. 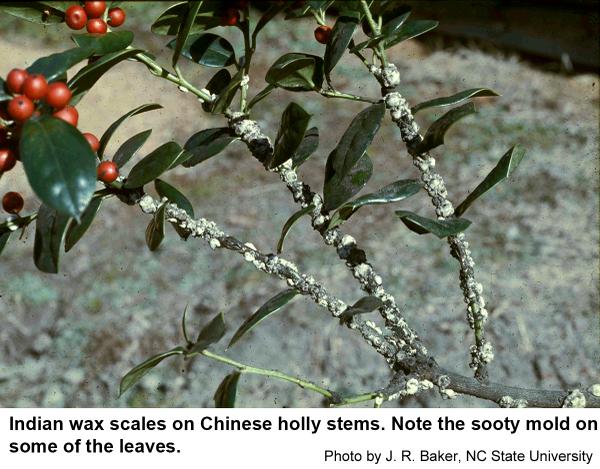 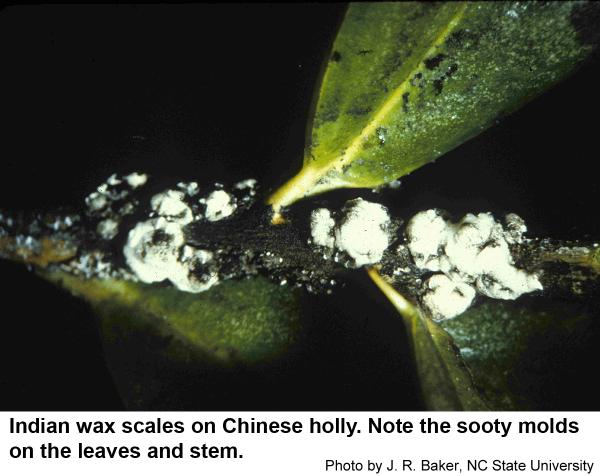 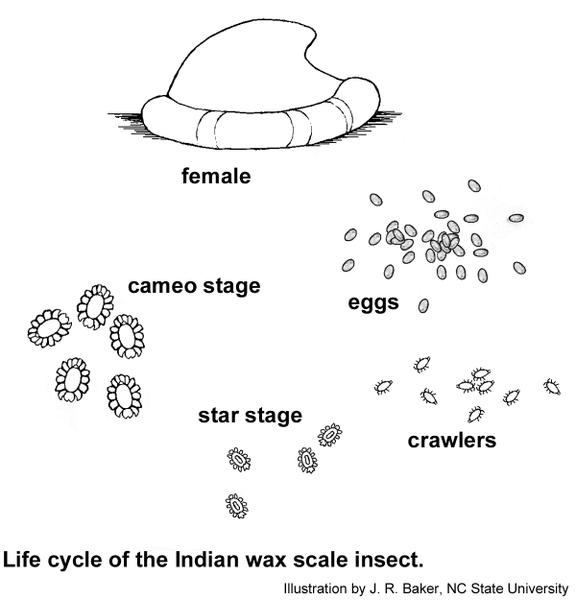 Indian wax scales have one generation per year.

Indian wax scales have one generation per year.

Residential Recommendations
Handpicking scales or scraping the scales off in winter (if practical) is an effective control measure. Since they may lay their eggs apart from their host plant, the scales should be destroyed after removal and not just dropped to the ground. The Indian wax scale seems to be one of the most difficult ornamental plant pests to control during much of the year. This is partly due to the fact that the insect is protected from contact insecticides by a waxy cover. However, the crawlers are susceptible to pesticides. Therefore control measures should target the crawler stage.

The tiny, fragile Indian wax scale crawlers emerge from under the mother scales in late May and early June. Because there is only one generation per year, applying carbaryl (Sevin) or a pyrethroid to the crawler stage in early June will give effective control. Several formulations of carbaryl are available. However, carbaryl is detrimental to natural enemies, pollinators, and other nontarget insects. If chemical control is opted for, homeowners may find pyrethroids useful. Pyrethroids are toxic to insects but are not particularly hazardous to humans and pets (other than fish - avoid using pyrethroids around pools, ponds, and streams). Pyrethroids labeled for residential landscape use are readily available in most big box stores, plant centers, and nurseries. Active ingredients of all pesticides are listed on the front label usually in very small font near the bottom. Active ingredients of pyrethroids end with "-thrin." Pyrethroids other than resmethrin and pyrethrum have a long residual life in the environment so one treatment should suffice. Be sure to follow the directions for safe use found on the label of whatever pesticide is used.

Commercial Recommendations
The following pesticides are labeled for soft scale insects and are more compatible with beneficial insects than carbaryl, acephate, or pyrethroids. It is still important to target the vulnerable crawler stage which should emerge in late May or June. Insecticides with systemic activity will also help get insecticide to the feeding insects. Available products with systemic activity, reside within the plant and are less harmful to natural enemies. Conserving natural enemies reduces the likelihood that pests will rebound or that a secondary pest will outbreak. 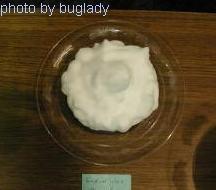 A Moonpie decorated like an Indian wax scale by Suzanne Wainwright-Evans, the Buglady.

A Moonpie decorated like an Indian wax scale by Suzanne Wainwright-Evans, the Buglady.