As the value of insect scouting is better realized, more growers are using yellow sticky traps in greenhouses to monitor pest populations. It seems worthwhile to discuss the identity of insects which are attracted to the traps. Being able to recognize the most common insects found on sticky traps allows the grower to select an appropriate pest control strategy. For example, were traps to show a sudden increase in numbers of dark flies, the proper control measures could be a) do nothing (shore flies), b) drench the media with an insecticide (fungus gnats) or c) spray the foliage thoroughly (leafminers). Additionally confusing the matter, aphids also have winged forms that are attracted to yellow sticky traps. Were the greenhouse to have an established population of leafminers, then there is a good chance that beneficial tiny parasitic wasps will also show up on the traps. Whiteflies are also attracted to these traps. As whiteflies are entangled in the adhesive, they change from snowy white to orange. In this orange condition, whiteflies could be confused with thrips, which also appear orange on the sticky traps.

When insects alight on a yellow sticky trap, they immediately struggle and become ensnared in the adhesive, often in awkward positions. The wings may be free of the adhesive or glued down securely. The wings are very important for identification. Antennae (feelers) on the heads of insects are also useful for identification. Unfortunately, they are fragile and may break off. The antennae and microscopic hairs of thrips almost always break off in the adhesive when trying to remove thrips for species determination. However, the yellow traps can be used to monitor whether thrips populations are rising or falling.

To be serious about differentiating small insects that are gummed up in adhesive, some sort of magnification is necessary. A lens from 5X to 10X magnification can be obtained from hobby shops, science stores, book stores, and large retail stores. While examining the sticky trap, it would be well to have waterless hand cleanser nearby. The adhesive used on the cards is a polybutene-naphtha inert rubber polymer that remains viscous for long periods. It is difficult to keep the adhesive off your hands (and hair) when the traps are examined closely. 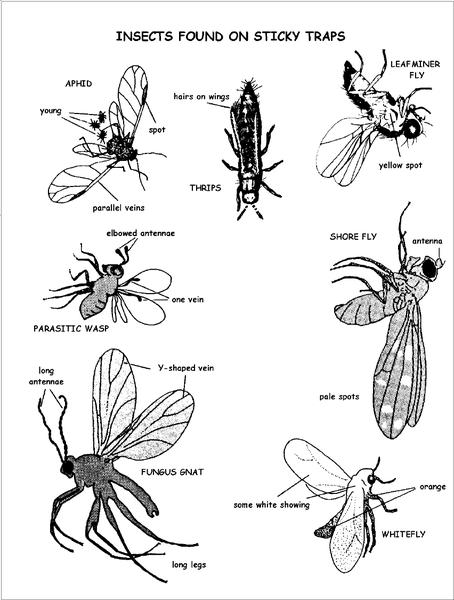 The wings of aphids often settle symmetrically on each side of the body. Sometimes these trapped aphids give birth to several nymphs before they die and their bodies shrivel up. After a few days, aphids look like a tiny version of "road kill", that is, only parts of them can be recognized. Fortunately, the front wings of aphids usually have two parallel veins close to the front edge. The legs and antennae of aphids are often long and skinny as well. 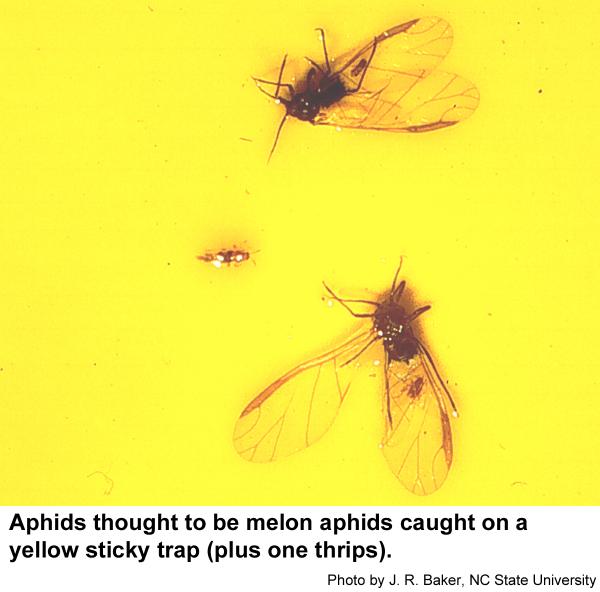 Fungus gnats are small, dark, mosquito-like insects with only two gray wings. Each wing has a distinct, Y-shaped vein at the tip. Fungus gnats have relatively long, skinny legs and antennae. 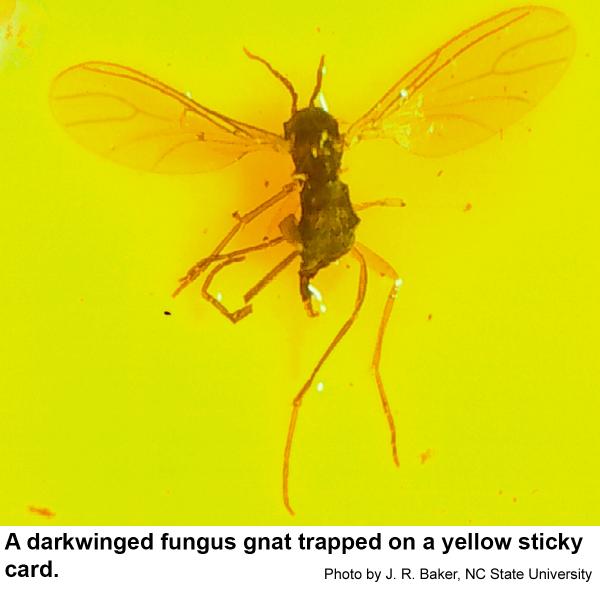 Leafminer flies are shaped like eye gnats and have only two wings. Unless the specimen is completely mired in the adhesive, it is possible to see a conspicuous yellow spot on each side. Leafminer flies have a short antennae and legs that are of moderately long. 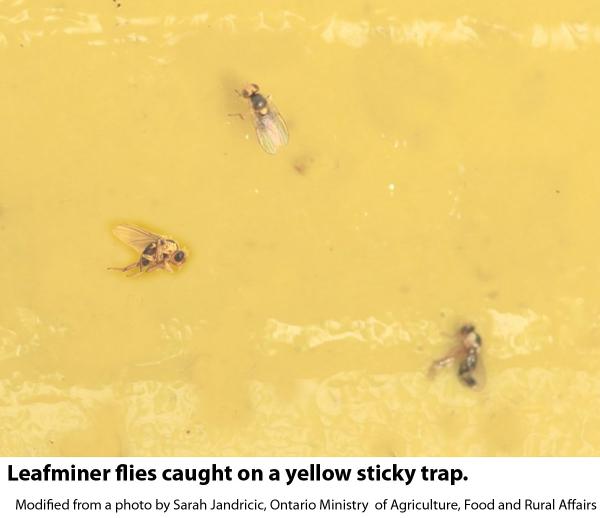 Leafminer flies have a yellow dot on the thorax and yellow between the eyes.

Leafminer flies have a yellow dot on the thorax and yellow between the eyes.

Parasitic wasps usually have antennae elbowed like those of ants. The forewings have only one vein which zigs toward the front margin and zags away. Typically, there may be a few on each trap. Usually parasitic wasps are more pointed at the rear than flies and have four wings instead of two. If you have lots of tiny parasitic wasps on the traps, something peculiar is happening. 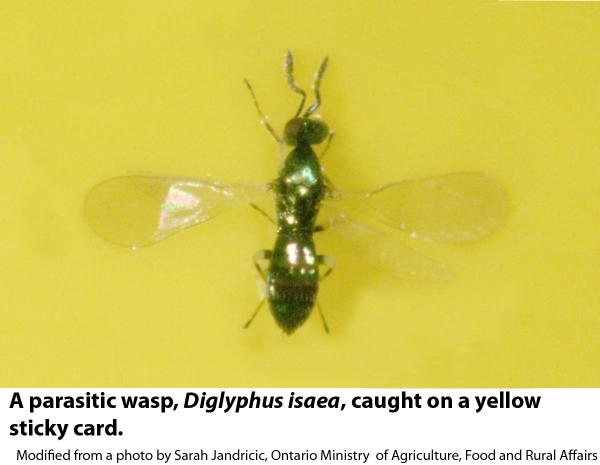 Parasitic wasps get tangled up in yellow sticky cards at times.

Parasitic wasps get tangled up in yellow sticky cards at times.

Shore flies are the largest flies commonly found on sticky traps other than an occasional house fly or horse fly. Shore flies are about the size of the fruit flies (vinegar flies) that are attracted to sliced tomatoes or melons in the summer, but shore flies are dark with dark eyes, legs, and wings. The antennae are short and the legs are moderately long. The wings (only two) often have noticeable light spots. 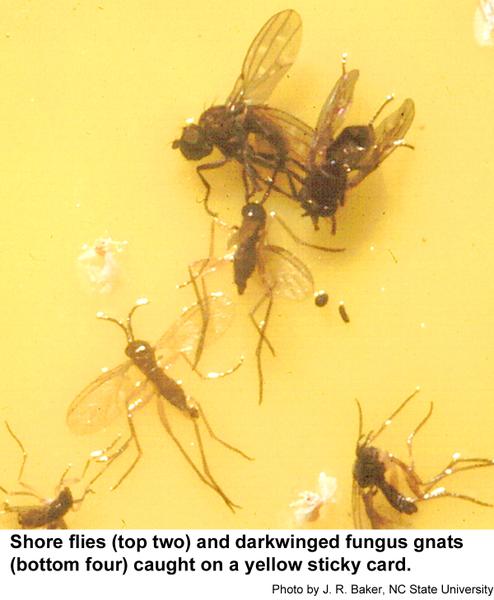 Shore flies resemble eye gnats but they have whitish spots on their wings.

Shore flies resemble eye gnats but they have whitish spots on their wings.

Thrips are the tiniest insects found in any abundance on sticky traps. Thrips seem to fold heir wings over their abdomens before sinking into the adhesive. They seem to accept their fate without struggle. Consequently, most specimens appear spindle-shaped with the wings protruding neatly at the rear. Wings are coated with hairs, but you may have to look closely at several specimens to detect the fringed edges. Stocky antennae may protrude in a V-shape at the front. These antennae are more fragile than they may appear. 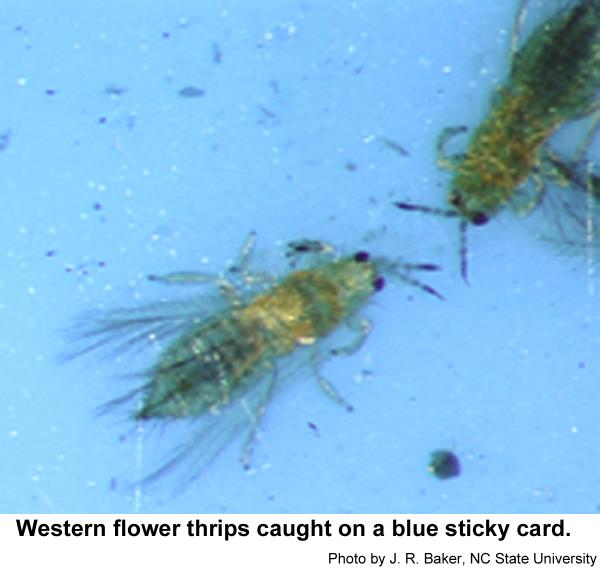 Whiteflies lose their white, waxy bloom as they are entrapped by the adhesive. The Insect shows its true orange color and its fragile nature on the traps. Whiteflies are only a little larger than thrips. Usually enough of a wing or leg or other part protrudes about the adhesive so that the white bloom reveals the identity of the whitefly. 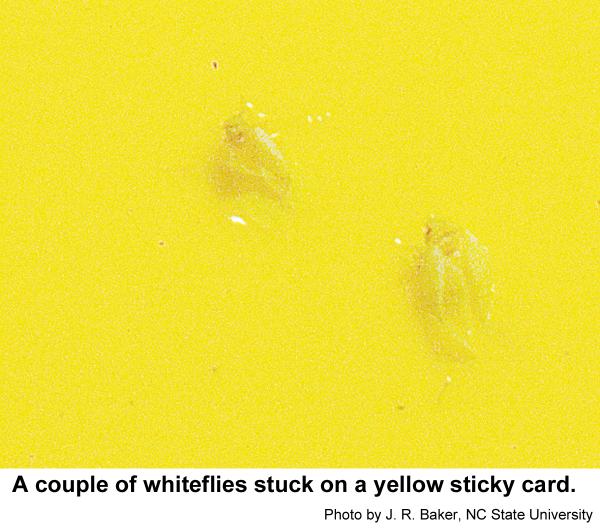 This house fly-like fly is turning up in many greenhouses. It is predatory on fungus gnat adults, in particular. It can be quite numerous and is often seen resting on parts of the benches watching for prey. 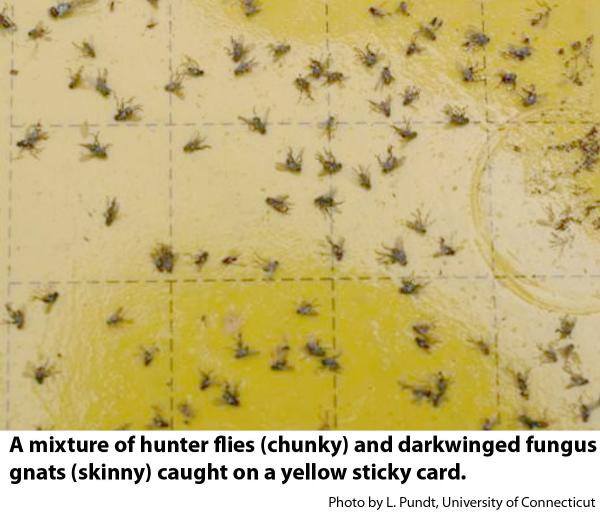 Many different kinds of insects show up on sticky traps. Even entomologists may not be able to identify them either after being gummed up in the sticky polymers. So species identification of all of the insects on a sticky card may not be possible. Hopefully, this Insect Note will allow you to keep a watchful eye on any problem before it arises.