The ironweed longhorn borer, Hemierana marginata, is a small, very dark beetle with antennae longer than the whole insect. It has an orange patches on either side of the thorax that continue onto the head sometimes forming a "V." On some specimens, the orange patches extend onto the "shoulders" of the wings. The antennae are very dark and somewhat hairy. Not much has been published on its biology, but like other stem-boring longhorned beetles, females chew holes in host plant stems in which they insert eggs. Then the female girdles the stem below the egg holes to provide dead plant material for their grubs. Apparently no description has been made of the grubs, but it is highly likely they are pale, slender, and noticeably segmented with brown heads that develop and pupate inside the severed host stem. This beetle is in flight from May though August so that Echinacea, ironweed and perhaps other plants in the sunflower family may be attacked throughout the growing season. 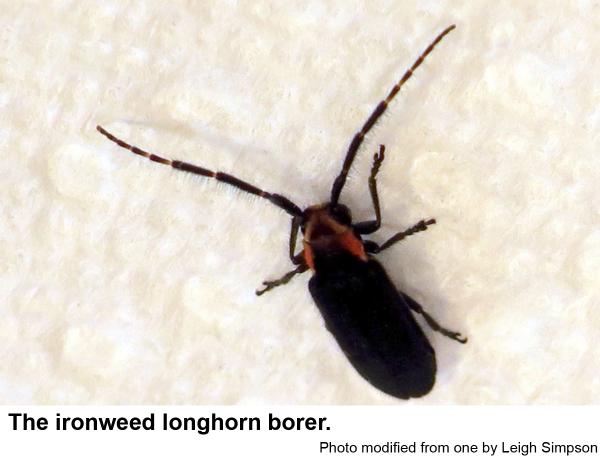 The ironweed longhorn borer is a small beetle.

The ironweed longhorn borer is a small beetle. 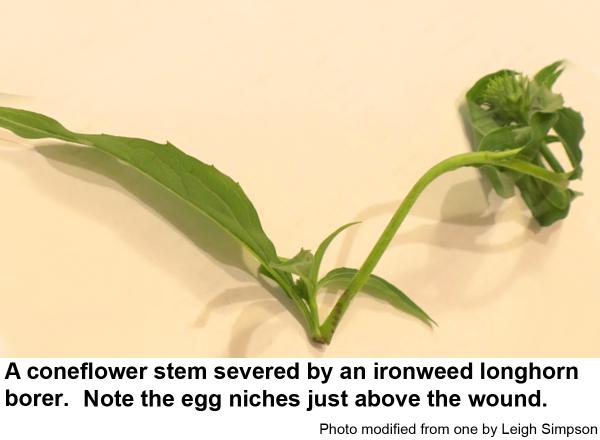 Like some other stem borers, ironweed longhorn borers sever stems after laying eggs.

Like some other stem borers, ironweed longhorn borers sever stems after laying eggs.

Described by Fabricius in the 1798, for a long time entomologists didn't know what host the ironweed longhorn borer used. It has since been reported from ironweed, bloodwort, wingstem (Verbesina) and Echinacea.

This insect is probably not resistant to pesticides as it infests wild plants that are never sprayed with pesticides. Several of the pesticides labeled for landscape use contain pyrethroids has active ingredients. Pyrethroids have a long residual life once applied to a plant. Besides being toxic to insects, they are also repellent to them. However, pyrethroids are toxic to fish, so don't spray them around fish pools and ponds. Several formulations of pyrethroids are available in most big box stores and garden centers. Look at the active ingredient listed in very small letters toward the bottom of the label. Those pesticides ending in "thrin" are pyrethroids. Be sure to follow the directions on the label for safe use, water the plants before treating, and apply the mixture when the plants are in the shade.