The ivory-marked wood borer, Eburia quadrigeminata, is a longhorned beetle about 1/2 inch long. These beetles are brown to golden brown and have four pairs of ivory spots on their wings. Each pair is surrounded by a darker brown halo. The thorax has a small spine on each side. These beetles feed on leaves and twigs. Females lay eggs in the cracks of dead trees. Tiny grubs hatch and bore into the heartwood where they complete their development usually within two years. However, if an infested tree is sawed and milled into flooring or even furniture, these hardy grubs may survive and continue developing at a much slower pace as the wood dries out. New adults may appear some five to seven years later (one example of delayed emergence occured from a birch bookcase 40 years old! Adults are attracted to lights at night. 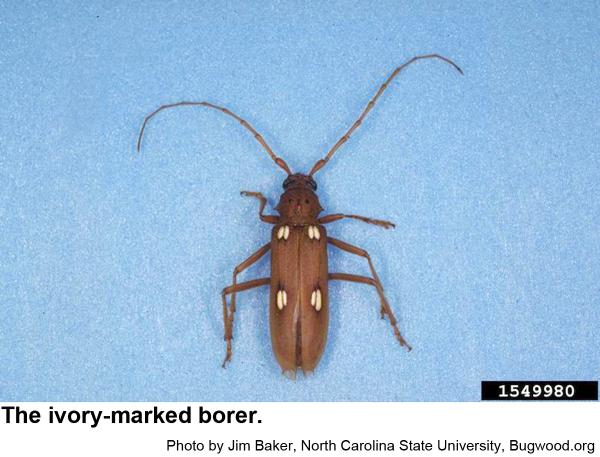 The ivory-marked borer is the only longhorned beetle with four distinct pairs of pale spots on its fore wings.

The ivory-marked borer is the only longhorned beetle with four distinct pairs of pale spots on its fore wings.

Ivory-marked borers do not attack living hardwoods, rather they infest dead hardwood trees including hickory, locust, and ash. It apparently infests dead cypress trees as well.

Because they do not infest living trees, ivory-marked borers are little threat in most landscapes. No chemical control is necessary.