The Japanese beetle (Popillia japonica Newman) is a moderately sized (approximately an inch long) scarab beetle with a bright metallic green in the head/thorax and copper wing covers1. Beetles also have six distinct pairs of white hair tufts along their abdomen that help distinguish it from other similar beetles. An adult Japanese beetle can feed on foliage, fruits and flowers of over 300 species of plants in at least 79 plant families2.

Adults males and females can be distinguished by the spine on the front tibia. In females, the spine is rounded and males it is sharper3. Japanese Beetles have one generation per year, and adult females lay 40-60 eggs in the soil that hatch into grubs about 10 days later4. The grubs feed until October and will remain inactive until spring (March / April) when they start to feed again. In the southeast, grubs will pupate in May with adults emerging in June, starting the process over. 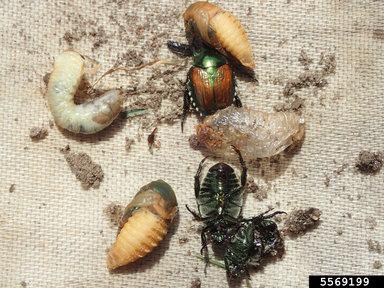 Skip to Damage in Industrial Hemp

Adult Japanese beetles chew holes that can eventually skeletonize the leaves by feeding on the tissue between the veins, leaving a lace-like appearance and can damage flowers. In large numbers, adults can completely defoliate plants. The grubs may cause damage to the roots in the ground prior to May and again in August and September just before harvest3, although they may prefer grass roots. 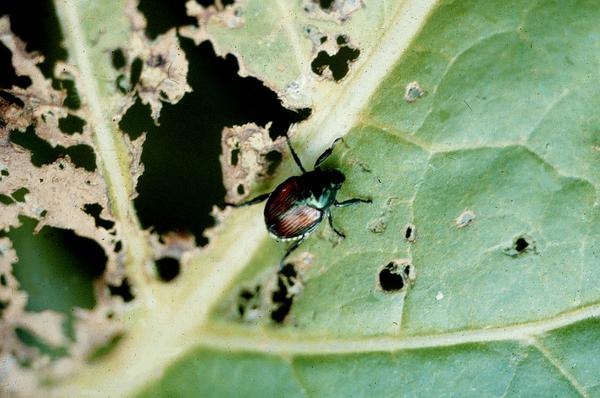 As industrial hemp is a relatively new crop in North Carolina, no research has been done to determine the threshold for concern. Further investigation is needed since the hemp crop is grown for different markets (i.e. fiber, seed, CBD).

Disclaimer: The following recommendations have been known to work in other plant systems, however, their effectiveness in hemp needs further investigation. We are developing a table for industrial hemp materials in the North Carolina Agricultural Chemicals Manual, but for the time being the Industrial Hemp portal is the best resource for up to date information. As laws and regulations are constantly changing in regards to hemp check with your local extension agent with any label or regulatory concerns.

Insecticides registered in hemp are limited. Some formulations of azadiractin, the active ingredient in neem oil, have been shown to have some activity against adult Japanese beetles, and some of the current federally registered pesticides contain azadiractin. Paenibacillus popilliae or milky spore disease may be effective against larvae in soil surrounding hemp fields but is not currently registered in hemp.

1. Japanese beetles in yards and gardens

The information in this factsheet was developed with support from the North Carolina Tobacco Trust Fund Commission.