First reported in North America in 1916, the Japanese beetle now occurs in most of the eastern United States. About 1⁄2 inch long, Japanese beetles are a shiny, metallic green with coppery brown wing covers that extend almost to the tip of the abdomen (Figure 1). Small tufts of white hairs occur at the tip of the abdomen and along each side. Eggs are translucent white to cream and elliptical and about 1⁄16 inch in diameter when first laid. In a few days, the egg becomes more spherical and doubles in size. Grubs are white, slightly curled and have yellow-brown heads. Grubs are about 1 inch long when mature. Unlike other grubs found in turf, it has two rows of spines which form a "V" on the underside of the last abdominal segment. The pupa is approximately 1⁄2 inch long and 1⁄4 inch wide, and it gradually turns light brown and then develops a metallic green cast. 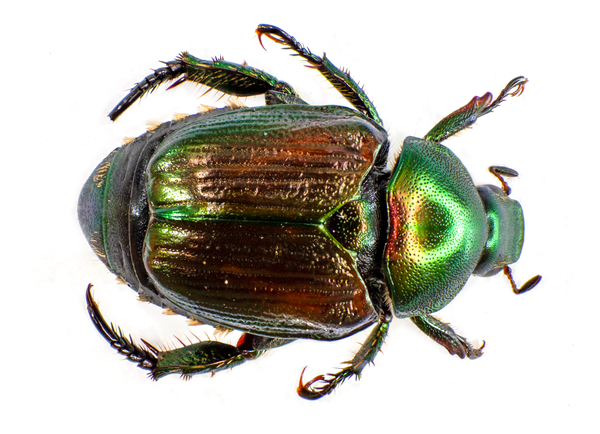 Homeowners can take advantage of the beetles’ aggregation behavior by shaking plants to dislodge beetles each morning. Without beetles already on a plant, it is less likely that beetles will aggregate there later in the day. Picking beetles off by hand will also reduce the accumulation of beetles that results in severe damage. They can be easily knocked into a widemouth jar of soapy water. In some settings, flowers or plants can be protected with cheesecloth or other fine mesh.

Japanese beetle traps may catch up to 75% of the beetles that approach them. However, they are not control devices. Traps may lower beetle populations slightly, but only if placed throughout an entire neighborhood at very high density. This will not be enough to significantly reduce damage on your prized garden foliage. The trapped beetles must be emptied from the traps every one to two days to prevent them from rotting and releasing ammonia which is repellant to other Japanese beetles. The traps are much more effective in attracting Japanese beetles than in trapping them. Consequently, traps should be placed as far away from the plants to be protected as possible. If traps are used, place far away from susceptible plants. Traps alone are not likely to give satisfactory protection to plants being eaten by adult Japanese beetles and pesticides may be required anyway.

If insecticides are desired to protect plants in the landscape, there are a number of products available. For home use, carbaryl (Sevin), malathion, imidacloprid (Merit) are good choices. Many of the newer lawn and garden multi-insect products containing one of the pyrethrins are also effective. Pyrethrin containing chemicals are slightly more persistent. Sevin will protect foliage for about five days, weather permitting, so it would have to be reapplied. Pyrethroid based products may give up to two weeks of foliar protection per application. Spinosad and Neem based products are less effective, but are preferred by some gardeners seeking "softer" chemicals. Homemade concoctions and blended beetle cocktail repellants are slightly effective at best, and may need reapplication every one or two days.