The Japanese beetle (Popillia japonica) is a minor pest of grapes in North Carolina with one generation per year. Females lay eggs in the ground, and larvae grow underground where they feed on the roots of grasses. Active feeding occurs during the fall and spring, but ceases over winter. In North Carolina, larvae pupate underground in May, and adults emerge in June. Adults fly to feed on the foliage of plants and look for mates. Japanese beetles feed on over 300 species of plants, including grapes and other cultivated fruits. 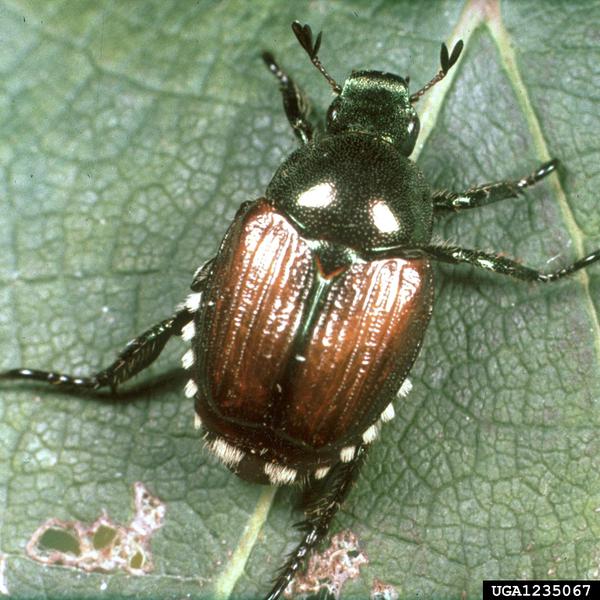 Adult Japanese beetles are around an inch long. They can be distinguished from other iridescent green and bronze beetles by the twelve white hair tufts around the bottom of their abdomens. Photo credit: Clemson University - USDA Cooperative Extension Sli

Adult Japanese beetles are around an inch long. They can be distinguished from other iridescent green and bronze beetles by the twelve white hair tufts around the bottom of their abdomens. Photo credit: Clemson University - USDA Cooperative Extension Sli

Mature grape vines can tolerate a large amount of this foliar damage, and defoliation that occurs before verasion rarely impacts yield. Defoliation is only a problem if it drops below the top trellis wire or newly planted plants. Although unsightly, defoliation above the top trellis wire is actually helpful in opening up the grape canopy, and most of the damaged leaves will be removed during pruning.

Muscadine grapes are rarely impacted by Japanese beetles due to their prolific growth of foliage. European and hybrid grapes are more susceptible, but even then, treatment is usually only necessary to protect newly planted vines that would be stressed by leaf damage. 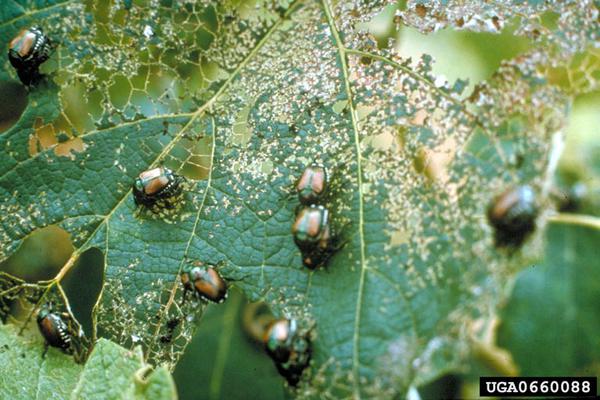 No economic thresholds exist for North Carolina. Growers can visually inspect vines for damage in the summer. We do not recommend the use of Japanese beetle pheromone traps for monitoring. These traps do not provide a reliable indication of damage, and may attract additional Japanese beetles into the vineyard.

Trapping is not recommended

We do not recommend the use of Japanese beetle pheromone traps as a control measure. These traps will not reduce beetle numbers in a cost-effective manner, and may attract additional beetles into the vineyard.

Multiple conventional insecticides exist to control Japanese beetles. Refer to the North Carolina Agricultural Chemicals Manual for the most current recommendations on materials for Japanese beetles.

Treatment is only recommended to protect young plants or if plants are defoliated below the first trellis wire. Treatments applied in other situations are unlikely to be cost effective.

Several neem-based products are labeled for use against Japanese beetles.

Commercial formulations of milky spore bacteria (Bacillus papillae) can be used to control beetle grubs in turf, but application will not prevent adult beetles for flying into vineyards from other areas. As such, applications in vineyards are unlikely to be cost effective. Several species of wasps and flies parasitize Japanese beetles. These parasitoids are naturalized in North Carolina and do not need to be purchased for release.