The lantana lace bug, Teleonemia scrupulosa, is a small (about 1/8 inch long), relatively slender, grayish-brown insect with conspicuous, dark antennae. The thorax has three ridges, and the forewings have ridges that form an "X" when at rest. This lace bug flies readily during the summer. Native to the Gulf Coast southward into South America, it occasionally reaches North Carolina. Five or six days after the last moult, females insert eggs in bunches of 10 to 30 into the undersides of leaves usually in the midrib or larger veins. About a week later, spiny nymphs hatch and begin to feed. Nymphs develop through five stages for 12 to 18 days before molting into adult bugs. At least two generations are possible here. The last two stages have noticeable wing pads. The lantana lace bug cannot overwinter successfully in North Carolina. 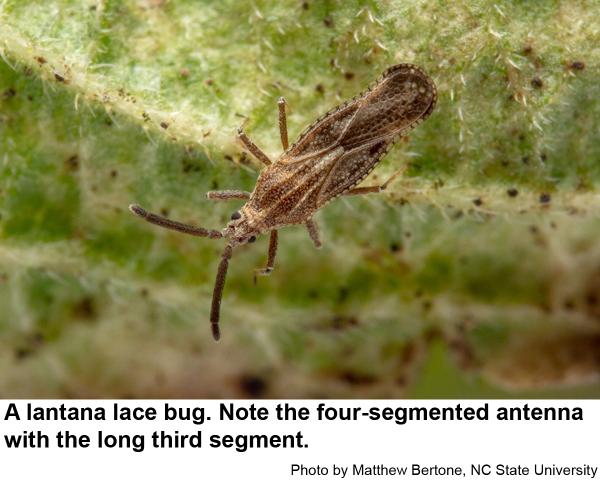 Lantana lace bugs are relatively slender and have conspicuous antennae.

Lantana lace bugs are relatively slender and have conspicuous antennae. 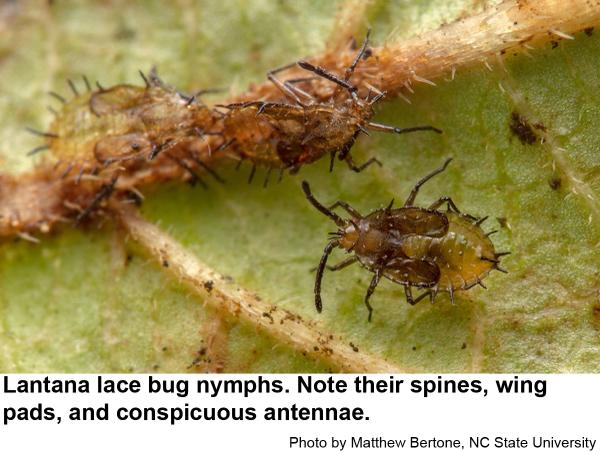 Lantana lace bug nymphs are small, spiny, and are dark.

Lantana lace bug nymphs are small, spiny, and are dark.

The lantana lace bug feeds primarily on lantana but occasionally infests other plants such as sesame. On Lantana, the lace bug feeds on the undersurface of the leaves and even feeds on newly opened buds and flowers. The cast skins on nymphs may remain attached to the underside a well as numerous dark spots of excrement. Pale spots appear on the top surface where the bugs feed underneath, and heavily infested leaves become almost white before dropping from the plant. On purple sage, this lace bug feeds on the upper and lower surfaces of the leaves where the dark fecal drops are conspicuous. 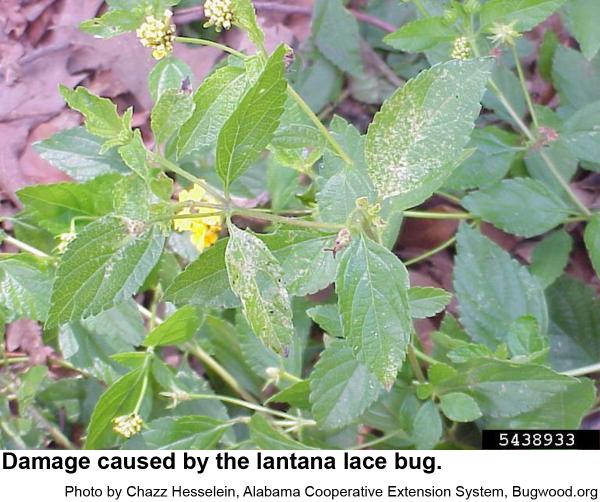 Dr. Steve Frank lists a bunch of chemicals for control of lace bugs ranging from soap to pyrethroids in his insect note on lace bugs. The following are some of those available for residential landscape use. Soaps have the advantage of not leaving a toxic residue behind that might kill the teeny-weeny wasps that parasitize lace bug eggs. Imidacloprid is the active ingredient of several formulations found in garden centers. This nicotinoid has the advantage of being systemic and can be sprayed on or applied to the soil beneath infested plants. Imidacloprid is purported to cause mad bee disease, so when the lantana come into bloom, residues of imidacloprid can migrate into the flowers and contaminate the nectar. The pyrethroids bifenthrin, lamda-cyhalothrin,and permethrin are toxic to insects and fish. They persist for a long time on plants and are harsh on beneficial insects and mites, but they are available and they kill lace bugs. Two "traditional" insecticides labeled for lace bugs are the carbamate Sevin that is widely labeled for vegetables and ornamentals and the organophosphate Orthene. Orthene is systemic as well as toxic to insects on contact. It has a no-nonsense odor that warns the user and other people in the landscape not to mess with the treated plant. All of these pesticides are available the garden section of big box stores and in garden centers and nursery outlets.