Leafminers in the family Agromyzidae are small and usually dark flies. Some species have yellow markings. These flies are fairly similar and are more easily recognized by their host plant and the damage to the host plant than by the insect itself. Some leafminer maggots make serpentine tunnels that increase in size as the maggots grow. Other species make blotch mines or mines that are intermediate. This note does not pertain to the boxwood leafminer (Boxwood Leafminer), a gall-forming fly belonging to a different family.

The larkspur leafminer causes blotch mines in the leaves of delphinium, larkspur and aconite. Females lay eggs in the leaf and the maggots make mines as they feed between the upper and lower leaf surface. Mature maggots crawl from the mine to pupate on a leaf nearby. There are several generations per year. Infested leaves look as though they have been blighted by a disease. Heavy infestation can cause significant damage to plant appearance though on large trees they are less noticeable.

The holly leafminers make typical serpentine mines in the leaves of hollies. They may also leave tiny pin hole scars from egg-laying. The maggots pupate at the large end of the tunnel and the adult fly emerges from a hole in the pupal skin and the upper leaf surface. Each species of holly has its own leafminer species. Deciduous holly leafminers have several generations per year, whereas the leafminers of evergreen hollies have only one generation per year. Leafminer maggots have parasites that often decimate the leafminer population. 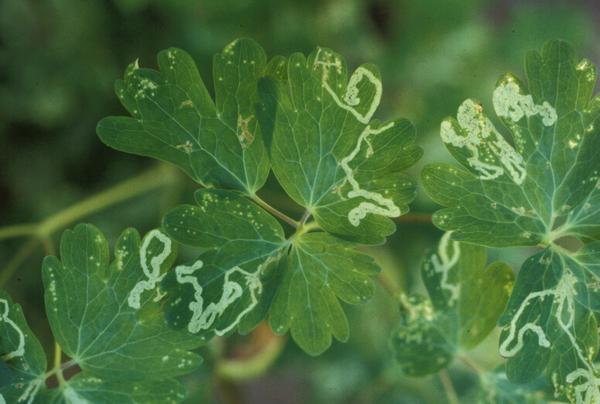 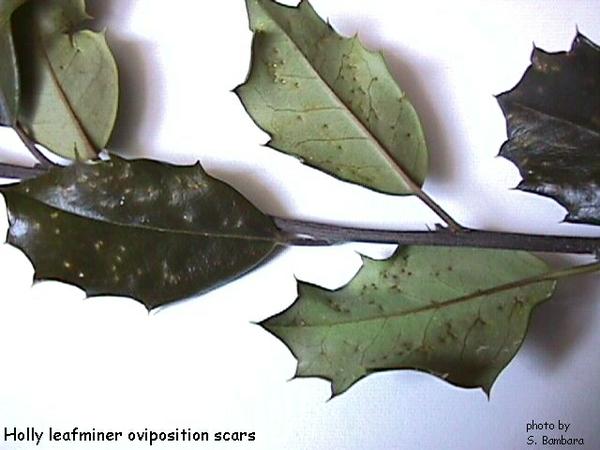 Because leafminers are plagued by parasites, it may be better to rely on parasites to suppress leafminers than to apply pesticides that might eliminate the parasites and force the amateur horticulturist into an ongoing spray program.

For the leafminer flies of evergreen hollies, timing of pesticide application is important for optimum suppression. If the leafminers appear to be getting out of hand, one strategy is to realize that the adults emerge in the spring to lay eggs in new leaves. In early April place several infested leaves in a dry plastic bag in the shade. When the small, dark flies are found in the bag, that is the perfect time to spray. Because leafminers are usually protected by the leaf surface on top and bottom, systemic pesticides (pesticides absorbed and translocated by the plant) should be given consideration for control. The foliage of susceptible plants should be observed for early signs of an infestation. When tunnels are first noticed, pesticides can be used for control on annual and perennial flowers and hollies. Read and follow labelling directions and warnings carefully!