Female longtailed mealybugs, Pseudococcus longispinus, have 17 pairs of waxy filaments around the peripheryand are up to 1/8 inch long. On mature specimens, the caudal (tail) filaments are as long as or longer than the yellowish to grayish body (unless the tail filaments have broken off). Overall length maybe 1/4 inch. Nymphs are similar to the larger adult female except that the filaments around the edges are shorter. Most species of mealybugs lay eggs in a dense, waxy mass called the ovisac, but the eggs of the longtailed mealybug hatch almost immediately so that they appear to be born alive. The males pupate in a fluffy cocoon of wax. Although longtailed mealybugs were first described in 1867, not much has been published on their biology. Females appear to give birth to live young on a shallow pile of white waxy secretions. Because the females are wingless, they must be brought into proximity of a host plant before it can be infested. 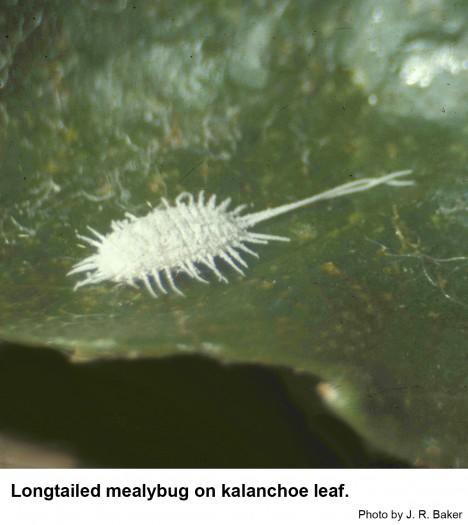 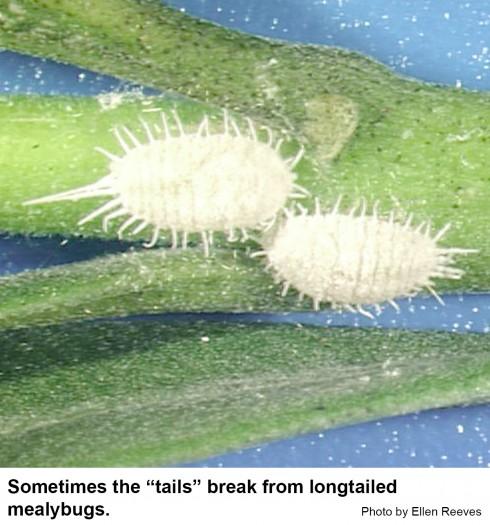 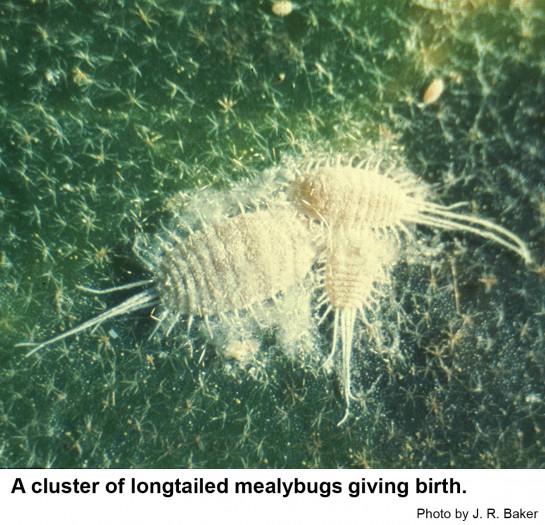 A cluster of longtailed mealybugs.

A cluster of longtailed mealybugs.

Skip to Host Plants and Damage

Longtailed mealybugs have been found on at least 26 plant families. Dracaena appears to be the favored host, but most flowering and ornamental foliage plants are susceptible. Mealybugs suck out sap and excrete honeydew, a sweet sticky liquid. The mealybugs, honeydew, male cocoons, and the ovisacs disfigure infested plants. Not only that, but as the mealybugs feed, they inject their saliva into the plant. Some very sensitive plants may wilt and die when large numbers of longtailed mealybugs are feeding.

A small wasp, Anagyrus nigricornis, parasitizes longtailed mealybugs, and a small, predaceous, brown lacewing insect feeds on longtailed mealybugs. Lontailed mealybugs are sometimes difficult to control, even though there is no egg stage protected by a dense ovisac. If many plants are infested, they should be dipped or sprayed thoroughly with a pesticide mixture. Unless a systemic insecticide is used, it is best to retreat two or more times at weekly intervals. Retreatment will control mealybugs that were missed by earlier control efforts. If only a few plants are infested and the number of mealybugs is low, mealybugs can be removed with a cotton swab dipped in rubbing alcohol. The plant can then be washed with a mild soapy water to remove residual wax and honeydew left by the mealybugs (about 2% soap, not detergent). The plants must be observed closely for a few weeks and new mealybugs removed as they appear. Soaps labeled for use as insecticides for mealybug control on ornamental plants include Safer's, Citrusoap, and Olympic brands. These soaps are available from garden shops and plant centers. Insecticidal soaps are popular with some horticulturists because of their relative safety to people. Houseplant sprays and granular treatments are also available for home use. If labeled for mealybugs, they should give adequate control.