Managing Cereal Rye for Benefits in Cotton and Soybeans

Cover Crop Use in North Carolina

Skip to Cover Crop Use in North Carolina

Skip to Why Cereal Rye?

Most cover crop benefits are correlated with biomass production—the more biomass, the more benefits. Cereal rye is the highest biomass-producing winter cover crop that can be grown in North Carolina. Cereal rye also breaks down slower than many other species of cover crops due to a high carbon-to-nitrogen ratio. Cereal rye seed is readily available across the state and relatively inexpensive. It is also resilient and can grow well across a range of production systems.

Even when using optimal cereal rye management practices, weather can have a large influence on biomass production. In 2019, a series of on-farm trials were conducted across North Carolina to investigate the benefits of a cereal rye cover crop mulch in cotton and soybean production. On-farm cooperators were asked to drill cereal rye at a minimum of 90 lb/A by the end of October. Growers then applied 20 lb N/A at two to three weeks after cereal rye planting in an effort to optimize biomass. Growers terminated the cover crop via rolling and herbicide burndown after April 15. Despite managing cereal rye for optimal biomass production, cover crop biomass levels were 1,830 to 5,650 lb dry biomass/A (Table 1).

Cereal rye can be terminated via herbicides, cultivation, or rolling. Each method has advantages and disadvantages. Using herbicides for cover crop termination can be very effective and facilitate planting into standing cereal rye when a roller is not available. Rolling cereal rye for termination has become increasingly popular for terminating cover crops. A roller-crimper (Figure 1) can be purchased, or growers can fabricate their own rollers (Figure 2). Rollers can be front- or back-mounted on a tractor, and there are even new roller units that can be added directly to a planter. If rolling cereal rye is the sole method of termination, soft dough stage should be targeted for termination. Rolling the cereal rye in the opposite direction in which it was drilled can aid in covering the soil surface and optimizing benefits. Cash crops should be planted in the same direction in which the cereal rye was rolled. Many producers will combine herbicide burndown and rolling as a method of termination. 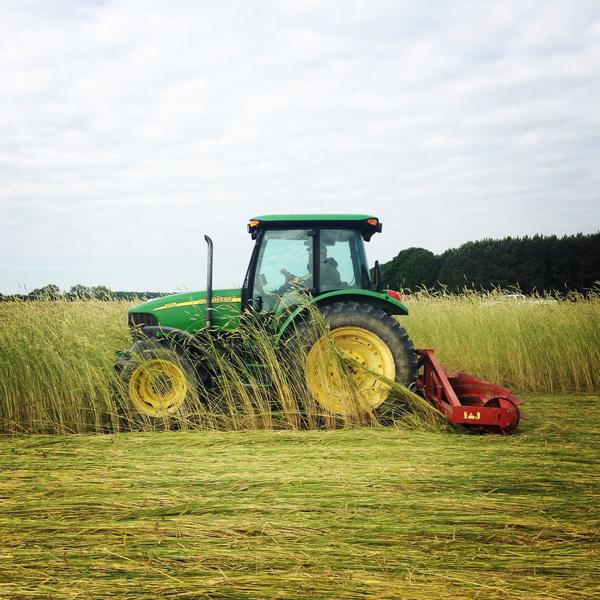 Impact on Cotton and Soybean Stand

Skip to Impact on Cotton and Soybean Stand

One of the largest challenges associated with using cereal rye as a cover crop is getting a good cash crop stand, especially when the cereal rye is rolled onto the soil surface. Growers using this system often have to spend several years modifying their planters to move the cereal rye residue in ways that facilitate optimum seed-to-soil contact. In previous cover crop research conducted in North Carolina, cotton stand was reduced when planting cotton into both a rolled and standing cereal rye cover crop mulch (Figure 3). Soybean stand can also be adversely impacted if good seed-to-soil contact is not achieved when planting the cash crop. Cotton and soybeans are two of the more flexible row crops for compensation of yield from stand loss. Because stand reduction when planting into a cover crop mulch can occur, this flexibility is a benefit of these two crops planted into a cereal rye cover crop mulch compared to a crop like corn that is very sensitive to stand loss. If the inability to penetrate through the residue becomes severe, yield losses will occur for cotton and soybeans. It becomes increasingly difficult to penetrate through the cover crop residue if the residue is not removed from the crop row or if the residue has any moisture. In 2019, soybean seeding rate was evaluated at three locations in which soybeans were planted into a standing cereal rye cover crop (Table 2). Cereal rye biomass levels ranged from 3,740 to 8,180 lb dry matter/A. Seeding rate had no impact on yield (PS=NS, Figure 4), indicating that currently recommended soybean seeding rates are adequate for planting soybeans into a cereal rye cover crop. 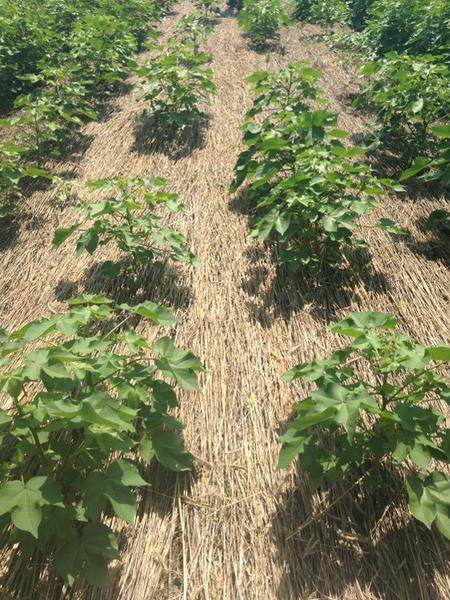 Figure 3. Gaps in cotton stand from the inability of the planter to penetrate through the cereal rye cover crop mulch, ultimately causing hair-pinning of the residue into the seed furrow.

Figure 3. Gaps in cotton stand from the inability of the planter to penetrate through the cereal rye cover crop mulch, ultimately causing hair-pinning of the residue into the seed furrow. 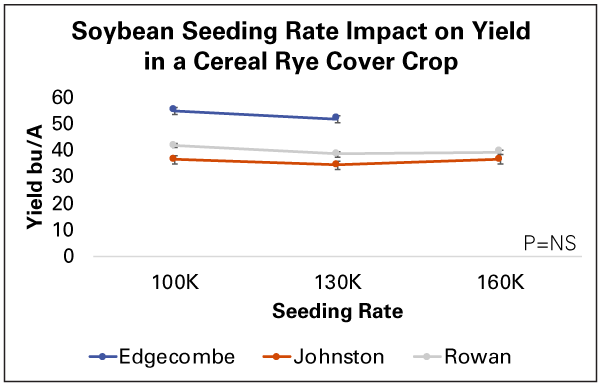 Figure 4. The impact of soybean seeding rate on soybean yield when planted into standing cereal rye at three locations in 2019.

Figure 4. The impact of soybean seeding rate on soybean yield when planted into standing cereal rye at three locations in 2019.

One of the primary benefits of the rolled cereal rye system is improved soil moisture retention. High biomass cover crops such as cereal rye provide a noticeably thick layer of organic matter cover on the soil surface, compared to some of the standard cover crop programs that have been used for several years, such as sown or drilled wheat. Immediately after cereal rye is terminated and rolled, a 2- to 3-inch layer of thick ground cover is established on the soil surface, assuming biomass development was sufficient. This layer of organic matter allows for improved rainfall penetration into the soil, with less runoff compared to bare-ground or minimal-ground cover systems. It also serves as a barrier that reduces direct sunlight from reaching the soil surface and reduces evaporation of moisture directly from the soil surface.

North Carolina frequently experiences episodic drought within a given growing season. This common occurrence, coupled with a low percentage of irrigated acreage, increases the likelihood of yield loss resulting from even short-term dry spells that occur during the summer months, especially on sandier soils. In some cases, a high biomass cover crop system could retain soil moisture for a longer period of time and extend received moisture to reduce the length and severity of short-lived dry spells. In our 2019 research, soil moisture was conserved variably across our sites (Table 3). In excessively dry years, this could minimize crop stress and yield loss resulting from episodic drought. Figure 5 illustrates the effect of the heavy rolled cereal rye residue on surface moisture retention compared to bare ground, where sunlight causes evaporative losses of surface moisture.

Higher soil moisture retention could also bring about some challenges. Cotton is known to be very sensitive to cool, wet weather during emergence and soon after. A cereal rye cover crop mulch could retain moisture at adversely high levels during the planting season, which could prolong cotton emergence or reduce stands if moisture is excessive and temperatures are cool. In hot, dry springs, however, this system could retain moisture to ideal levels for planting. Timing of cover crop termination, with special attention given to prevailing weather, could help improve the chances of success when implementing a cereal rye cover crop.

Prior to termination, the cover crop is often using more soil moisture compared to fallow ground. In springs where temperatures are warm and moisture is limited prior to planting of the summer crop, it may be problematic if cover crop termination occurs in close proximity to cash crop planting. In these scenarios, the cover crop should be terminated when maximum biomass is reached several weeks prior to planting. In wet springs, growers often find that cover crops that used soil water facilitated earlier cash crop planting. 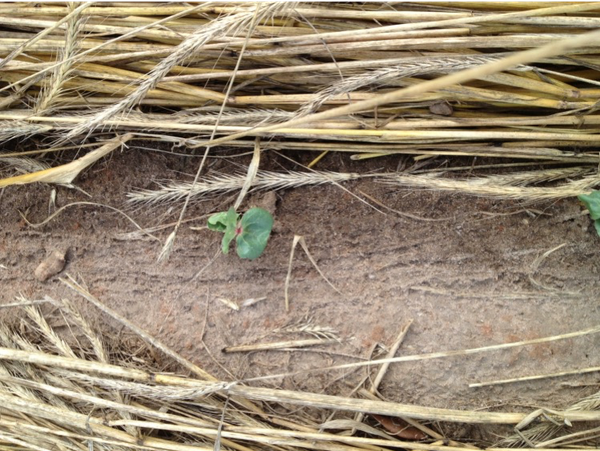 To suppress small-seeded summer annual weeds species such as Palmer amaranth (pigweed), >5,000 lb dry biomass/A is generally recommended. This level of biomass production can be difficult to achieve in most situations. However, even if >5,000 lb dry biomass/A is not achieved, the benefits to weed management remain. For example, only 4,760 lb dry biomass/A were produced at the Edgecombe County location during 2019 (Table 1). Despite modest cover crop biomass at this location, cereal rye reduced Palmer amaranth and annual grass density approximately 90% compared to fallow treatments 50 days after planting (Figure 6). Previous research has determined that cover crops will not completely replace the need for herbicides. They can, however, alleviate selection pressure for herbicide-resistant weeds. At this location, Liberty (glufosinate) was applied postemergence just after weed densities were collected. Because the cereal rye cover crop reduced Palmer amaranth density by 90%, the chances of selecting for a Palmer amaranth biotype resistant to Liberty in the cereal rye treatment were less compared to the fallow treatment. Weed pressure at the other 2019 research sites was minimal.

In addition to summer annual weed suppression, the use of cover crops to manage winter annual weed species prior to cash crop planting has been undervalued. At the Northampton County site, cover crop biomass totaled just 1,830 lb/A. Although not adequate for suppression of summer annual weeds like Palmer amaranth, cereal rye at this location did have an effect on horseweed, another troublesome herbicide-resistant winter weed (Figure 7).

At this site, the cereal rye cover crop reduced horseweed density 98% compared to the fallow treatment (Figure 8). Similarly, fallow treatments averaged one dogfennel plant per square meter compared to none in plots planted with cereal rye. Furthermore, horseweed present in the cereal rye plots were smaller and more easily controlled by Gramoxone (paraquat) applied prior to cotton and soybean planting (Figure 9). Applying herbicides to large weeds has the similar effect of applying reduced rates to smaller weeds, which has serious resistance implications. Reduced rates or full rates applied to large weeds selects for tolerant individuals within the population; over several seasons, this practice can eventually lead to resistance. 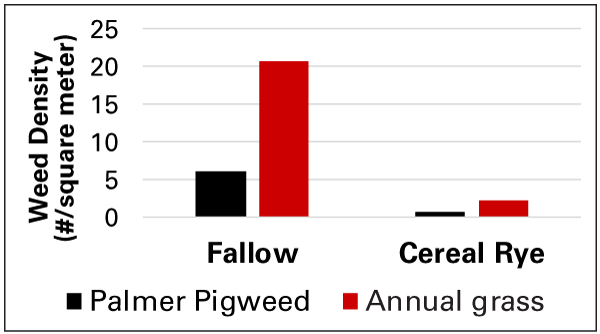 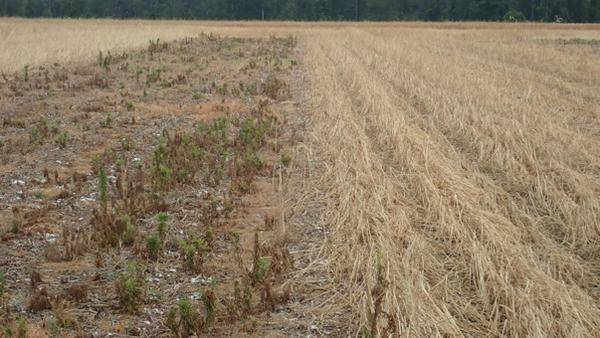 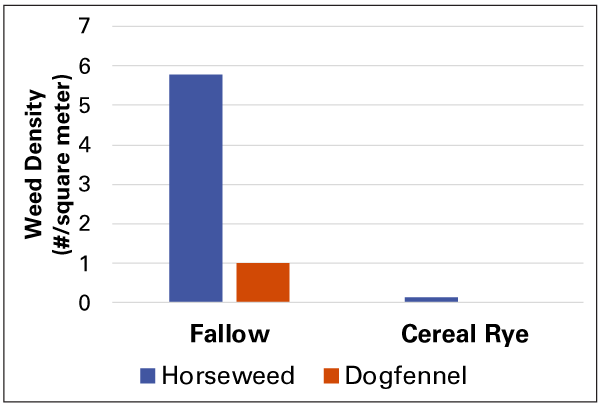 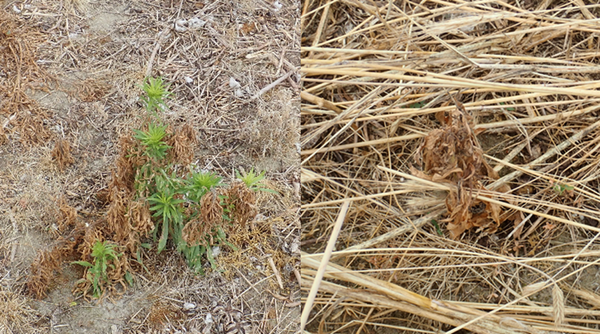 Skip to Cereal Rye Impact on Cotton and Soybean Yield

Despite multiple documented short-term and long-term benefits from a cereal rye cover crop mulch in cotton and soybean fields, the effects on yield are variable. In the series of trials conducted during 2019, cotton and soybean yields were generally not affected by the presence of a cereal rye cover crop mulch regardless of achieved cover crop biomass (Figure 10a and Figure 10b). Soil moisture at these sites was likely adequate to prevent yield limitations. However, there are many scenarios in which the duration and severity of drought can negatively affect yields, and in some cases, yields can be improved by the use of a cereal rye cover crop. There was one site where cotton yield was actually reduced by the use of cereal rye cover crop, which was likely due to difficulties at planting in achieving adequate cotton seed-to-soil contact. At the same site, soybean yield was unaffected by lower stand, demonstrating the plasticity of this crop to various populations. 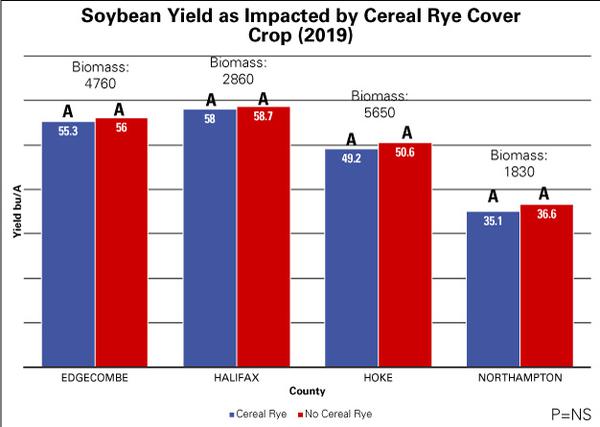 Figure 10a. Soybean yield as impacted by the presence or absence of a cereal rye cover crop mulch across trial sites in 2019.

Figure 10a. Soybean yield as impacted by the presence or absence of a cereal rye cover crop mulch across trial sites in 2019. 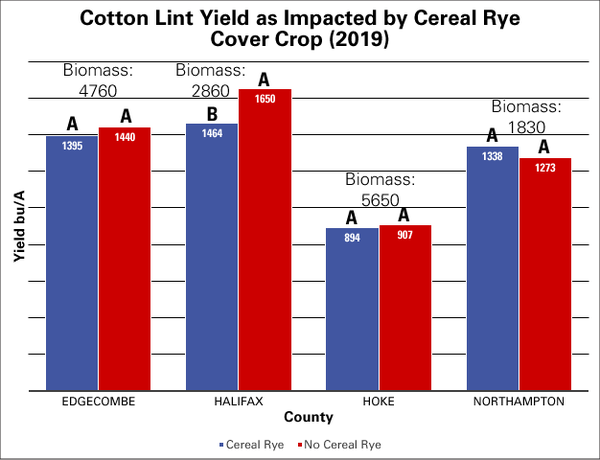 Figure 10b. Cotton yield as impacted by the presence or absence of a cereal rye cover crop mulch across trial sites in 2019.

Figure 10b. Cotton yield as impacted by the presence or absence of a cereal rye cover crop mulch across trial sites in 2019.

Multiple short-term benefits can be achieved by using a cereal rye cover crop mulch in cotton and soybeans; however, benefits such as weed suppression and soil moisture retention do not always lead to cash crop yield increases. 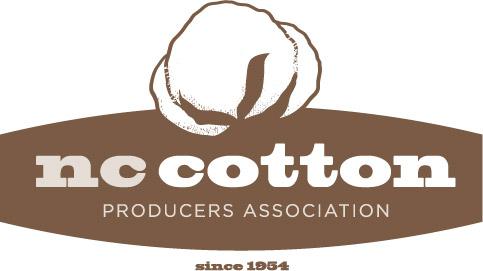 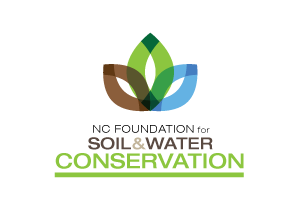 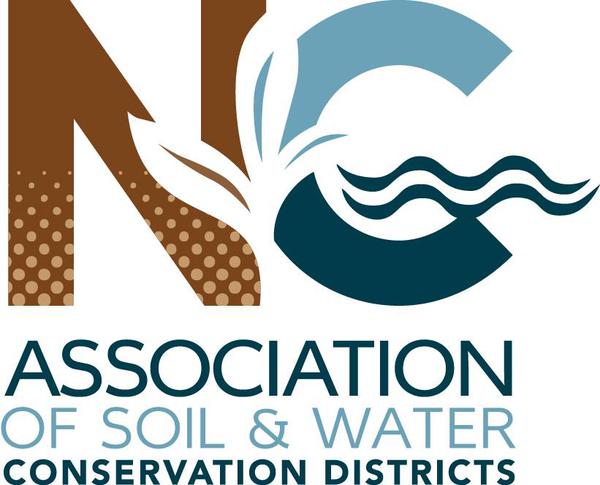